What's that incessant beeping noise?  Peepers, you know what that is? That beeping beep-beep-beep noise.  It's driving me nuts.  MOUSES!

What, you don't have an answer, Peepers?  It's some kind of secret, huh? Well if the beeping outside doesn't stop soon, I'm going to have to send you out there to investigate.  I'd check it out, myself, but I think it's coming from down the road and as you know I, Seville the Cat, am not allowed out on the road.  Remember?  MOUSES!

If peeps wanna keep secrets, they should keep them quietly.

But speaking of secrets...  You know, my Peep #1 loves a good secret.  She really does.  Honestly and truly, for sure.  Peep #1 simply LOVES a secret.

I think it's because she grew up on Nancy Drew books and stuff.  Way back when, in the golden olden days, when she was a mere kitten herself, she read all those Nancy Drew and Hardy Boys books.  Then sometime during the Jurassic Age, when she was a little older, she decided that when she 'grew up,' she wanted to be Jessica Fletcher.  Little did my peep know that when she grew up, she'd just be the peep.  MOUSES!

I've heard that one time, way back when, during the times of dinosaurs and whatnot, Peep #1 went to Toronto for a week.  She was like ten or something.  Anyway, when in Toronto at that time, she went to this house or castle or whatever it was, where there was supposed to be a secret passage. The peep was so excited.  She was going to get to find a real secret passage just like the ones Nancy Drew used to find.

Long story short, her secret passage hunting adventure turned out to be the disappointment of the decade for the peep.  Let me just say this...  It's not a secret passage if you open the door to the passage and put up a big sign with an arrow saying, "SECRET PASSAGE" next to it.  You do that and it's just a passage.  MOUSES!

That's the thing about secrets.  You've got to keep 'em secret.  You've go to be quiet and stealthy and stuff or they won't stay secrets at all.

Case in point, the incessant beeping noise is not going to remain secret much longer because as it's loud enough to annoy me, I'm going to have to send out a reconnaissance team to find out what it's all about.  And when I say reconnaissance team, I actually mean the peep.  Hope she's up for the task.  Maybe there will be a big sign with an arrow plastered to whatever is making that noise to guide her on her way.  That should help her out, for sure.  MOUSES!

But do you know what?  We have a real live secret right here at my house!

Long, long ago, during ancient times and before I was born, the peeps moved into this here house. In the front yard next to the driveway, grew a hedge.  Not a great hedge.  Just a hedge.  Peep says she thinks it was free or something.

Anyway, every year Peep #1 has to trim that hedge and truth be told, she's not very good at trimming hedges.  Not once in recorded history has the top of the hedge ever been parallel to the ground.  It always kind of slopes after the peep goes at it with the trimmer.  Not that she doesn't try to trim it evenly.  Not that she doesn't try really hard.  Her trying is just not good enough, you see.

What's more, not only does the hedge always slope but it's never really straight, either.  And there are always a few odd pieces sticking out, here and there.  Pieces she couldn't reach or something, I think.  The hedge is a little on the tall side and even with the step stool, the peep has problems.

One year however, she was totally ruthless.  So ruthless, in fact, that said hedge has never quite recovered.  One more issue with the appearance of the hedge.  MOUSES!

But in her ruthlessness, Peep #1 made a discovery.  She discovered...  Wait for it...  Drum roll, please.

She discovered a secret stone wall!

Okay, it's not really a wall.  It's only a foot or so high and actually, it's only a foot high at one end. At the other end, it's much lower.  Almost fades into nothingness, I do believe.  Apparently, the stone wall slopes just like the hedge.  MOUSES! 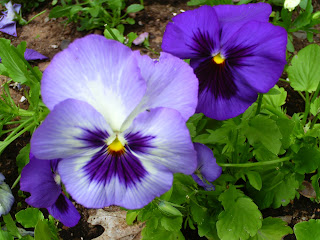 But it is made out of stones.  Stones, rocks, whatever.  And the best part of the wall is that it's a secret!  It's true. The peeps never knew it was there.  It was completely hidden by that big old overgrown hedge.  Could you believe it? Peep #1 said discovering the wall was like finding the secret passage she never got to find.  You know, the passage that wasn't a secret as there was a sign pointing to it and explaining what it was.  Of course, the sign was all wrong.  The sign should have read, "PASSAGE," and not "SECRET PASSAGE" because the posting of the sign ruined the whole secret part, for sure.  MOUSES!

Anyway, as my peeps did not post any "secret stone wall" signs with arrows and as the stones did not squeal like stone wheels skidding out of Bedrock, Peep #1's little discovery remained a secret. No one else knew it was even there.

But earlier this year, Peep #1 took the plunge.  No, she didn't post a "secret stone wall" sign.  What she did instead, was shocking.

The peep started hacking away at that old hedge.  Little by little, she has been removing the hedge. It's pretty slow going; partly because she can only get rid of one green bin's worth of hedge bits every two weeks but mostly because she doesn't really know what she's doing.

But I have to say, I was looking at the hedge just yesterday and I do believe Peep #1 has managed to get rid of about a third of it.  The roots are still there, though, and I don't know what she intends to do about them.  Don't think she knows, either.  Paws crossed she can figure something out because to be perfectly honest, hedge roots with no hedge look pretty darned silly, for sure. MOUSES!

As the peep started at the end where the hedge and stones were at their lowest, the secret wall has not yet been exposed but once it is, the secret will be out for all the world to see.  Well, anyone walking down the street, at least.  Peep says she's going to plant some pansies along that stone wall.  Blue pansies with a hint of lavender.  She says they'll look lovely up against the bluish-grey stones.  I, on the other paw, am not so sure.

Let me explain.  Being a cat, I'm much shorter than the peep.  Not that I'm short or anything.  In cat terms, I'm really quite tall.  Taller for a cat than the peep is for a peep!  No one ever accused my peep of being tall.

Anyway, let's just say I have a different vantage point of the stone wall than does the peep and from my vantage point, I have to say, I kind of think that said stone wall is sort of holding up the front yard.  It's true.  The front yard is higher than the driveway by about a foot, at one end. Coincidentally, that is the very same height as the secret stone wall.  MOUSES!

But the peep is bound and determined she's going to get rid of that hedge and that next year when the pansies are blooming, they're going to look all pretty and stuff.  Pretty as a picture, she says. Personally, I'm still picturing the collapse of the front yard but to each his own, right?  Nah, that can't be right.  If one of us is going to be correct, it's bound to be me.  Hope Ol' Peepers likes the picture of stones from the stone wall rolling all over the place.  MOUSES!

The peep is willing to admit that once the hedge is all gone, the secret of the secret stone wall will be secret no more.  She's got that right.  The only secret neighbourhood peeps will be talking about then is how the peep manages to get herself dressed in the mornings which may, in fact, be one of the better kept secrets of the twenty-first century.  Truth is, I help her pick her clothes out. The ones I don't shed all over are the ones she has to wear.

Oh-oh, I've just let the cat out of the bag and the dressing secret is now a secret no more.   Awww...  MOUSES!

But peeps will be talking.  They'll be talking, for sure, because let me tell you, if the peep's removal of the aforementioned hedge causes the front yard to collapse, watching her try to uncollapse it is going to be the talk of the town. Town, street, whatever.

Back to the original secret.  The incessant beeping noise from down the street has stopped. Interesting.  I guess that that is one secret that will remain secret after all.  MOUSES!

Posted by Seville at Nerissa's Life at 19:53