head in the sand

Feeling a little peckish, I sauntered into the kitchen only to find my sister, Mason, already snacking on a bowl of kibble. "That the best on offer today?" I asked.

"Looks like it.  Checked on the island but there was nothing save a vase of sweet peas."

"Why would you want to save a vase of sweet peas, Mason?"  I shook my head, trying to figure out what sweet peas had to do with savings accounts.  I then glanced in the direction of the refrigerator and a brilliant idea came to mind.  "Mason, help me with this door, would you?"

Mason stopped eating her kibble.  "Do you think we can get it open?  I tried earlier but with this new fridge, I can't reach the handle.  All I could open was the freezer part at the bottom and everything in there was frozen."

I braced myself on all fours.  "Hop on my back, Mason.  You should be able to open the door if I give you a boost."

Within five minutes, we had the fridge door open.  Standing on our hind legs, we stared inside.  The top shelves were out of reach but there, on the bottom shelf, was a box of Camembert.  With one swipe of a paw, I had that cheese onto the kitchen floor and out of its box.  Success.

Mason smacked her lips with pleasure.  "That was delicious!" she declared, "even if it was a tad on the cold side.  Ice cold Camembert isn't nearly as bad as I've heard it to be.  Pass me some of those broken crackers, would you Sivvers?"

I obliged by stomping on a few crackers and pushing the broken bits over to my sister before stating, "That was good.  I think I'll take a little nap.  Maybe I can score some tummy rubs or something from a peep," and off I went in the direction of the family room.  Minutes later, I was sound asleep.

"Awww...  MOUSES!" I mumbled under my breath.  I let out a big yarn.  A HUGE yawn. My teeth gleamed in the moonlight streaming through the family room window.

The little grey mouse standing before me and clutching a mouse-sized clipboard, sniffed the air. "You have cheese breath," he declared.  "Camembert, to be exact.  No wonder I was sent to summon you tonight."

"Better cheese on my breath than mouse, I should think," and I slowly rose to my feet.  Getting in a good stretch, I asked, "What is it this time?  What has The Big Cheese done now?"

"He hasn't done a thing," explained the little grey mouse.  "That's the whole problem.  Please follow me as I'm on a tight schedule."

"You're always on a tight schedule," I muttered while following the little grey mouse out of the room. "Sometimes I think you just make that schedule stuff up.  Just once I'd like to actually see that schedule of yours."  We turned the corner and, as expected, the air in what should have been the kitchen turned thick and hazy.  Coloured lines swirled before my very eyes and flashes of light burst here and there.  We had arrived in the great hall of Mouseland.

I peered around but saw no sign of any mice anywhere.  As if reading my mind, the little grey mouse explained how it was summer break.  "Then why am I here?" I asked him.  "Surely I must deserve a summer break from Mouseland, too."

The mouse just stared at me as if I had said something ridiculous.  "Please..." he uttered in an exasperated tone.  "Come this way."

Obediently, I followed the mouse to the end of the hall and watched as he magically disappeared through a wall.  "MOUSES!"

"Mice." I heard emanating from beyond the wall.  "The plural of mouse is mice."

"Ah-hah!  The grammar mice aren't on holiday," I declared.  "Wonder if I can walk through that wall, too."  I closed my eyes and forged ahead.  "OUCH!"  I rubbed my nose where I had smacked it into the wall.  "Darn it.  Why didn't that trick work for me, too?"

I opened my eyes and the wall before me moved.  The little grey mouse stood on the other side, staring up at me.  "Mr. Cat, it's not a wall.  It's a door.  I walked though that little mouse hole at the bottom.  You, on the other paw, need to use the doorknob and open the door!"

"Oh, yeah.  Knew that," I said, still rubbing my nose and crossing my claws that it wouldn't leave a bruise.

"Hurry up, Cat.  We're running late.  I'll brief you along the way.  I need you to have a little chat with The Big Cheese."

"But I thought you said he didn't do anything."

"I did," explained the mouse, "and that's why we need you to talk to him."

Before long, I was standing in front of an office door. Not willing to fall for the same trick, twice, I reached for the doorknob and turned it.  The door opened and a blast of hot air hit me in the face.  I jumped back in shock and disbelief.

It wasn't just the temperature of the room I found to be disturbing.  It was its appearance, too.  The floor was covered in several inches of sand.  Wall-to-wall sand, everywhere.  And on those walls surrounding the sand, were pictures of ostriches.  I looked at the pictures and then at the little grey mouse. "The Big Cheese likes them," he explained, shrugging his shoulders.  "I don't know why. He just does."

The Big Cheese was in the office, too.  He was lying on his back next to a mouse-sized refrigerator that was chugging away as all get-out, trying to keep cool in the rising temperatures.  The door to the fridge was open and every now and then The Big Cheese would reach inside to extract a paw full of soft cheese.  I momentarily wondered if said cheese was Camembert which should be served at room temperature but not when the temperature in the room was this high.

I peered inside The Big Cheese's fridge and saw that it was stuffed to the brim with various types of soft cheese.  Then I looked outside the office window and saw truck after truck after truck, lined up on the street.  Each one clearly belonging to the Canadian Cheese Consortium and every one packed full of soft cheese.  Suddenly I realised exactly what was going on.

"You can't just ignore it," I said to The Big Cheese.  "Ignoring the facts won't make them go away."

The Big Cheese turned toward me and I saw gooey melted cheese dripping from the corners of his mouth.

"Just look at you, man!  I mean mouse!  I mean man!" I cried.  "LOOK AT YOU!!!  Lying here in this sweltering heat, pretending that everything is normal.  Pretending there aren't truckloads of soft cheese lining the streets due to a glut of soft cheese on the world market.  Bet that glut has lowered its price, and all.  Bet it's lowering Consortium profits, too.  Have you done anything to address this issue?"

I paused for a moment and fanned my face with a paw.  "Why it feels like it's a hundred degrees in your office, I couldn't tell you, although truth be told, as these temperatures are melting all the soft cheeses, it might be the reason no one wants to buy any of it.  You ever think about diversifying and trying to sell some different types of cheese?"

"I don't feel the heat at all," The Big Cheese sneered.  "This is normal for this time of year.  It's always warm in summer.  NOTHING to do with any kind of warming trend.  The globe is not warming at all.  In fact, I forbid you to even talk about such things!"

I rolled my eyes.  "You're in some kind of state of denial," I told him.  "If it wasn't so hot in here, you wouldn't be chilling your soft cheeses like that," and I pointed to the little refrigerator, still chugging away, trying its might to spew out cold air.

"Don't know what you're talking about, Cat," and The Big Cheese wiped a stream of melted cheese from his mouth.  "Like I said, there's nothing wrong with the temperature in this room.  Nothing wrong with Consortium profits, either.  In fact, I'm predicting we'll have a surplus of profits by year-end."

"A surplus of profits?" I questioned.  "That doesn't sound quite right, Mr. Cheese."

There was a commotion in the hall and I looked outside.  Several little mice wearing ragtag clothing wandered past, carrying slips of pink paper in their paws.

The Big Cheese motioned to the little grey mouse who had summoned me.  "Close that door," he ordered.

I glared at The Big Cheese.  "Who were those mice?" I demanded.  "Clearly, there are mice in Mouseland who can barely afford to clothe themselves.  And they looked so thin.  They work - or worked - for the Canadian Cheese Consortium but they look like they don't have even enough cheese to eat, themselves."

"Then let them eat cake.  CHEESECAKE!" The Big Cheese cried with a flourish, before stuffing another paw full of soft cheese into his mouth.

I stared at The Big Cheese in disbelief.  There was simply no way to reason with the mouse. Whether he was truly oblivious to the facts before him or simply refusing to admit things were not going as planned, he was determined to ignore the state of affairs the Canadian Cheese Consortium was in.  I turned to the little grey mouse who had summoned me.  "There's nothing I can do with him," I declared.

"But Mr. Cat, we need you to reason with him," the little mouse said in a low voice.  "Get him to address the issues at paw instead of pretending all is well in the Canadian Cheese Consortium.  The mice of Mouseland are counting on you." 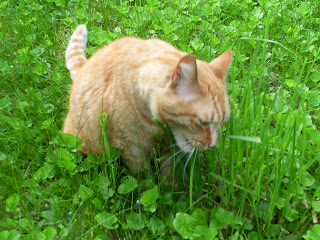 Then all of a sudden, I felt myself being lifted up.  The air around me cooled and the smell of melting cheese and mouse breath disappeared.  "I'm heading up to bed, Seville," I heard Peep #1 say. "And I'm turning off the fan down here so why don't you come upstairs, too."

"Were you dreaming about chasing cute little mice through fields?" the peep asked me with a smile.

Posted by Seville at Nerissa's Life at 20:26