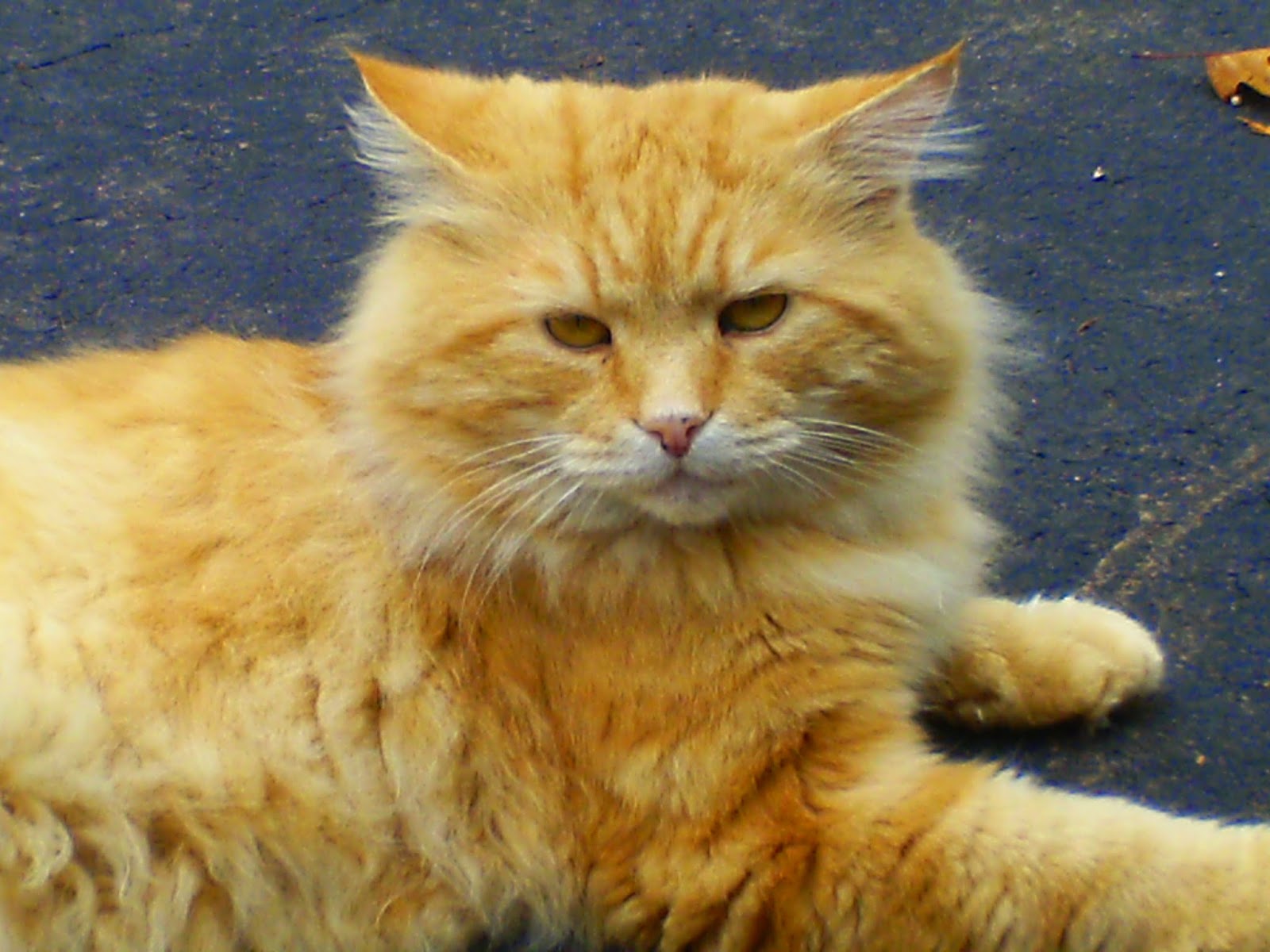 It had snowed overnight. Not a lot.  Just a dusting, really, but the piercingly cold wind had blown snow under the spruce tree where he had taken shelter, covering him in the icy white particles. People talked about snow being like a blanket. A blanket of snow might protect some things but for a cat, it was simply cold. Anderson shivered, pulling himself up into a tight ball, tucking his nose into his chest for warmth.

Oh how he longed for the days of his kittenhood when he had had a warm home and a family who loved him.  There had been comfortable places to sleep at night and always plenty of food to eat. He had been happy.

But then one day long, long ago, it had all come to an end.  He was put in a carrier and then into the car.  Eventually the car had stopped.  He was removed from the carrier and dumped on the side of the road, left to watch his people driving away.  He didn't know why they were leaving him behind but was positive it was some sort of mistake.  It had to be.  He patiently waited for them to return. He had waited all day and into the night but never saw them again.  They had forgotten all about him, sitting there, by the side of the road.

Andy's stomach growled with hunger.  When had he eaten last?  Yesterday?  No, it was the day before or perhaps even the day before that.  It had been too long.  He needed to find something to eat.

Emerging from under the spruce tree, Anderson discovered a clear, blue sky.  The sun shone brightly although its warming rays couldn't overcome the cold, icy wind.  The snow that had fallen overnight was light and easily picked up by that wind.  Snowflakes smacked him in the face.  They hurt.  He needed to find some shelter but first, he needed food.

He gave himself a good shake and started walking toward the house.  The house...  It wasn't his house.  It belonged to several other cats and, from what he had been able to observe, two people. The cats were okay, he thought.  They didn't chase him or pick fights.  Most of the time they simply ignored him.

As for the people, he avoided them at all costs.  People were dangerous.  He had learned that early on, in his life on his own.  People would yell at you to chase you away.  If yelling didn't work, they might hit or even kick you.  People were not only dangerous but they were cruel, too.

Anderson still remembered the day he had been hit with a broom.  He would never forget it.  He couldn't forget it.  It had hurt so terribly.

He had only been trying to get a little something to eat.  He was only trying to survive.  He hadn't meant to do any harm.  The food was in the garbage.  It had been thrown out.  He hadn't thought anyone would mind his rummaging through a garbage bin and the aroma of something edible had been so enticing.  How could a person begrudge a starving a cat a morsel or two of food?  The only thing that made sense was that people were mean.  Mean and dangerous.  He knew he must remember that, always and from that day on, he did.

After being hit he had run far, far away.  So far he could never find his way back again even if he were to try.  He was on his own now.  All alone, living off the land as best as he could do.

He thought about the house.  The people living there had never hurt him but he wasn't prepared to take any chances.  He kept his distance as much as possible but sometimes he simply had to venture closer.  Today was a day he would need to do exactly that.

His tummy growled again, reminding him to pick up his pace.  He knew that if the people living in the house saw him, they would put out food.  They had done so before and he was sure they would do so again.  Once in the driveway, he sat down.  The wind was strong and icy cold, forcing him to turn so that his left side was shielded from it.  Earlier that winter, he had lost all the fur on that side.  The mats had become so tangled that with the longer days brought by late January and February, he had begun to shed and the mats of fur had simply peeled off, exposing bare skin to the bitter weather.  Out of the wind it was still cold but didn't hurt quite so much.

He heard the unmistakable sound of a door opening and closing.  He froze in terror, not daring to move even a whisker.  Did that sound mean that someone was bringing him something to eat or did it mean danger?

Waiting another minute or two to make sure that the person was gone, Anderson gingerly walked up the path leading to the house.  There was no one there but on the veranda were three bowls of food. Soft food, dry and even a bowl of water.  He dashed towards the bowls and ate voraciously.  As soon as he was done, he slowly backed away, disappearing around the corner.

At the back of the house was a deck.  Most of it was covered in snow but there were patches of bare wood, here and there.  And with the sun shining down upon it, he knew it would be warm.  The cold wind didn't seem to bother one when on that deck.  He headed for it and squeezing through two wooden planks, he settled down in the sunshine, allowing it to warm his fur.  The warmth felt heavenly.

Over time, the days became longer and more importantly, warmer.  The fur on his side began to grow back and his tummy no longer ached from hunger.  Anderson learned that the people living in the house would give him food whenever he appeared and not once did they do anything to harm him.  He was sure that at least one of them was eager to befriend him but he was having nothing to do with that.  He fully intended to keep a safe distance at all times.

Eventually he found that he could venture as close as the path while waiting for the people to deliver his meals.  He didn't even have to run away when they appeared.  They seemed to know better than to try to approach him.  And by mid-summer he found that not only could he speak to the people from the house, but they appeared to quite enjoy hearing him do so.  They would even speak back although truth be told, it all sounded like gibberish to him.

By late summer, the days had begun to get shorter and the nights, although not cold, were definitely chilly.  Anderson was reminded of the cold and icy winter he had lived through only a few months before.  He knew it would return again.  The thought made him shiver.

He was now venturing right onto the veranda when the people came out of the house to give him his food.  A couple of times he had accidentally touched their hands with his nose when they took too long to spoon the food into the bowl.  Of course, whenever that happened, he would immediately hiss at them, reminding them that he was still in control of the situation and that they shouldn't read too much into it.  They didn't appear to mind the occasional hiss.  Once or twice, he thought he even detected a hint of a smile from the person he now knew to be the first peep.

Then one day in late September, it happened.  Anderson had come around to the back door in the early evening.  The sun was beginning to set and the air was quite cool.  Peep #1 was standing by the door, speaking to him and encouraging him to approach.  He did.  He placed one paw in front of the other.  Then a few more steps were made.  Before he knew it, Andy was inside a small room at the back of the house. 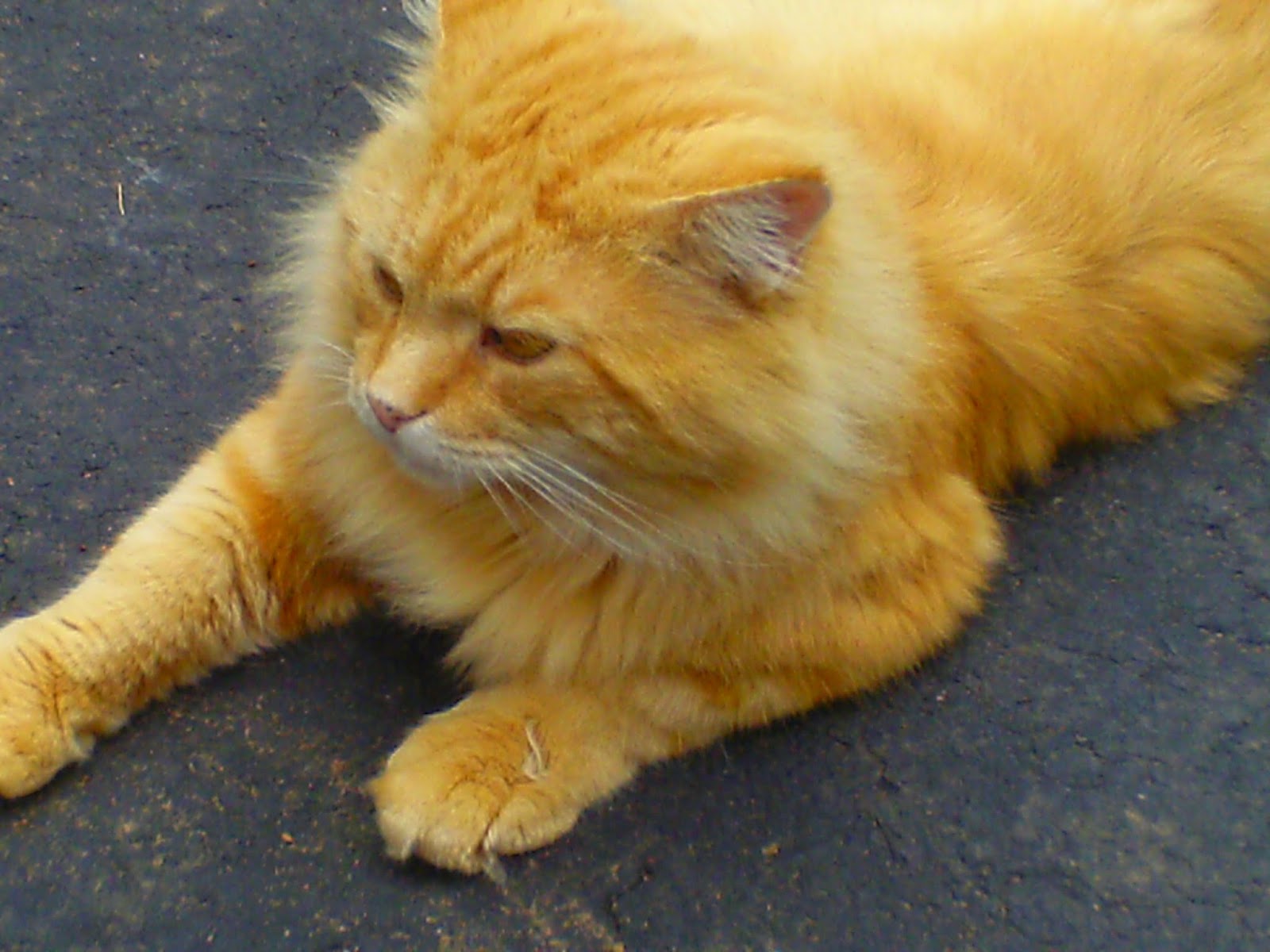 Never before had he seen a person move so quickly but that back door was shut in a flash.  Anderson was trapped. He raced through the house and with desperation, headed up a flight of stairs.  He found no means of escape up there but instead, found something else.  Something much better.  He found a room with a soft bed upon which to sleep in comfort and warmth. It reminded him of his life as a kitten when he had enjoyed the love of a family.  Where his tummy always had food and where he never went hungry. He found...  a home.

Posted by Seville at Nerissa's Life at 16:08