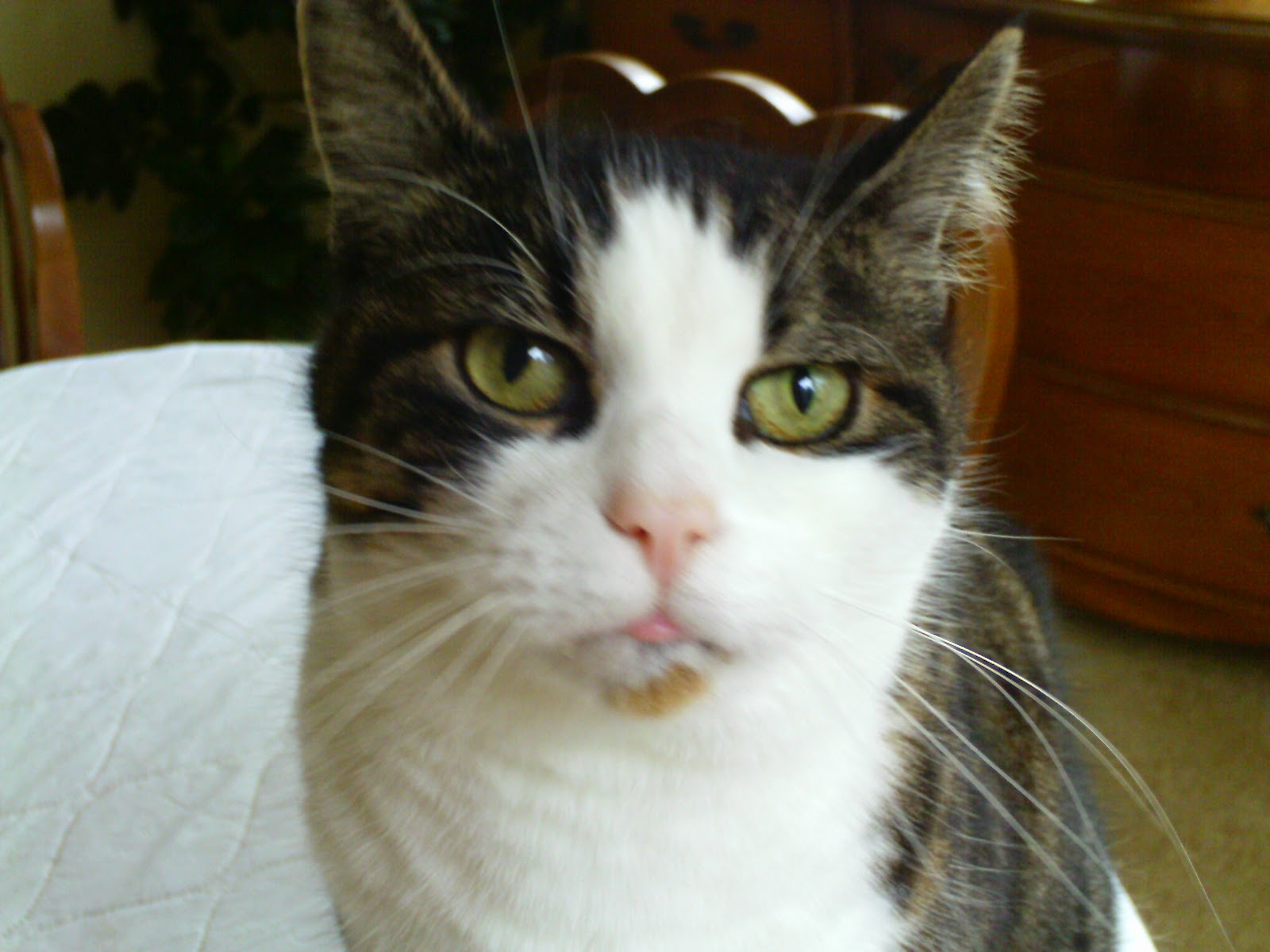 So I was listenin' to the news the other day when all of a sudden, what was bein' reported sunk in and I said to myself - and anyone else in the room who happened to be listening - MOUSES!  I had best get crackin' on workin' on that.

Sometimes I just kinda listen to the news. Sometimes I don't really pay it a whole lot of attention but instead, just keep an ear out for anythin' related to the really important stuff. You know, like nip.  Not a lot of nip news though, I'm afraid.  MOUSES!

And of course I'm always listenin' for news regardin' the Senate, too.  I still intend on becoming Canada's first feline Senator so I've always got my other ear out, listenin' for Senate updates.

It's a good thing I have two ears, for sure.

But the other day, even though the newspeeps weren't talkin' about nip or the Senate, I listened in anyway.  Sometimes I do that.  Sometimes I'm truly interested in what they're reportin' and other times, I'm just lookin' for fodder for my blog.

Not quite sure why I was listenin' in on this particular report 'bout submarines but, knowin' how my mind sometimes works, I'm thinkin' that all the submarine talk reminded me of submarine sandwiches which would be good for snackin' if my peeps weren't veggies but nevertheless are still shaped like cigars which some peeps out there smoke just like some peeps - NOT mine - smoke marijuana that gives 'em a high like catnip does for me and so you see, the whole news report obviously reminded me 'bout nip so clearly, I had to listen in.

Anywho...  Turned out the newspeeps were talkin' about submarines and not nip.  MOUSES!

But I'm glad I paid attention anyway 'cause it was pretty important stuff.

Way back in 1998, the then Government of Canada bought four Victoria-class submarines for the bargain price of under a billion dollars from the United Kingdom.  Now for the first time in seventeen years, three of those four subs are in workin' order - all at the SAME time - and available for operations.  Makes you wonder if there should be lemon laws for subs, huh?  Again I must say, MOUSES!

But 'nough about that.  The important thing to remember in all this is that I have a fleet of flyin' fryin' pans to consider.

As you all know, my brother Seville and I are the world's leading experts in eggbeater-whisk time travellin'-teleportation technology.  The eggbeaters and whisks power the technology.  The actual vehicle is a fryin' pan.

Truth be told, eggbeater technology will power any vehicle but the bigger and heavier said vehicle is, the more eggbeaters that you require and eggbeaters don't come cheap.  Believe me, I know.

That's why Seville and I like to use our trusty ol' fryin' pan.  Only one eggbeater is required.

But all this talk on the news 'bout Canada havin' bought second-hand citrus fruit - sorry, I mean submarines - got me to thinkin'.   What would Seville and I do if somethin' bad happened to our fryin' pan?  What if it rusted or somethin'?  Gosh, we couldn't have that.  We needed to have a replacement on order, for sure.  MOUSES!

Actually, Seville and I really should have a whole fleet of fryin' pans at our disposal.  If not a fleet, at least one backup or maybe two.

So I began my on-line search for fryin' pans.  There were so many options.  Did I want to order 'em up for construction or buy somethin' already built.

I came across a couple slimy sales pitches but mosied right on by.  Fryin' pans only used by little old ladies to fry up Sunday brunches after church.  How stupid did they think I was?  I wasn't fallin' for that.

No, I knew I didn't want anythin' used.  There would be no second-hand fryin' pans for me.  Seville once bought refurbished eggbeaters from the Weasel Syndicate and they proved to be nothin' but trouble, for sure.  So I decided to avoid any fryin' pan sources affiliated with the Weasel Syndicate along with all those that made mention of bargain basements, lemonade stands and refurbishment. Seemed like a wise precaution considerin' all things submarine, if you know what I mean.  Of course you do.

There were definitely some deals that sounded way too good to be true.  You can't buy a fryin' pan for pennies.  Even I know that.  Gosh, we don't even have pennies here in Canada any more. MOUSES!

Finally, I decided upon a nice enamel version.  New technology but not so new it was untried. Scratch resistant which is very important considerin' Seville and I have claws.  Rust resistant and even leak proof, too.  Brand new.  Reasonably priced but not so cheap as to be suspicious. Everythin' in workin' order...  GUARANTEED.  Plus, the seller was the manufacturer and not some guys tryin' to pawn off somethin' they themselves no longer wanted 'cause, you know, it was broken or somethin' like that.

A few clicks later and I had my new fleet of flyin' fryin' pans on order.  Both of 'em should be arrivin' any day now.  Once Seville and I install the eggbeaters and whisks, they'll be up and runnin' in no time at all.  SWEET.

And speakin' of sweet things, remind me to tell Peep #1 she needs to buy some sugar this week.  When browsin' for fryin' pans, I found a source for lemons, really cheap.  I ordered her up a case or two.  As a cat, I don't care for lemons but I know that the peeps do.  I figured they might enjoy makin' some lemonade.

And I'm assumin' there are lemon laws for lemons.  But what if there aren't? Nah, that would be silly.  You buy lemons from a lemon salesman, you should definitely be guaranteed to get lemons but if they turn out to be grapefruit or limes, I'll be askin' for my money back, for sure.  MOUSES!

Posted by Seville at Nerissa's Life at 14:11