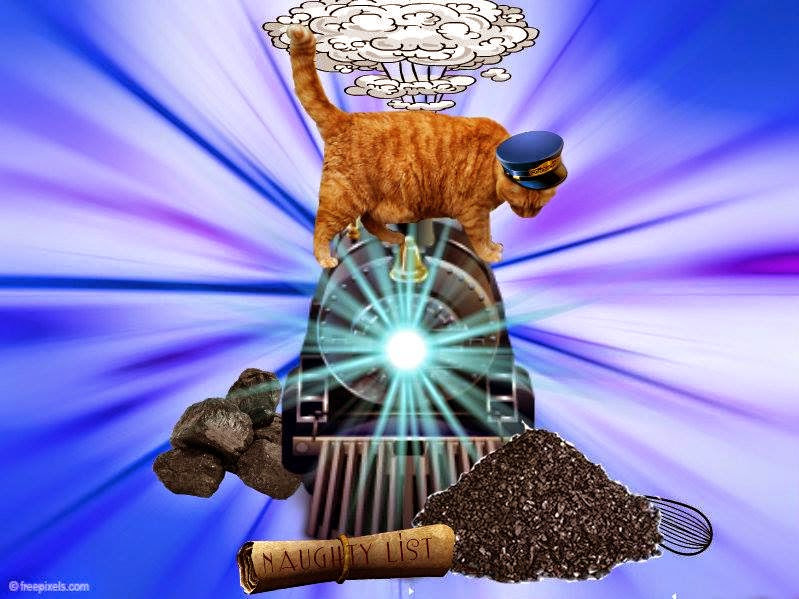 Thinking he heard an odd sound, Nissy stopped typing.  Silence.  "Nothin' there," and he shook his head.  "Must be hearin' things or somethin'."  He went back to work on his blog post but moments later, there was another sound.  Twitching his ears back as far as they would go, Niss hit save on the computer.  "I had best go check that out," and he padded toward the basement door. Creeping down the stairs, Nerissa peered around the corner.

"ALL ABOARD!" someone cried.

Nerissa stared hard at his brother before pointing to a whisk lying on the floor.  "Oh yeah?  Then where did that whisk come from, huh?  You gonna deny..."

"But that's not mine!"  Seville held up two whisks, one in each paw.  "See?  I admit that I was tinkering with the teleportation device, trying to increase the whisk eggbeater differential accleration ratio but I only had the two whisks.  That one there is a plant.  Someone is tryin' to frame me.  I swear!"

At that very moment, an elf hopped down from the train.  "Did someone say time vortex?  As in time travel?  Tsk, tsk, tsk...  Well that certainly explains how I made such good time getting here. But it doesn't explain why I ended up here.  Here in this...  basement," the elf sneered.

"Nothin' wrong with our basement," and Nerissa glared at the elf.  "Exactly who are you and how did you end up in my basement?" 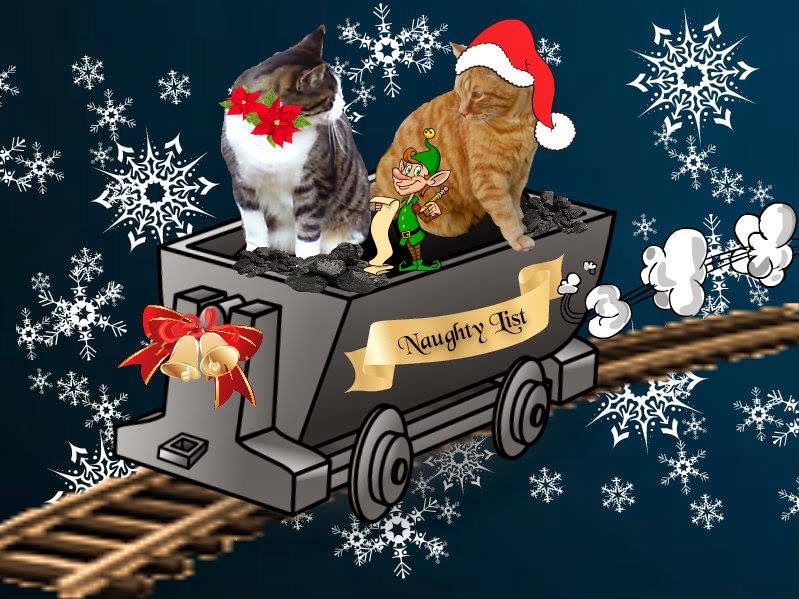 "Colton , Sir.  At your service," and the elf stood at attention.  "I'm in charge of acquiring the coal Santa needs to fill the stockings for the children on his Naughty List, each year."  He slumped down onto the floor.  "I don't know what happened.  I negotiated a contract with a new mine and had no problems getting the needed coal but this map to get me home proved useless. Instead of taking me back to the North Pole it led me...  HERE!" and he flung his arms and the map up into the air.

Nerissa snatched the map off the floor and immediately noticed sticky paw prints all over it.  "From whom exactly did you purchase this map, Colton?"

"The Weasel Syndicate, of course," Colton snapped.  "Everyone knows they're the go-to guys when you need something in a hurry."

"That's true, Niss," piped up Seville.  "During the world-wide eggbeater shortage a while back, the only place I could get eggbeaters for our eggbeater-whisk time travelling-teleportation technology was the Weasel Syndicate.  That's where I bought those refurbished egg..."  Seville slapped a paw to his mouth.  "I tried to return the eggbeaters when they all started falling apart but the weasels wouldn't give me a refund.  Apparently, all sales are final."

Nerissa looked at his brother.  "Okay, seems like you're not entirely to blame for this fiasco, Seville. Clearly this is some sort of retribution by the Weasel Syndicate."  He bent down to inspect a rolled up piece of paper on the floor.  Seeing that it was Santa's Naughty List, he added, "We need to do something 'bout this train, though.  If we're not careful, we'll end up on this list."

"You're probably already on it," smiled Colton.  "The list is magic.  Names appear and disappear, automatically.  Creating a situation where Santa's coal train was drawn into your basement and away from the North Pole sounds like reason for the Naughty List to add your names to its ranks."

"BUT I WAS FRAMED!" Seville cried.

"Naughty by association," Colton stated.  Unrolling the list he pointed to the bottom.  "I was right. There you are.  Nerissa the Cat and Seville.  Looks like you'll both be getting lumps of coal in your stockings this year."

"Awww...  MOUSES!"  Nerissa sat back on his haunches.  "But what if we were to help you find your way back to the North Pole?  Do you think that would get us off the list?"

Colton thought for a moment.  "It might.  Do you have an accurate map?"

"I have better than that," Nerissa grinned.  "I have a radioactive reindeer dust tracking compass!  Be right back."

Moments later, Nissy returned carrying his compass.  "I use this to track all reindeer activity in Nova Scotian airspace each December but I think I can use it to track our path back to the North Pole."  He peered into the tunnel.  "Yup, just as I thought.  The confined space of the tunnel is magnifying the effect of the dust's radioactivity.  It's like a beacon pointing to the North Pole.  When we encounter diverging tunnels, the compass will tell us which one to take."

"I'll take that," and Colton grabbed at the compass but Nissy drew back his paw.

"No way, Colton.  I'm not lettin' this out of my sight.  Seville and I are coming with you.  I wanna make sure our names disappear from that list." 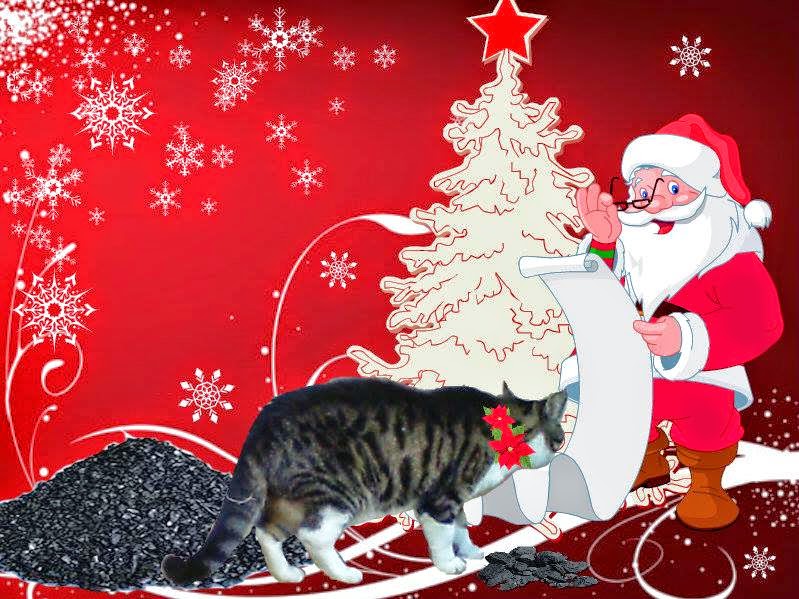 The two cats and the elf began their long journey to the North Pole. Nerissa and Seville kept themselves entertained by singing Christmas carols while Colton recited the names on the Naughty List.

Seville leaned over and whispered in Nissy's ear, "I think the elf thinks he's one of those actors who can recite the telephone directory and sound interesting."

"A phone book would be far more interestin', I should think," was Nissy's reply.

After what seemed like days but was really about forty-five minutes, the three finally arrived at the North Pole.  "And I suppose you'll be wanting to meet with Santa, yourself?" Colton asked Nissy.

"Of course.  Gotta make sure my brother and I are off that Naughty List and back onto the Nice one."

"Why of course you're on the Nice List, Nerissa.  You came all the way here to the North Pole just to find that out?  Whatever made you think you wouldn't be?" Santa asked.

"Well 'cause of...  Um...  Never mind, Santa.  Not important, really."  Nerissa pressed his lips together, hoping he hadn't given Santa any ideas.

Turning to leave, Nerissa stopped in his tracks.  "Santa?" he asked.

"Uh, I don't know how to get home.  I don't think Seville and I can get back to Nova Scotia usin' the same way we got here.  You have any eggbeater teleportation devices handy?"

"HO! HO!! HO!!!" Santa laughed.  "We don't use eggbeater teleportation technology up here at the North Pole, little one."  Smiling, he bent down to scratch behind Nissy's ear.  "But I'll tell you what I can do.  I can loan you and your brother a reindeer and sleigh to take you home.  You'll be back with your peeps in the twitch of a whisker."

"That would be great, Santa!" and Nerissa began to purr.  "We'd appreciate that a whole lot.  THANK YOU!" 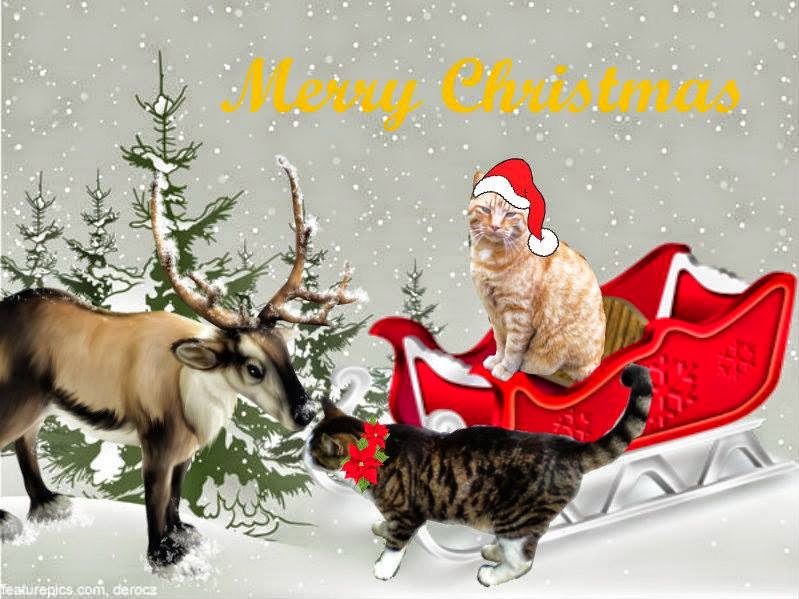 "Nerissa, you and your brother might want to brush some of that Naughty List coal dust off your fur before you return home.  I can't imagine your Peep #1 will want you tracking that into the house."

"Yes Sir.  Santa...  Sir.... Uh...  Yup, I'll get right on that." and Nissy hurried off to find the waiting reindeer and sleigh, wondering exactly how much of his recent activities Santa knew.

"MOUSES!" Nissy whispered aloud to himself.  "I wonder if Santa knows 'bout my radioactive reindeer dust tracking compass.  I wonder if I'm even allowed to have such a thing.  Hmmm.... Best not to mention it to anyone.  Bad enough that that elf already knows."

And as Nerissa and Seville's borrowed sleigh took flight, Nissy was sure he heard a joyous cry of...

MERRY CHRISTMAS TO ALL
AND TO ALL A GOOD NIGHT!

Posted by Seville at Nerissa's Life at 03:17