One of the best rooms in my house for nappin' is the family room.  Lots of prime-time nappin' real estate in that room. A couple of chairs, window sills and a cat bed, to name a few.  Sometimes even a box.  And I mustn't forget the shelf under the television although lately, Rushton has claimed that to be his and only his.  He thinks we're all succumbing to his demands and leavin' it for him but truth be told, we all simply found better spots.


My favourite spot of all is on the chesterfield.  That's where the peeps sit while watchin' television and if you can get in there while one is present, tummy rubs and chin scritches are bound to follow.

So there I was the other day, curled up next to Peep #1 and driftin' off to sleep with a Canadian news channel dronin' on in the background.  Some politician was bein' interviewed and the interview was lullin' me to sleep.  The peep was tickling me behind the ears.  All was well in my little part of the world.

But I awoke with a start when I heard noises comin' from the front door.  There was a crash and a boom and, I think, if I'm not mistaken, the splinterin' of wood.  I sat there, paralysed with fear. Someone was breakin' into my house!

I glanced over at the television thinkin' that maybe, just maybe, the noises were emanatin' from there but the television was off.  It was dark.  The peeps were gone.  It appeared to be the middle of the night.

Lookin' around the family room, I saw my brother Anderson on the coffee table, Auntie Primrose in the cat bed and my sister Mason on the back of a chair.  They had all been awakened by the noises, too, eyes wide and ears alert.  Even Rushton was lookin' out from his spot on the shelf under the television.

Primrose was up in a flash.  Bein' a bit of an enforcer, she was prepared to go meet the intruders head on and...  well...  enforce.  That's kind of what she does.

Little does my new brother Andy know that Auntie Primrose has been known - more than once - to put the fear of God into a doctor and room full of nurses and vet techs but whatever.

There were still noises comin' from the front of the house.  Whatever was goin' on could not be good.  And we cats were sittin' ducks in the family room.  Short one or two quacks but still, sittin' ducks, nonetheless.  There was only one way out and that way led in the direction of the noises.

Rushton emerged from his shelf under the television, floofin' his tail like only a long-haired cat weighin' in at over seventeen pounds can do.  "Protect the women and kittens first!" he cried. 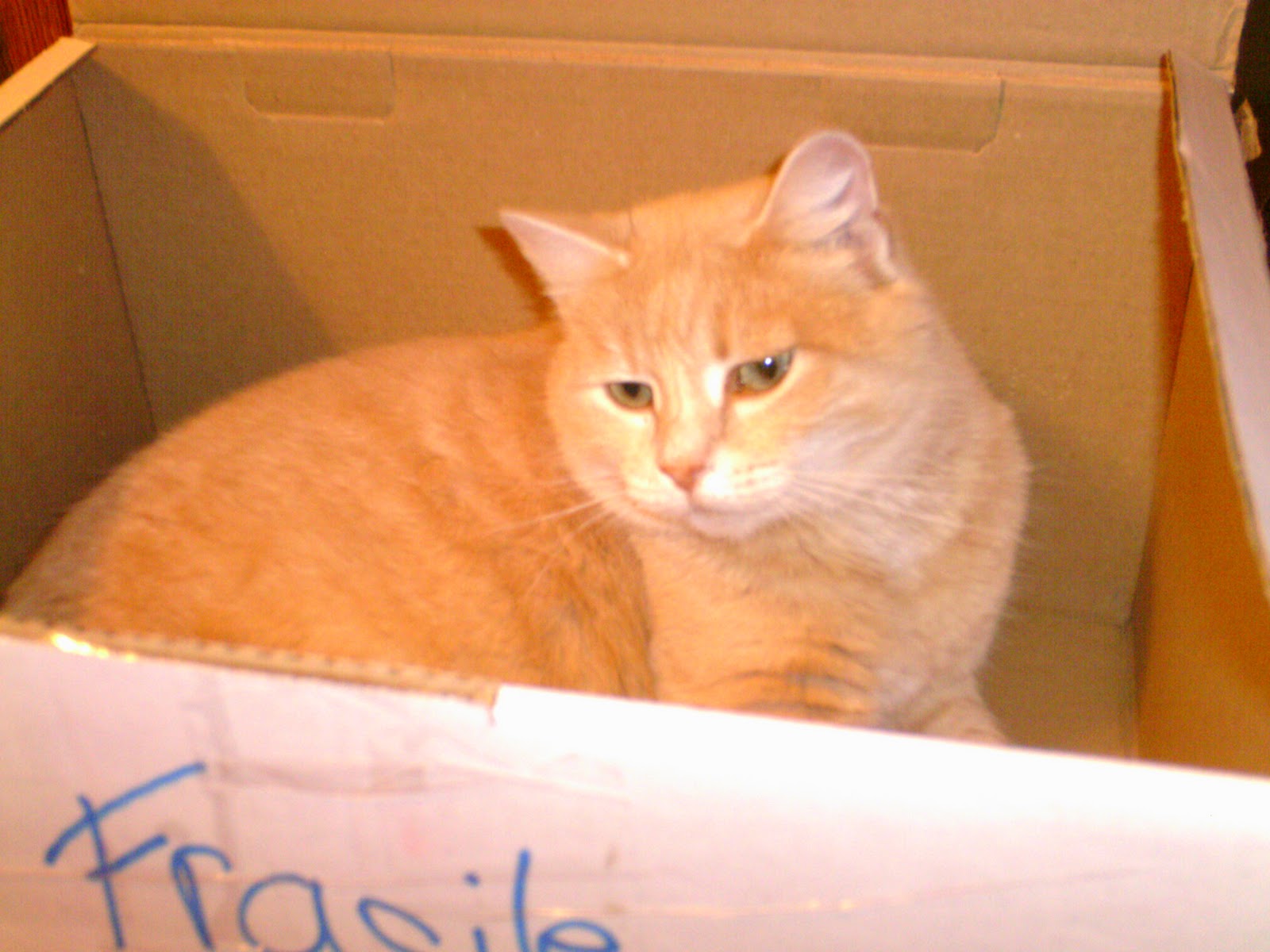 I glanced around.  No kittens in sight. As far as the women went, like I said before, Auntie Prim requires very little protectin'.  My sister, Mason, must have been thinkin' along the same lines 'cause she was flashin' her claws, one by one.  Like in a cartoon on television, they glistened in the moonlight.

Anderson was lookin' around the room, tryin' to find somethin' - anythin' - that could be fashioned into a weapon.  His gaze drifted over to the fireplace poker. Now there was a weapon. Unfortunately it proved far too heavy for a cat to manoeuvre.

Mason grabbed a wand toy and started issuing orders.  "Nissy, untie that mouse and string from this stick," she demanded.  She, herself, began to whittle away at the stick with her claws.  She was makin' a spear."

Watching my sister with her whittling and two of my marmalade brothers staggering under the weight of the fireplace poker, I saw the futility at paw.  I said it once before and I'll say it again, we were sittin' in ducks in that room.  Somethin' had to be done.

I immediately dove under the chesterfield and hid.

I would have hidden in a closet or somethin' but the family room has no closets.  Under the couch seemed like the next best thing.  No one would ever find me there.

Primrose lifted the skirt of the couch.  "Get out from under there right now," she spat.

"No can do," I replied.  "If anythin' were to happen to me, what would happen to my blog?  Who would take over?  Who would write Nerissa's Life?  I must save myself at all costs."

From the other side of the room I heard Mason muttering.  "Any one of us could write that blog if we were ever allowed in your office."

"Not so, my fur-fam, I whispered back.  "I'm the only cat in the house who knows how to turn on the computer.  One must master that before one blogs."

Next thing I knew, my brother Seville was pokin' his face under the chesterfield.  I squinted from the light streaming in.  Clearly the intruders had entered the family room and turned on the overhead lights.  I buried my head in my paws."

"Whatcha doing under there, Niss?  You hiding from someone?" Seville asked.

Then the rest of my fur-fam appeared.  They begged and pleaded for me to come out of hiding, claiming everything was now safe.  I let out a loud cry for the peep.  "Peepers!" I howled.

I awoke with a start. I opened one eye.  Then opened the other.  I was no longer under the chesterfield but rather, curled up on top of it.  It was late afternoon and not the middle of the night.

Seville's nose was mere inches away from mine.  "Peep #1 has set up the Christmas tree in the living room.  I think they're going to start decorating it.  Come on Niss, there are boxes of rollable breakables all over the place!"

My ears perked up at the thought of rollable breakables, I must admit.

Stretchin' out a paw, I let out a big yawn.  I looked around.  Anderson was snoozing on the coffee table, Primrose was curled up in the cat bed and Rushy was on the shelf under the television. Mason was lying rather precariously on the back of a chair, snoring.  At any moment, she would most likely fall off it...  again. 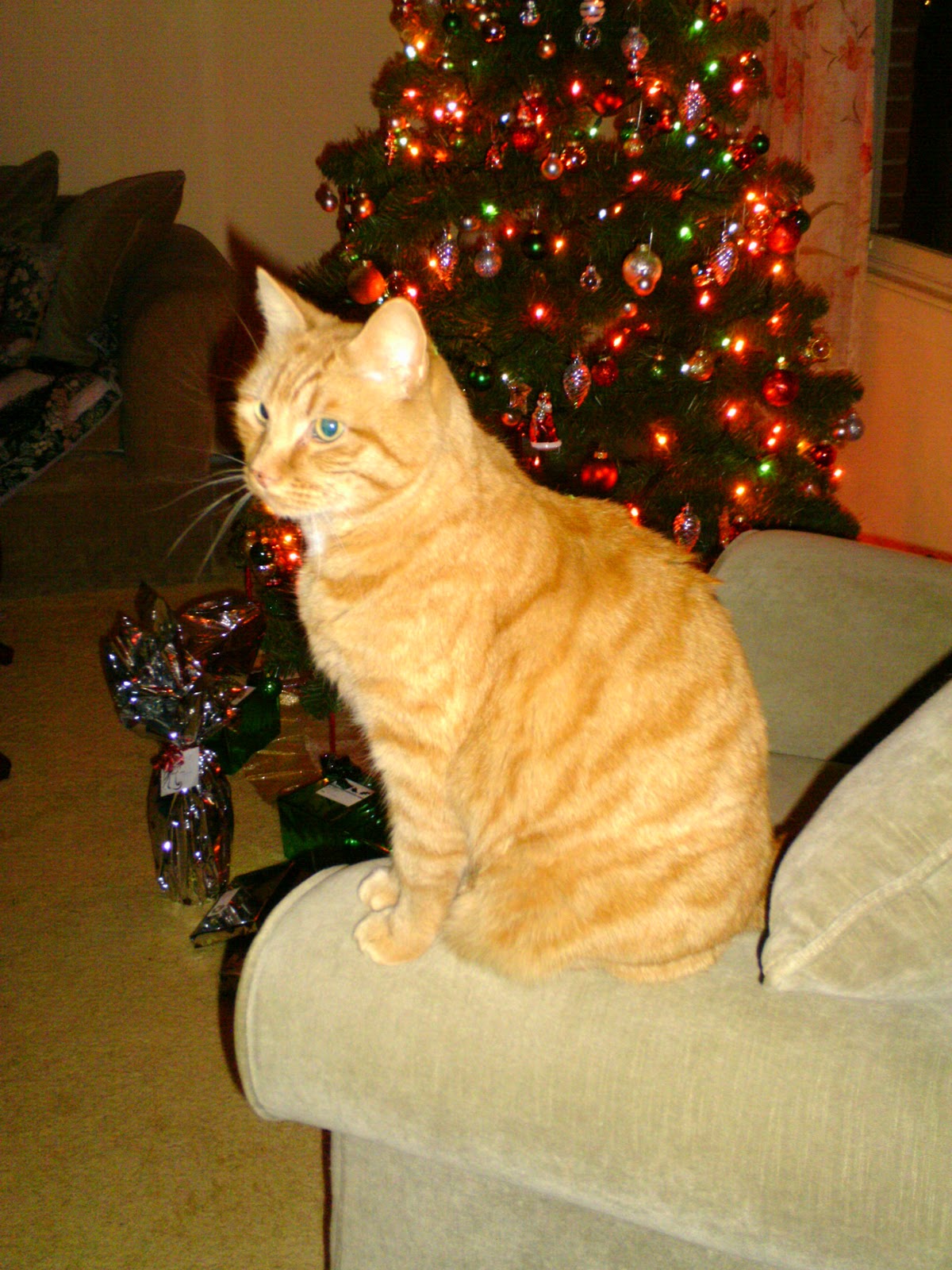 Clearly, everythin' was okay.  Everything was as it should be.  No one had been breakin' into my house. It had all been a big ol' nasty dream.  A dream likely triggered by fallin' asleep while listening to the news. And the noises I heard had likely been made by the peep bringin' the Christmas tree downstairs and settin' it up.  It all seemed perfectly reasonable.

And of course it had been a dream.  I, Nerissa the Cat, would never behave in such a manner.  Hidin' under the chesterfield when others' lives were at stake...  NEVER.  I couldn't even fathom myself behavin' like that.

When it comes to my fur-fam, I'm a leader.  A true leader.  And true leaders think of others before thinkin' of themselves.  And they never ask of others what they, themselves, would not be willin' to do. That's how leaders behave.  I should know 'cause you know...  I'm a cat and cats are smart.  We cats know 'bout stuff like that.  MOUSES!