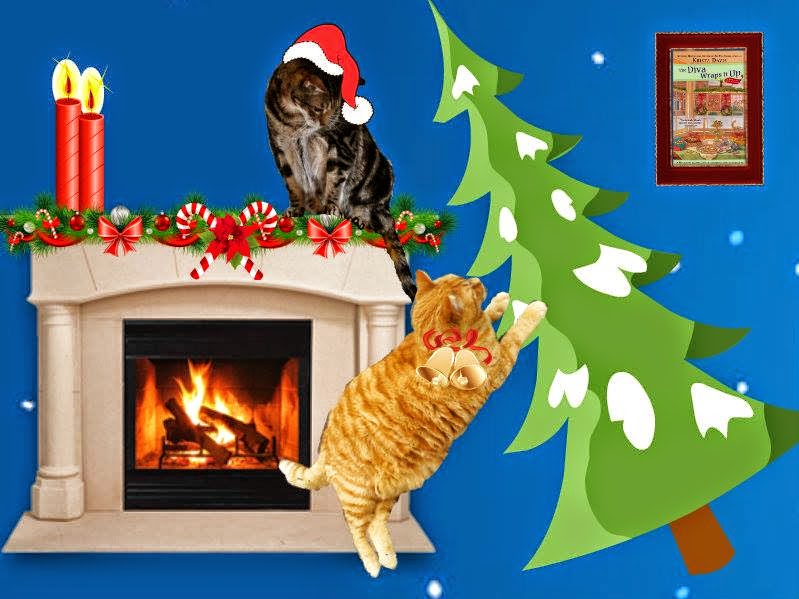 Having added the finishing touches to his book report on The Diva Wraps it Up by Krista Davis for his Kitty Lit. 101 course, Nissy hit print on the computer. The printer came to life, spitting out pages, when a loud crash was heard from the family room. "What the mouses is that?" Nissy cried.

What he found was quite a sight.  There was his brother, Seville, dragging a large evergreen tree into the room.  In his wake lay a chair and lamp on the floor and a kitty condo, leaning up against the wall.  Oblivious to the damage he had caused, Seville padded around to the other end of the tree and began to push.

"Hey Niss, help me with this tree, would you?"

"What on earth are you doin', Sivvers?" asked Nissy.  "The Christmas tree goes in the livin' room.  Plus, that's not our tree.  Ours is artificial."

"Yeah well the peeps haven't put the tree up yet and Christmas is just a week away.  They're late.  I got all inspired to decorate after reading our latest assignment for Professor Lyon's class, The Diva Wraps it Up.  Sophie was all into the decorating and it made me realise what a slacker Peep #1 is regarding that aspect of Christmas."

Nerissa nodded in agreement.  He had to admit, his brother did have a point.  Padding over to the tree he began to help push it into place.  "You try to push it upright, Seville.  I'll pull from the other side," and Nissy circled the tree. 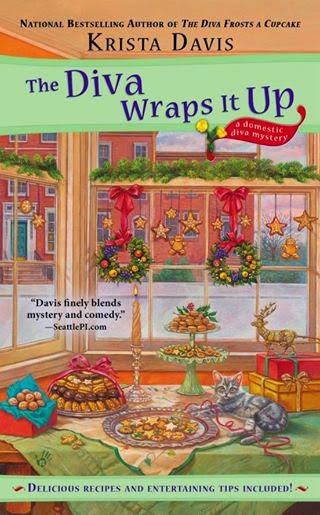 "Hey there Mochie," and Nissy waved hello.  Suddenly stopping in his tracks, he turned, slowly, towards the fireplace.  There, sitting on the mantel and looking down at Seville as he tried to prop up the tree, was Krista Davis' cat, Mochie.  Mochie was the real-life inspiration for the cat, Mochie, in The Diva Wraps it Up.  Nissy stared up at him in disbelief.  "MOUSES!"

"Nissy, meet Mochie," began Seville.  "Mochie, this is my brother, Nerissa the Cat."

"I arranged for an early morning teleport," Seville explained. "Mochie arrived about an hour ago.  He's here to help us decorate the family room for Christmas."

Mochie gazed down at Nerissa.  "Seville explained how you didn't have any decorations up yet except for a measly little wreath in the front hall.  He clearly needed my help.  How could I refuse?"

"He has already helped dress up the mantle, Niss," and Seville pointed to where Mochie was sitting. "I'm loving the garland he used.  Isn't it festive?"

Nerissa sat back on his haunches to think about the situation.  They did need help.  His own peeps had proven useless and Mochie's mum was obviously a whizz with decorating and creating Christmas spirit.  That had been been evident in her book.

"I must admit," began Nerissa, "your mum's descriptions of Old Town, Alexandria were magical. Really, really magical.  Readin' her book was like explorin' a winter fairyland.  The Christmas activities, the old shops and houses all decorated so nicely..  She created the perfect setting for a Christmas mystery.  Mochie, if you know half the stuff your mum knows 'bout decoratin', you'll be a great help to us, for sure."

Mochie hopped down from the mantle.  "We should start by getting this snow off the tree.  Real snow and indoor lights are not a good combination."

Nissy nodded in agreement.  "Yup, you could get a shock like Luis did, huh?  Of course, he wasn't workin' with indoor lights at the time but still...   One must be careful when workin' with electricity."

Seville got to work brushing the snow off the tree while Nerissa and Mochie began to sort through the the boxes of ornaments.  "We have lots of breakable rollables at your disposable, Mochie.  You have a colour particular colour scheme in mind?  I noticed that the main character in the book, Sophie, paid a lot of attention to colour schemes."

"MOUSES!" Nissy cried, slapping a paw over his mouth with embarrassment.  "Sorry 'bout that. The main character of The Diva Wraps it Up is obviously your character, Mochie.  Sophie would be the second main character."

Mochie brushed off the slight.  "Don't worry, Nerissa.  My character doesn't have much dialogue in the book so it's an easy mistake to make."

"Actually, your character doesn't have any dialogue," piped up Seville. 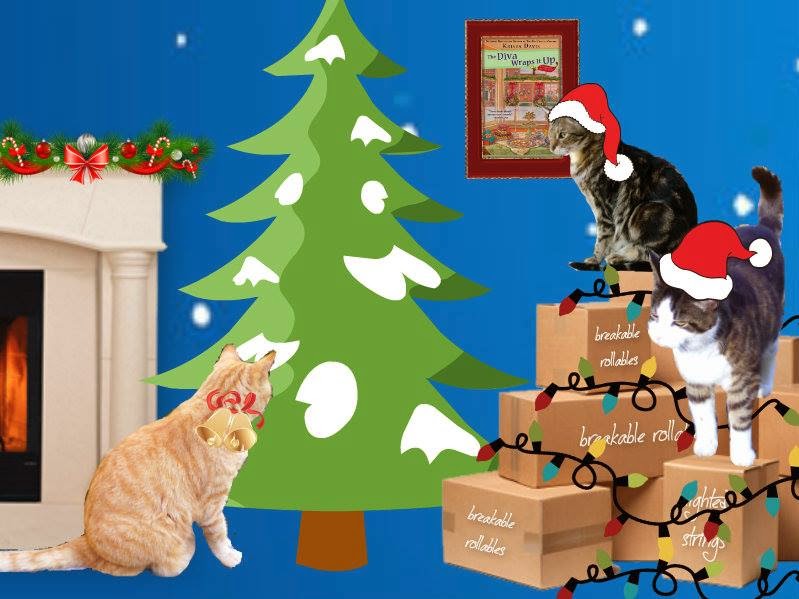 Nerissa and Mochie glared at Seville. "Yeah, but Mochie's character helps set the mood, Sivvers," Nissy explained. "Plus, he alerts Sophie to things that are goin' on.  Things like when someone is up and about in the middle of the night.  Things that Sophie needs to know in order to solve the murder. Very important stuff, that, pointin' out clues and whatnot to the human characters in the book.  It's 'cause cats are way better at sniffin' out clues than peeps are."

"I'm thinking we'll go with the classic red and green, just as Sophie did when decorating her house."

"Whew!" and Nissy breathed a sigh of relief.  "Glad to hear we're not goin' with the pink and orange scheme some of the characters used."

"You're just sayin' that 'cause you're a marmalade cat, bro."

Narrowing his eyes, Seville muttered under his breath, "Orange is a good colour.  It's the best colour, ever."

"You two have a very interesting relationship," Mochie mused.

"And I loved the humour in some of those relationships!" Seville blurted out.  "Like the relationship between Liza and Luis.  That was great.  And I loved how Liza was scared to go into the basement in case there were rats.  Imagine being scared of a little old rat," he scoffed.

Nissy winked at Mochie while saying, "Bit of a red herring with those..."

"There were red fish?" interrupted Seville.  "I know there were a lot of very interesting discussions about food, cooking and recipes and stuff in the book but I don't recall anyone serving herring.  And I certainly would have remembered had the herring being served been red."

Nissy and Mochie sighed in unison.  Having finished draping the tree with strings of lights, they began to work on adding ornaments such as bows and Nissy's favourites, the much-loved breakable rollables.

"I didn't know who the killer was until the very end," murmured Nissy.  "There were so many twists and turns in the plot that every time I thought I had it figured out, I was proved wrong."

"Oh, I knew who the killer was right from the start," Seville stated.

Nerissa and Mochie looked at Seville in disbelief.  Nissy raised one, questioning eyebrow.

"Okay, FINE.  I didn't really," and Seville batted a glass ball across the family room floor.  "I thought I did but then I read further and realised I had it all wrong.  I was kept guessing right to the end just like you, Nissy.  The book really was a real whodunit from start to finish."

Placing one final breakable rollable on the tree, Mochie stepped back to inspect it.  "Well, I think that's a wrap!  Looks good, boys.  You like?"

"We love!" Seville and Nerissa cried in unison.  "Wow, it doesn't even look like the same tree," added Nissy.  "It's beautiful." 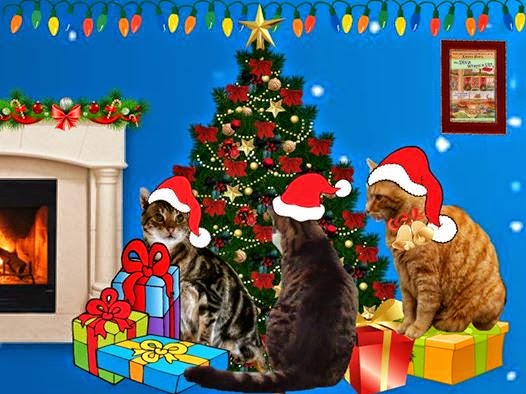 "That's all part of the magic of Christmas," Seville told his brother.  "It looks really good, Mochie.  Thanks so much for comin' up to Canada and helpin' us with the decorations."

"It was my pleasure," Mochie told the boys.  "I enjoyed meeting you both and who knows, maybe we can get together again?"

"That would be super nice, Mochie. You have time for some dinner before teleportin' back?" Nerissa asked. "Tuna sound good?  Or would you prefer salmon?"

"I'll get the nip beer," said Seville, heading into the kitchen.  "Dinner for three.  I'll put on some Christmas music and we can eat by the tree.  Make it a really festive occasion, celebrating our newly decorated family room, all thanks to our new friend, Mochie."

The Diva Wraps it Up is the eighth book in the Domestic Diva Mystery series written by New York Times best-selling author Krista Davis and published as a Berkley Prime Crime Mystery by the Berkley Publishing Group, a division of the Penguin Group.  Connect on-line with Krista on her website, Krista Davis, her Facebook page Krista Davis, Author or on Twitter at @kristadavis. The cover was used with Krista's permission.

Posted by Seville at Nerissa's Life at 15:02