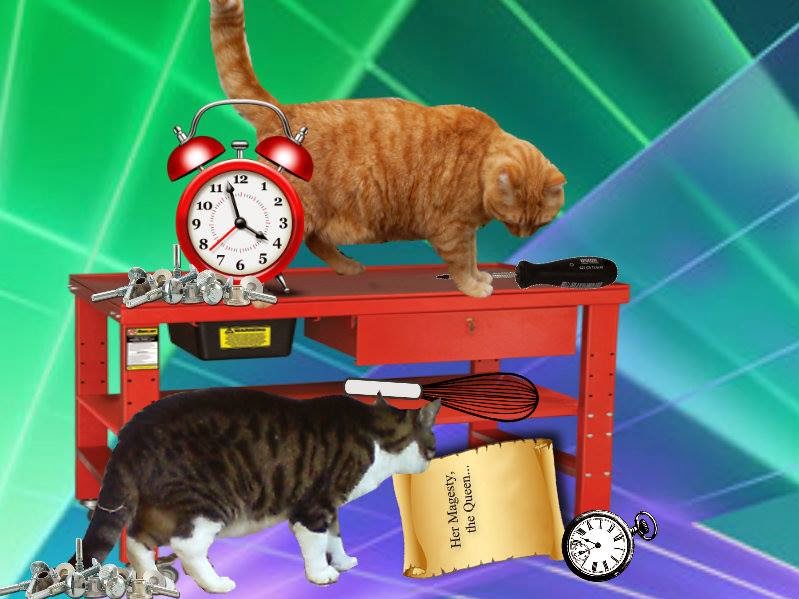 "Seville, did you pack everythin' we're gonna need?  This is an important mission.  We need to be extra prepared."

"Still gathering up a few odds and ends," Seville informed Nerissa. "Toss those nuts and bolts into a bag.  We might need them."

Nerissa pawed at one of the piles of nuts and bolts scattered about the room. "Where did they all come from?" he asked Seville.

Nerissa narrowed his gaze toward his brother.  "Here and there?"

"Well you see, every time I take something apart, I have leftover pieces when I put it back together again.  Those are the leftover bits from various projects," Seville explained.  "We might need some of them in London.  Could come in handy."

Earlier that morning, Nerissa and Seville had been summoned by Her Majesty, the Queen of England; Scotland Yard; and some guy who called himself The Keeper.  Nissy didn't know exactly what this guy kept but the scroll on which the summons was written looked extremely official.

The toaster transporter had been dinging away like it had never dinged before.  Every time Nissy turned around, another summons appeared.  The people of London were desperate for his and his brother's assistance.

"Should we bring along one of those scrolls?" Seville asked Nerissa.  "You know, to let everyone know we're really us and not some impostors tryin' to access Big Ben."

"Nah, I think they'll recognise us without the paperwork, Sivvers.  I'm pretty sure the Queen reads my blog."

Nissy grabbed a couple of extra backup whisks before ordering, "PREPARE THE TELEPORTATION DEVICE," and moments later the two cats were soaring through time and space on their way to London, England.  Gently gliding to a stop on the ground below Big Ben, they climbed out of their flying frying pan and looked around.  "Hmmm...  no official welcoming committee? MOUSES!" 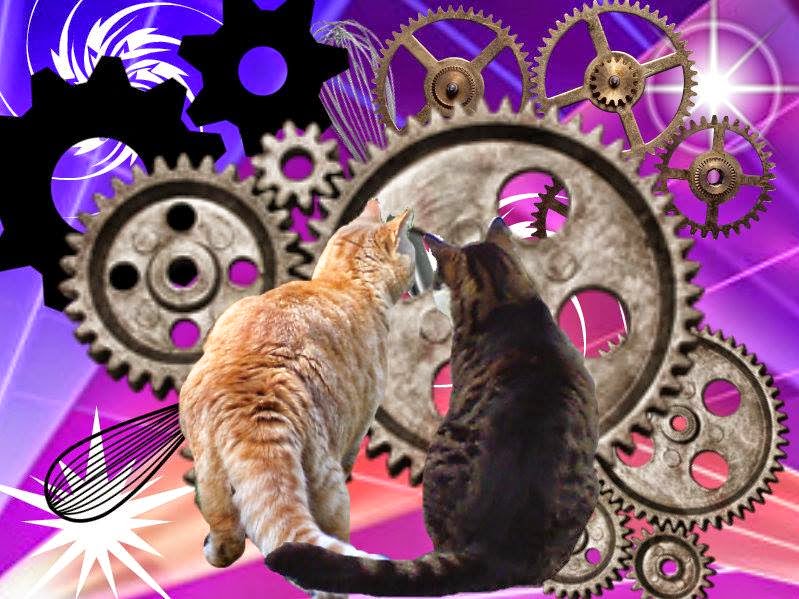 A very frazzled looking man, wearing a long lab coat, hurried out of the clock tower.  Clasping his hands to his face he exclaimed, "You've arrived!  Come along, moggies," and he grabbed each cat by a paw, dragging them into the tower.  "You're our last hope, you two. If you can't fix this, I don't think anyone can."

"Excuse me, Mister, but we can walk a whole lot faster if you let go of our paws," Nerissa huffed.

"Of course, of course...  And where are my manners?  I'm Alistair Thackeray.  I summoned for you this morning."

"You and just about everyone else in London," Seville said.  Looking around he added, "When do we meet the Queen?"

"I'm sure we'll meet her after we fix Big Ben," Nissy hissed to his brother.

Seville glared at Nissy before whispering, "And why did he call us moggies?  What is a moggy, anyway?"

"I think it's somethin' the English call cats," Nissy answered.  "Roll with it.  You know, when in Rome, do as the Romans do.  That sort of thing."

"Uh, yeah," and Nissy turned back to the man he now believed to be The Keeper, although still unaware of what exactly was being kept.  "Anywho...  Time's a wastin'.  Let's get this show on the road, Alistair.  What exactly is the problem?"

Alistair cleared his throat and began to explain.  "Early this morning, it was noticed that Big Ben had stopped chiming.  I immediately investigated and discovered that the mechanism inside the clock tower had stopped working.  Everything had simply ground to a halt."

"The entire city is in a panic," Alistair continued.  "The mechanisms inside the tower are powered by gravity.  As gravity is constant, the gears should continue moving.  If they've stopped..."

"I see," and Nissy sat back on his haunches.  "If the gears have stopped workin', somethin' has altered the gravity around the clock tower.  Is that why you called us in?  'Cause Seville and I are the world's leading experts in eggbeater-whisk time travelling-teleportation technology and you're aware that in order to travel through time, we have to manipulate the gravity waves..." 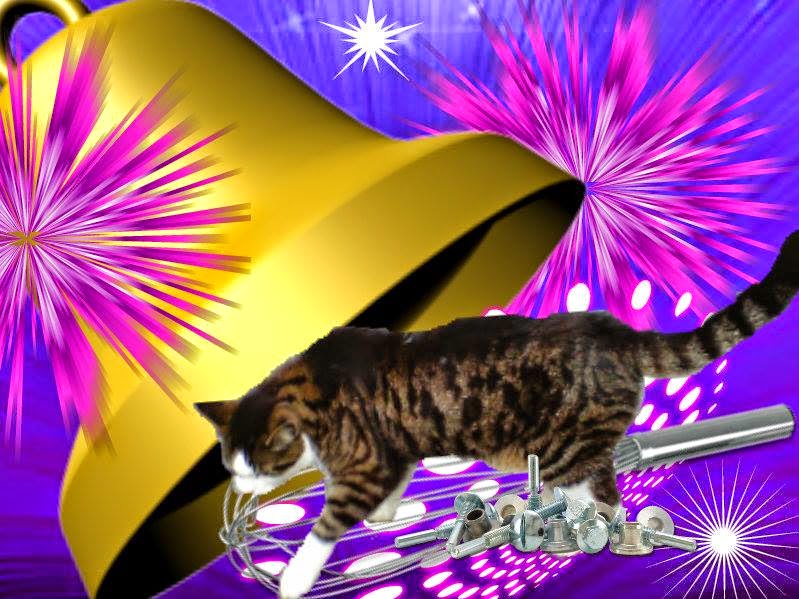 "Not exactly," Alistair interrupted.  "I called for the two of you because of the discovery I made while inspecting the gears in the clock mechanism.  See for yourself," and he pointed to the mechanism that powered Big Ben.

"What you have there are a couple of whisks," stated Nissy.  "They appear to be uh...  jammin' up the works, so to speak.  We're gonna have to get those out of there. Sivvers, pass me a wrench."

"Hold on Nissy!" Seville cried.  "Don't touch them.  I'm picking up electromagnetic anomalies in the space-time continuum.  The whisks appear to be generating their own magnetic force, altering the gravitational forces within the immediate area.  They're warping the very fabric of space and time."

"What could cause somethin' like that?" Nerissa questioned.  "Those whisks must be..."

"Out of sync with space and time," and Seville finished his brother's thought.  "They're creating a small time vortex in which the localised space-time continuum has been frozen.  It's that vortex that has stopped Big Ben from chiming."

"What are you two moggies going on about?" asked Alistair.  "Time vortexes?  Continuums?  Just tell me how those whisks got into my clock mechanism."

Nissy peered closely at one of the whisks.  "Oh-oh...  Sivvers take a look at this."

The two cats immediately recognised the whisk as being one of the whisks Nissy and Seville had brought with them to London.  "But we just packed that up this morning.  Packed it up after we were summoned here..." and Seville's voice drifted off.

"Well that explains the anomalies in the space-time continuum," muttered Nerissa.  "Big Ben is caught up in a time causality loop.  No wonder it's not chimin'!"  Grabbing the whisk with both paws, he gave it a mighty yank, freeing it from the clock mechanism.  "Sivvers, grab that other whisk and pull."

With the whisks removed, the gears in the clock mechanism stirred to life.  Nissy stood tall, holding his tail high in a confident position.  "All fixed up, Alistair.  Just in time, too.  This is New Year's Eve.  Can't imagine what would happen if Big Ben wasn't able to chime on the stroke of midnight to bring in the new year."

Alistair narrowed his eyes.  "Now explain to me again how those whisks got into my clock.  They were your whisks, did you say?" 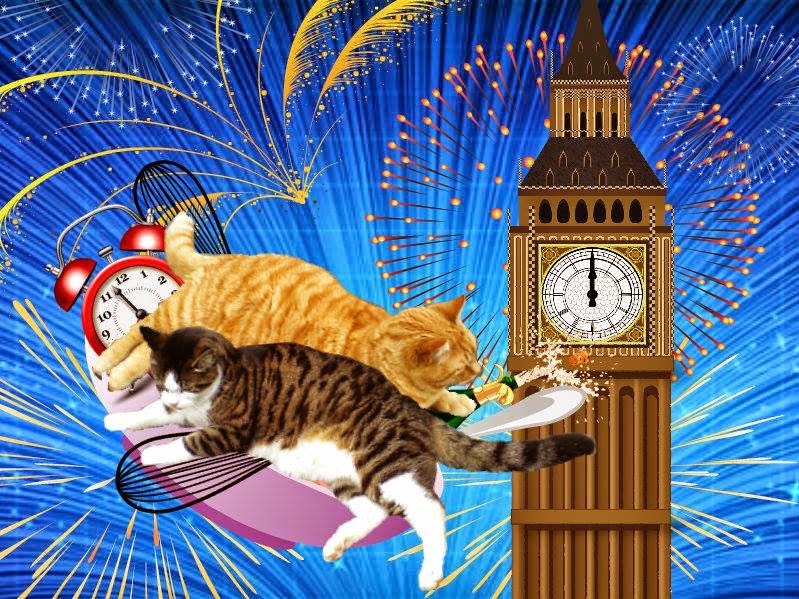 Nissy coughed.  "Time causality loops are very complicated things," he explained, hurriedly.  "Have to do with quantum theory and whatnot.  You probably wouldn't understand.  My whisks...  Seville's whisks...  The Galloping Gourmet's whisks!  Who knows to whom those whisks originally belonged.  Or will belong..."

Stuffing the whisks into the bag with the extra nuts and bolts the cats had brought from home, Nissy directed Alistair away from the clock mechanism and down the staircase.

"So tell me, what have we got planned for tonight?  Fireworks?  Music?  Snacks?  Midnight arrives here in London four hours ahead of Nova Scotia so Sivvers and I have a couple of hours to kill before headin' home to celebrate with the peeps.  Didn't receive a party invite from Buckingham Palace but I'm pretty sure that was just an oversight.  You think they'll have nip?  Oh, and while we're there, you can introduce us to the Queen.  I'm gonna wanna wish her a Happy New Year, for sure.

Posted by Seville at Nerissa's Life at 13:45