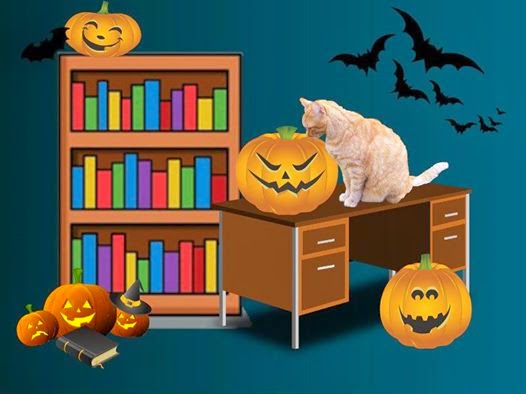 Padding into his office, Nerissa looked around, questioningly.  "Uh Sivvers, I thought you were in here workin' on your Hallowe'en assignment for Kitty Lit. 101.  Professor Lyon said our reports are due tomorrow."

"That?  I finished my report ages ago, Niss," Seville quipped back. "I'm working on this now."

Scattered about the office were pumpkins of various shapes and sizes.  A large one sat on the desk where Seville's typewriter had once been.  Nissy batted at a bat that flew by his head.  "Workin' on exactly what and Seville, what's with all the bats?"

A bat was flitting about beside Seville and he flicked it with his tail.  "Oh, those?  They came free with the cauldron.  I'll figure out what to do with them once I sort out these pumpkins."

"Pumpkins?  Cauldron?  MOUSES!  Just what have you been up to in here?"

"After finishing my book report on the Wicked Witch Murder by Leslie Meier, I decided to do some first paw research into all things Hallowe'en.  Cauldrons and pumpkins are both part of the whole Hallowe'en experience, Niss, and like I said, the bats were free," and he pawed one away from the pumpkin sitting on the desk.  "Bonus with purchase."

Nissy rolled his eyes.  "Glad to hear you didn't order up a witch," he added sarcastically.

"She's flying in tonight.  Remind me to ask Peep #1 to pick her up at the airport."

Seville pointed to a chair.  Nissy padded over to take a peek at the report sitting on it.  After quickly scanning the first page, he looked up.  "What's all this stuff about the colour orange?"

"Do I have to explain everything to you?" asked Seville with exasperation.  "Did you not notice that the cover of the book was orange?"

"You can't judge a book by its cover, Seville, although I do have to admit, it is orange.  But the book isn't about the colour orange.  It's about a murder and some witches.  MOUSES!"

"Actually," explained Seville, "the book is about a murder and some witches, in the summer leading up to Hallowe'en and at Hallowe'en, cats and peeps carve pumpkins and pumpkins are orange so obviously, the book is about the colour orange.  Plus, as a marmalade cat, I'm orange.  Orange is an extremely beautiful colour.  Good colour about which to write."

"Okay..."  Nissy took a peek at the second page of Seville's report.  "You write about anything other than the colour orange?

"Oh yeah, I wrote all about how I could easily relate to the story on account of my bein' an orange, marmalade cat and, of course, because of all those natural catastrophes.  You know, 'cause they sort of happened to us this year, too." 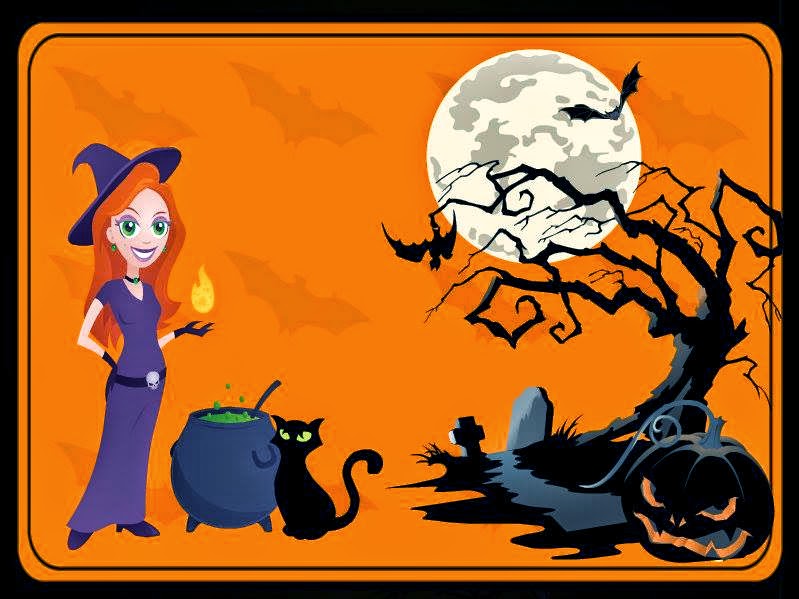 "You noticed that, huh?" Nerissa looked at his brother with a sense of newly found admiration. He hadn't thought Seville would have picked up on the similarities.

"Of course.  Lucy Stone and her family went through an awful lot of awful stuff in the book. First came all that rain and there was flooding. Our basement flooded this spring, remember? Then there was the wind. Hurricane Arthur attacked us this summer. Remember?  And they had power outages just like us.  Not sure how long theirs was but ours lasted over three days and that was long enough.  And they even had a tree fall down on their house! Well, just a little bit but still, it's like Leslie Meier was writing the story of our lives."

"We didn't have a tree fall down on our house, Seville."

"No but the people at the end of the street did."

"Oh yeah.  Forgot about that.  MOUSES!"  Nissy flipped to page three of Seville's book report. "You mention anythin' about witches in this report?  They're sort of integral to the plot."

"Of course I did, Niss.  I mentioned that one of the witches had a cat.  Remember Piewocket?"

"I liked Piewocket.  Would have liked him to have had a bigger role in the book but, you know, that's probably just me," Nissy mused.  "I'm a little biased, bein' a cat and all."

"I would have liked Piewocket to be an orange cat like me," muttered Seville.  "Of course, his bein' black was probably the more appropriate choice, in this case."

"Piewocket was a super nice cat.  I sure was glad when Lucy found him at Diana's shop and brought him home with her.  It would have been nice had the dog been more welcoming to Piewocket but not every dog likes kitties stayin' in their house, I guess.  But Lucy's husband Bill could have made a bigger effort," Nissy added.  "MOUSES!"

"Were you at all surprised that Diana didn't ask Lucy to go get Piewocket in the first place, Niss? Lucy just sort of found him at the shop while collecting the stuff for Diana's spells."

"That did surprise me, Sivvers.  Our safety and well-bein' would have been Peep #1's first priority in such a situation.  The peep would have been way more concerned about gettin' us than gettin' stuff to cure a little case of poison ivy.  Of course, the peep isn't a witch.  And she's never had poison ivy.  Might make a difference, I think."

"Yup," Seville agreed.  The cats sat in silence for a moment.

"You know what I liked best about the book, Seville?  I liked how the peep that I was sure was the murderer, wasn't.  The peep that I wanted to believe was the killer turned out to be an okay guy. Even a bit of a hero.  He actually stopped additional murders from happening.  And speakin' of that, I was so scared for Lucy at the end.  I thought she was gonna be a goner, for sure.  My whiskers were all a-quiver."

"I know what you mean!" Seville cried in agreement.  "I didn't like that guy one bit.  I wanted him to be the killer, so badly, just so that he'd get locked up in jail but then, he ended up saving Lucy."

"Like I said before, Seville, you can't judge a book by its cover."

Seville thought about his brother's statement.  "Well, maybe you can't but I can.  Like I said before, the cover of the book is orange.  It's a good colour."

Nissy stared at his brother.  "Anywho...  What exactly are you gonna do with all these pumpkins?"

"Well, I've carved them for Hallowe'en and now, I'm going to use their insides to make pumpkin soup.  That's why I needed the cauldron.  Lots of cats like pumpkin, Niss.  At least that's what I've heard."

Nissy pawed at a book lying on the floor next to Seville's cauldron.  "This a book of spells or somethin'?" he asked. 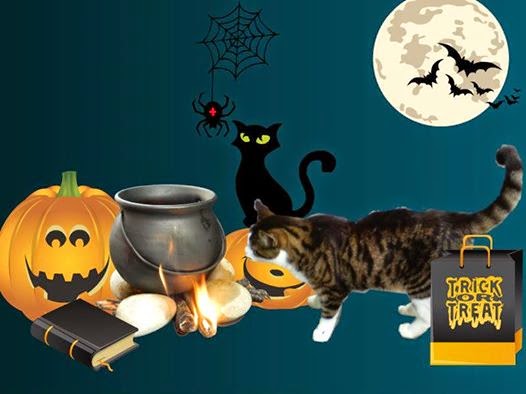 "Nah, it's just one of the Peep's cookbooks.  I needed a recipe for the soup.   Pumpkin, cream and some stock and stuff.  I'm going to add a paw full or two of nip as I'm pretty sure it will be an improvement on the recipe."

"Definitely," agreed Nissy.  "Maybe you can take a bowl of this stuff to Professor Lyon, tomorrow.  Might get you bonus marks on your book report or somethin'."

"You're so right, Niss!  It'll be perfect.  After all, pumpkin soup is orange.  Just like the book.  He's going to love it."

"And perhaps you can take him the bats, too," added Nissy, before swatting one that was flitting about by his tail.  "Those bats are drivin' me batty, for sure.  MOUSES!"

Posted by Seville at Nerissa's Life at 14:08