the root of the matter

About a month ago or so, the peeps had the driveway painted.

Yeah, I know what you're thinkin'.  You're thinkin' that my peeps got out there and spray painted that ol' driveway in a bright yellow and blue checkerboard pattern, overlaid with purple and orange polka dots along with a few golden stars.  And that could have happened!  It was actually under consideration but I got a whiff of those plans of theirs and put the kibosh on 'em.  MOUSES!

Needless to say, the driveway was painted black.  Some sort of sealant, I understand. Somethin' to seal the driveway in and keep it from flyin' away or whatever driveways like to do.  Weird, I know. Welcome to my life.

Anywho...  In order to paint the driveway black, stuff that was on said driveway had to be moved.  Some of the things needin' to be moved were pots of plants.  Some of those plants were meant to be there and others were...  well...  there just were.  They just were there.  Goodness knows for what reason.  Peep never got around to plantin' them, I guess.  I don't think they were ever supposed to be sittin' on the driveway but they were so they needed movin'.

Two of the pots needin' to be moved had some valerian growin' in 'em.  Ever heard of the stuff?

I first encountered valerian, last year, when Ol' Peepers went shoppin' for nip and came home with valerian, also known as Valeriana officinalis but never known as the nip.  MOUSES!

At the time, I gave the plants a good sniff and explained to Peep #1 that the plants were not, in fact, nip.  They didn't look like nip, nor did they smell like nip.  Also, after sniffing 'em, I, Nerissa the Cat, was not nipped.  Again I say, MOUSES!

Peep #1 ignored me.  She said they were pretty.  Pretty?  Who cares about pretty when you're wantin' the nip?

Since then, the number of valerian plants in and about these parts has increased.  I must sadly report that the number of nip plants in the garden has not but that, my friends, is another post for another day.

While there is still a scarcity of nip plants, the valerian ones have been multiplyin', explainin' those two pots of the stuff that were sittin' on the driveway. 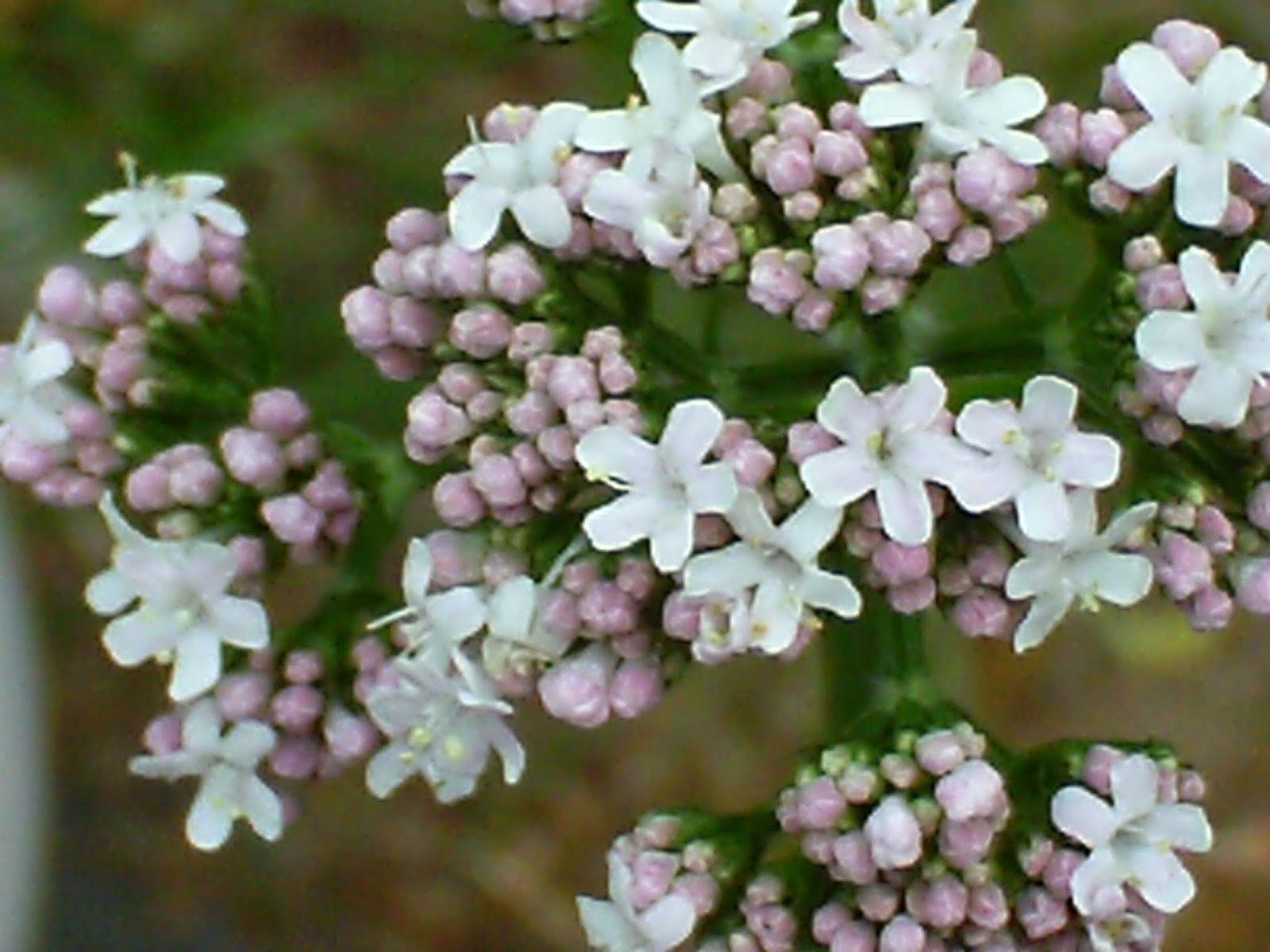 Now those two pots in question had been sittin' on that driveway for most of the summer.  They had been sittin' in that very same spot and some leaves had settled in and around them. Unbeknownst to the peep, the valerian plants had sent their roots out through the holes in the bottoms of those pots and into those leaves which were beginnin' to decompose.  When Peep #1 moved the pots, she dislodged said roots.

Bein' fairly unobservant 'cause, you know, she's just a peep, Peep #1 moved the pots of valerian and thought nothin' more of it.

Next thing we knew, Seville was on the scene.  Was it a bird?  Was it a plane?  NO, it was my brother and he was goin' insane!

I remembered how Peep #1 had been ravin' about the scent of the valerian in the summer.  She had been stickin' her nose in the flowers and oohin' and ahhin' over, from what I could tell, pretty much nothin'.  It's not like it was nip.

The fact that the peep liked the smell of the valerian was inconsequential.  Peeps like all sorts of weird smells.  It takes a cat's educated nose to sniff out the good ones.

I pawed my way over to Seville to see just what was the attraction.  Seville was goin' nuts, rubbin' his cheek against one of those valerian roots protrudin' from the pot.  He looked like he was in Heaven.  Again, I shook my head in dismay. 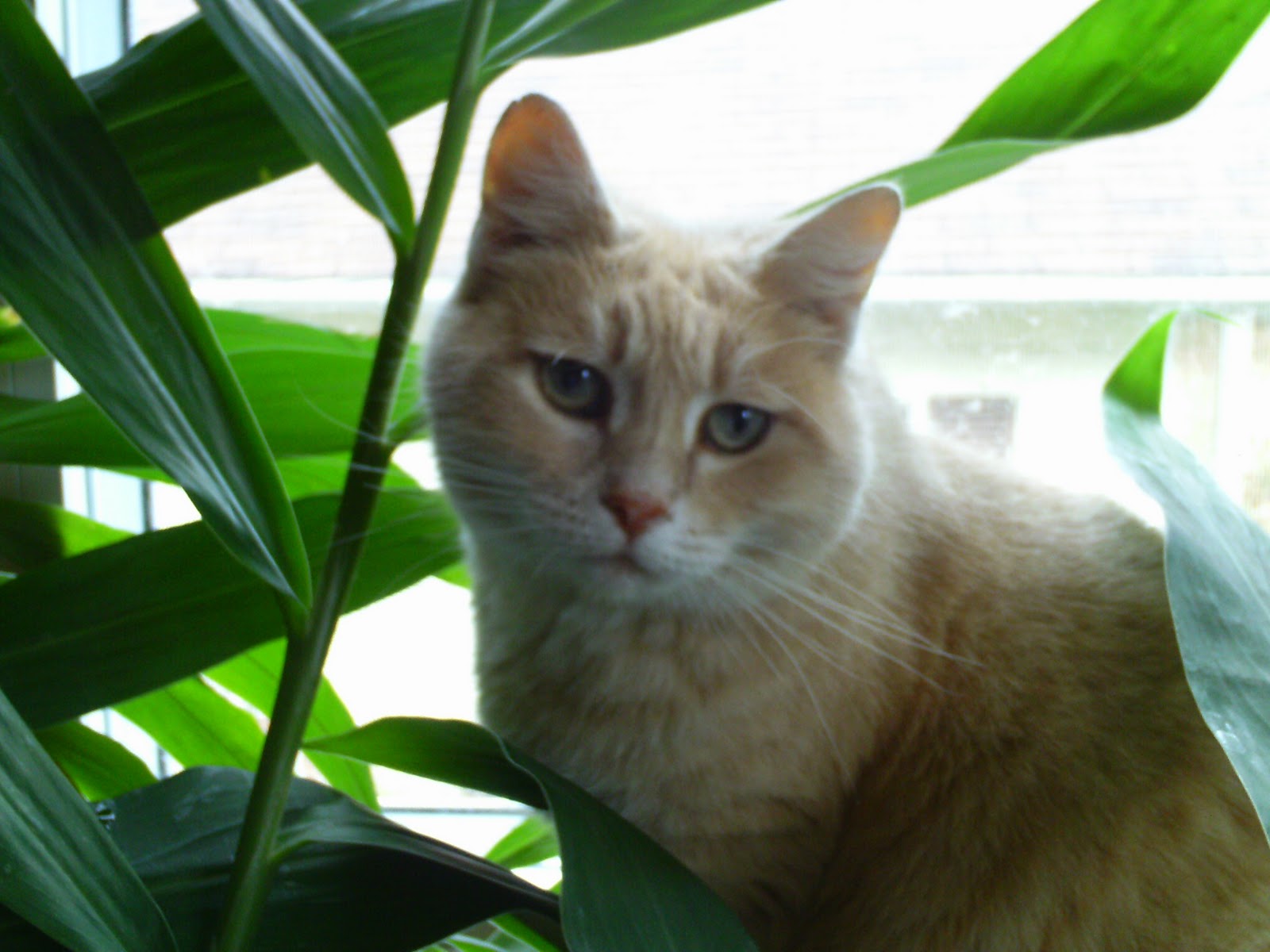 "Smells like stinky feet!" Seville cried. "Niss, you have got to try this."

I stared at my brother in disbelief. Stinky feet?  MOUSES!

I then made a mental note to tell my sister, Mason, about the valerian roots. She has a thing for the peeps' shoes. I'm thinkin' there might be a connection.

Valeriana officinalis...  the official smell of stinky feet.  Again I must say, MOUSES!

As I, Nerissa the Cat, was not interested in immersing myself in the smell of stinky feet, I padded into my office and flipped on the ol' computer.  I needed to do a little research on this valerian plant.

What I found was shocking.  Surprisingly, this valerian stuff is sold to peeps.  Sold to peeps, for peeps.  Some sort of sleep aid or somethin'.

How odd.  Yes, I found it to be very odd that peeps would take the stuff to make 'em sleepy while my brother was outside, rollin' in it and gettin' nipped.

Then I thought about the fact that my true love, the one and only true nip, is also used by peeps in strange ways.  It's used to calm 'em.  It's true.  Peeps don't get nipped on the nip.  Never once have I seen my peeps nipped on the nip.  In fact, it has the opposite effect.  Peeps don't know what's good for 'em, you see.  Obviously, the same thing applies to this here valerian.

What's more, when Peep #1 was ravin' about the smell of the valerian, she was sniffin' the flowers. She was not rollin' around on the roots.  Looks like my peep is not a lover of the smell of stinky feet unlike my sister Mason and apparently, my brother Seville, too.  But then, we all know that peeps have strange senses of smell.  I mean, they even buy bottles of stink.  MOUSES!

Of course, seein' peeps rollin' around on the driveway, rubbin' their faces up against the roots of a valerian plant, would be quite a sight to see, for sure.  Perhaps their aversion to such an act is an aversion to the act itself and not the smell of the stinky feet.  I shall have to pay closer attention to my peeps and their interactions with their shoes.  I shall have to observe whether or not either of them likes to stick their nose in those shoes, as my sister Mason so loves to do.

Luckily for me, as we're headin' into the cooler weather of a Canadian fall and then, of course, winter, there will be ample opportunities to observe the peeps with their shoes.  Cooler weather usually brings the peeps into their indoor habitat where, quite often, lyin' about are shoes.

As for me, I, Nerissa the Cat, am still a lover of the one and only true nip.  Nothin' beats a good biff bag or nip mouse, filled with the nip.  The proper nip.  The nip of cats, everywhere.  Rest assured that when I write my letter to Santa, I shall be askin' for nip and NOT, my friends, the smell of stinky feet.  MOUSES!

Posted by Seville at Nerissa's Life at 13:22