invasion of the pumpkin people 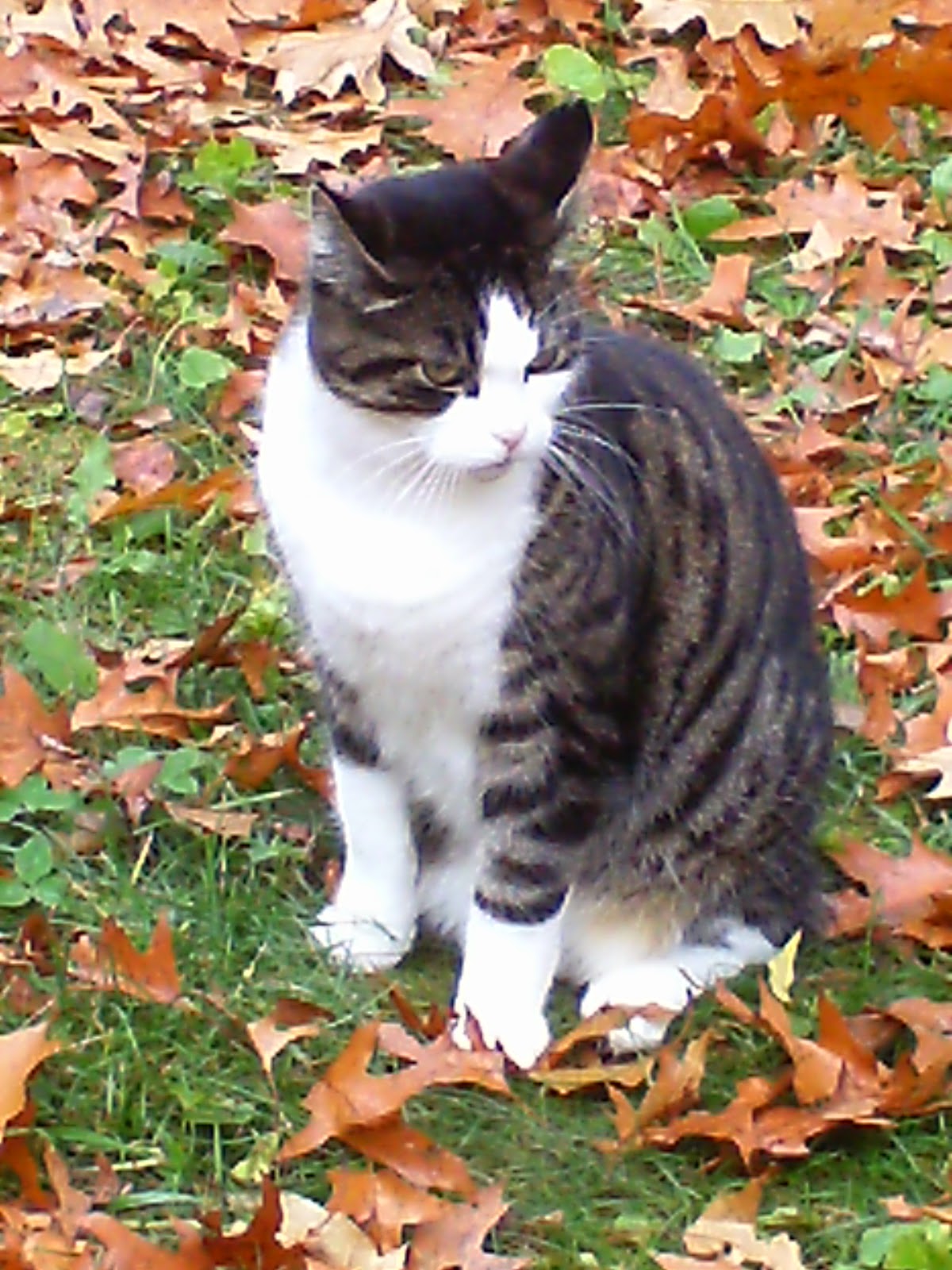 For all of us Canadian kitties, this is Thanksgiving Weekend.  That's right, we northern kitties start celebratin' early, compared to our southern counterparts.  Oohhh...  and those in Alaska who are to the north and/or west of the rest of the kitties like me.  Hmmm..  Or should that be I?

Anywho...  this is Thanksgiving weekend, also known as prime pumpkin season, here in Nova Scotia.  Not 'cause I live with three pumpkin-coloured brothers and a sister who comes super close, although she's lighter than your traditional marmalade kitties.  Lighter in colour, by the way, and not by weight.  And I mustn't forget my three calico sisters and my tortie auntie, all of whom are also sportin' the pumpkin colours.  I'm tellin' you, the marmies are takin' over. MOUSES!

All the local farm markets and whatnot are filled to the brim with the things.  The pumpkins, I mean, and not the marmie cats.  There are still some pumpkins in fields, too.

And then there are the gigantic monstrous ones that peeps try to grow as large as they can until they're too heavy to take anywhere without the aide of a tractor or a forklift or somethin'.  Again, I'm talkin' about pumpkins and not those marmie brothers of mine although, truth be told, if Rushton gains any more weight, the peep will be needin' a forklift to lift him, for sure.

Before anyone panics 'bout Rushton's size, Peep #1 says it's okay 'cause he's obviously got some coon in him.  Like a WHOLE, ENTIRE COON, I do believe.  He's naturally big.  He can stand on his hind legs and reach right up to put his front paws 'round Peep #1's waist.  Yeah, just like a dog. MOUSES!

But back to the pumpkins.  Farmers 'round here grow those gigantic, monstrous ones for Cinderella, I do believe.  They're gonna be turned into carriages or somethin'.

Then there are the pumpkin people.  No, they're not peeps who are the colour of pumpkins like the marmalade cats.  Rather, they're peeps who ARE pumpkins.  It's true.  Their heads are made of pumpkins.  MOUSES! 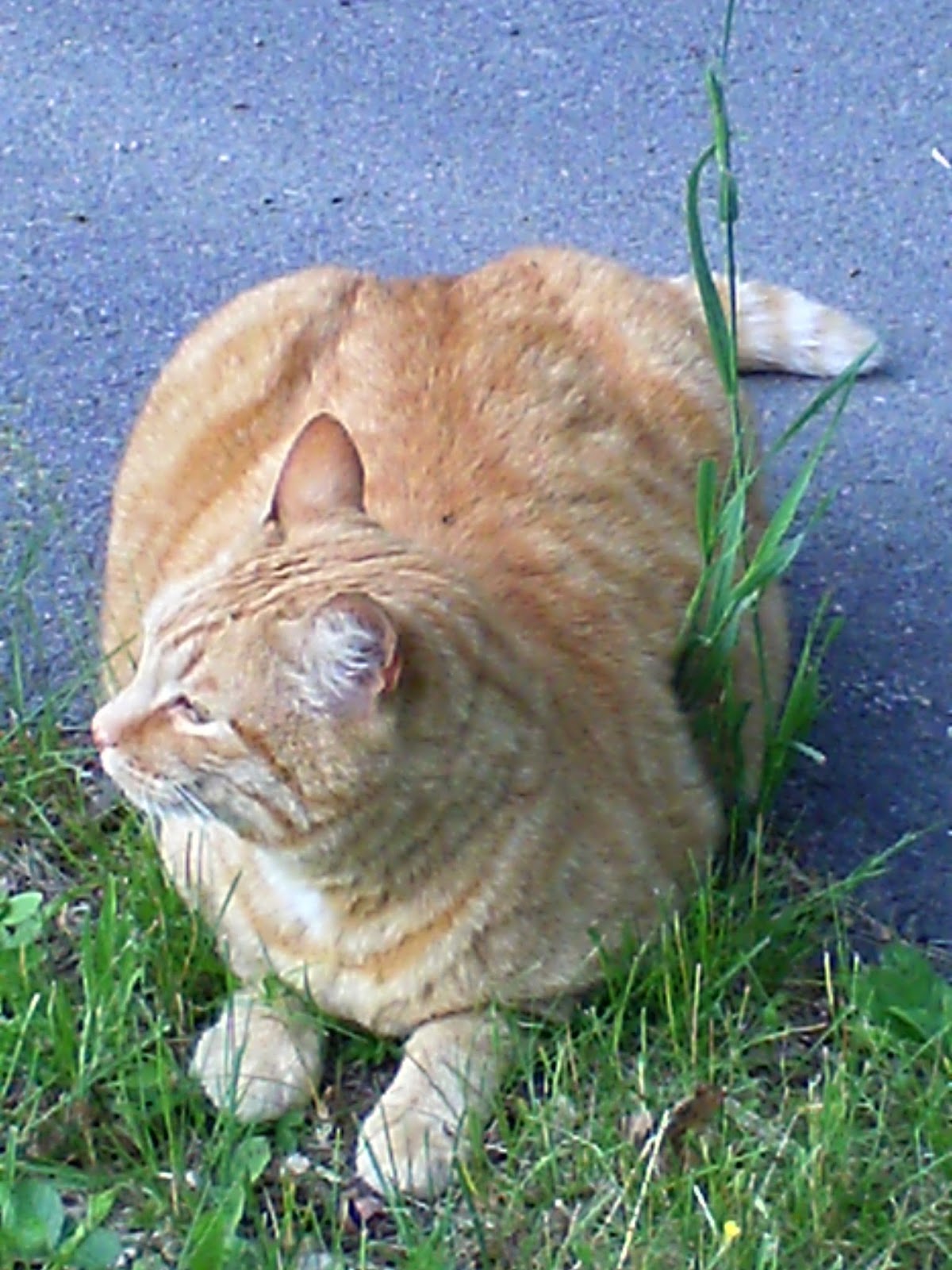 And just like the actual pumpkins, the pumpkin peeps are everywhere, too.  They're multiplying.  It's like the invasion of the pumpkin' people or somethin'.  No word yet on whether or not aliens are involved however, that is a story on which I am workin'.  Again I must say, MOUSES!

Closer to home, there are pumpkins, too.  In fact, there was some pumpkin activity goin' on at my house, yesterday.  Yup, it's true. Took place in my very own kitchen.

Like every year around this time, Peep #1 bakes a pumpkin pie or two.  Yesterday was the big day.  Yes, my friends, pumpkin pies were baked.

I knew the peep was gonna be makin' those pumpkin pies and truth be told, I was a little concerned for the health and welfare of those peeps whose heads are made of pumpkin but it turned out that I needn't have worried.  Peep #1 used pumpkin from a tin.

However, when I saw that ol' tin of pumpkin, I was reminded of my recent blog post, "they are? MOUSES!" in which I came to the realisation that my turkey cat food is actually made from turkeys which are, in fact, birds.  Yes, the deceit of the tins.  Turkeys can come in tins.  Who knew?

Pity the poor pumpkin people whose heads were used in the cannin' of that tinned pumpkin.  I'm just hopin' I didn't actually know any of them or anythin'.

Anywho...  back to the bakin'.  The peep got out her tin of pumpkin in preparation for the bakin' of those pies.  I got a good look at that ol' tin and noticed that on it, it read, pure pumpkin.  Now this came as a bit of a surprise to me.  I looked at the tin and then over at the peep and said, "Pure pumpkin?  What else would be in a tin of pumpkin?"

Apparently, it could have been squash.  Non-pumpkin, squash.  Peep says some companies do that. They try to pass off regular ol' squash as pumpkin.  I wonder if that's to save the pumpkin people. Could be.  Never heard tell of any squash people 'round here.

So the peep got out her tin of pumpkin and all the other necessary ingredients like eggs and cream and spices and...  and did I mention cream?  Mmmm... 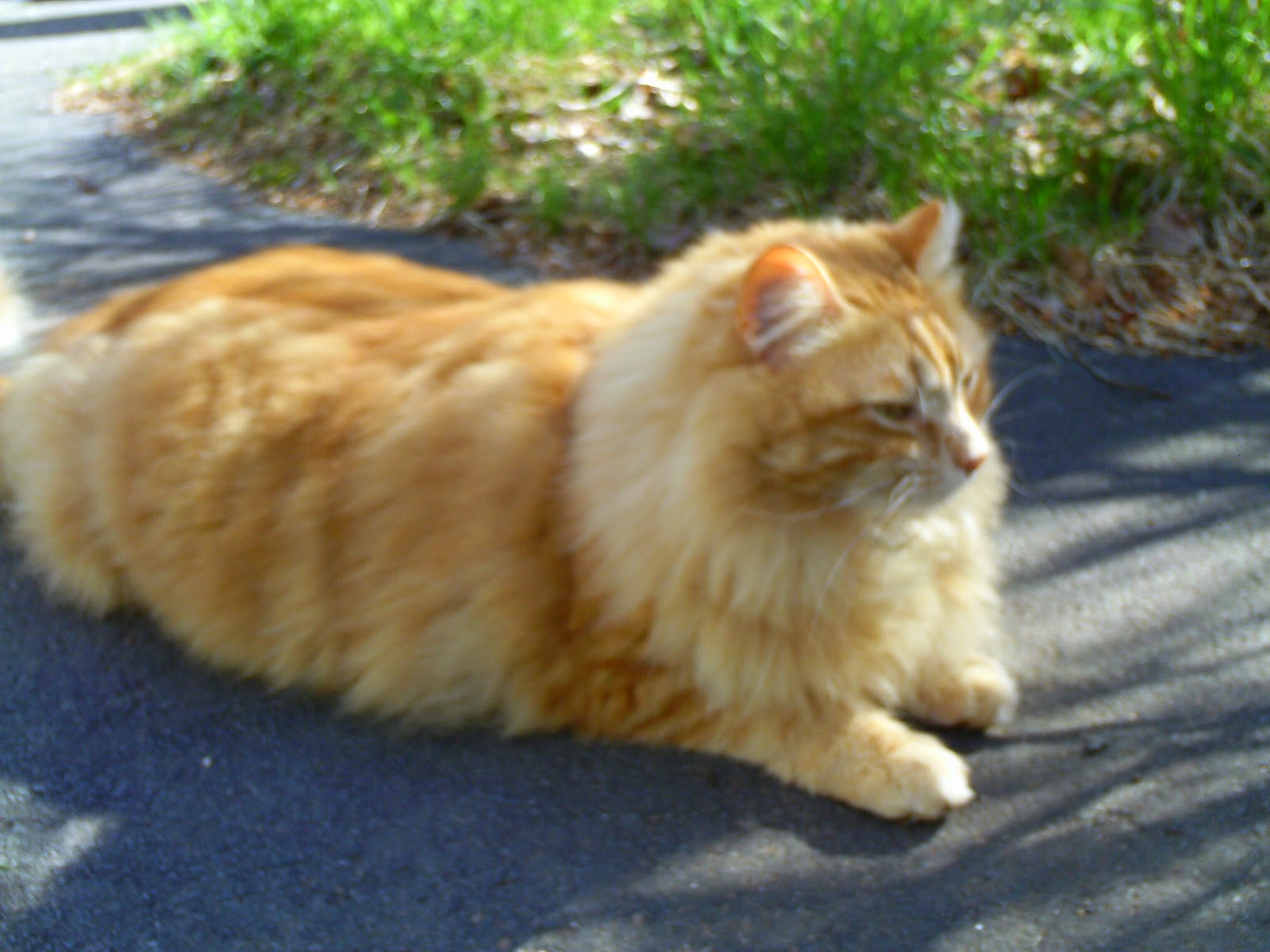 She had to start by makin' the pie shells.  Now I won't go into a whole lot of detail 'bout the makin' of those pie shells on account of the fact that this is a blog post and not the longest novel ever written in the history of catkind but suffice it to say, she made a mess.  You ever hear of fur flyin'?  Well, think about that and then add the letters l and o so that you've turned the word fur, into flour.  Yes, my friends, there was flour...  EVERYWHERE.  Peep will be cleanin' up bits of flour from now until Christmas, I do believe.  MOUSES!

That reminds me, Peep #1 has some extra laundry to do, this week.  Yup, she was wearin' the flour like it was some sort of fashion statement or somethin'. She still is wearin' a bit of it, I do believe.  I had better remind her to wash her hair today, too.  Again I must say, MOUSES!

Once the pie shells were made, it was time to start the fillin'.  She opened that ol' can of pure pumpkin - possibly made from the heads of pumpkin people whom we have hopefully never met - and spooned it out and into a bowl.  Then she added the eggs, cream, sugar and spices.  So far, so good.

But then, my friends, the peep got out a whisk.  I panicked, for sure.  Was it one of Seville's whisks? Would it transport my peep through space and time using eggbeater-whisk time travelling-teleportation technology?  Would the peep disappear right before my very eyes?

Thankfully, the whisk was a dud.  Yes, it whisked up the pumpkin and whatnot, all right, but there was no time travellin' involved.  Close one.  Whew!

After the whiskin' was over and my heart stopped beatin' a mile a minute on account of the time travelling-teleportation scare, the peep poured the pumpkin filling into the pie shells and she baked 'em.  They took a long time to bake which was good, I think, on account of the huge mess Ol' Peepers had made in my kitchen.  She needed that bakin' time to get the place cleaned up.  My gosh my peep is a messy baker.  MOUSES!

Hmmm...  now THERE'S a title for a cookbook.  The Messy Baker.  LOVE IT!  I'll have to mention that to the peep, sometime.  She could write a series.  Could even end up on television or somethin'.

In the meantime, I'm gonna be thinkin' about all the things for which I have to be thankful.  After all, this is Thanksgiving Weekend. 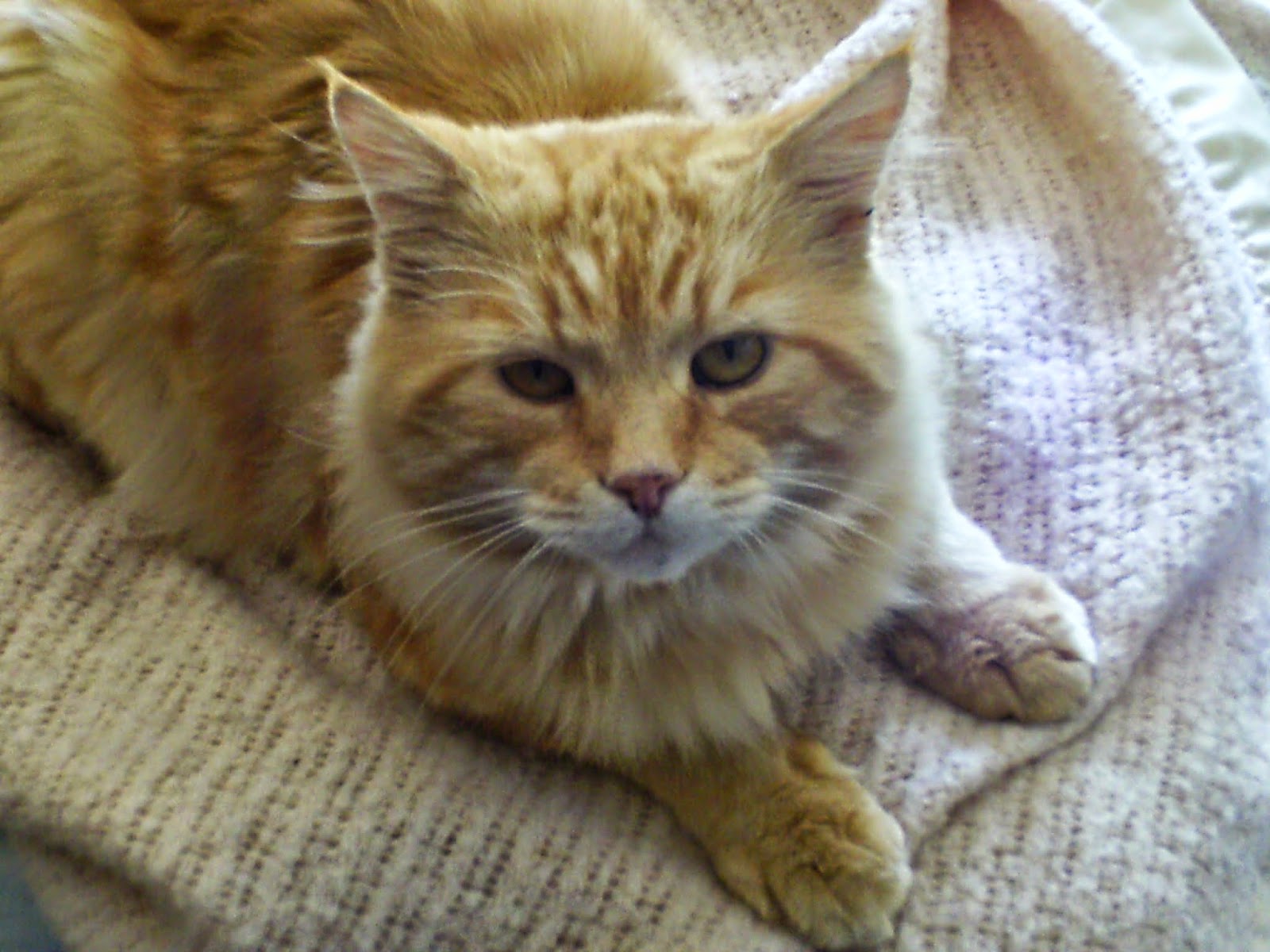 Posted by Seville at Nerissa's Life at 13:36