Durin' the last couple weeks, the peeps have been havin' some stuff done in the yard and whatnot.  Stuff that either they couldn't manage themselves or just never got around to doin'.  That sort of thing.

I'm of mixed feelings 'bout this whole business.  On the one paw, it's nice to see things finally gettin' done.  On the other paw, it means there are peeps on my property who are not my own personal peeps.  Peeps who I can't always control.  Peeps who are not necessarily charmed by my charmin' personality and willin' to wait upon me, hand and paw.  MOUSES!

What's more, havin' been born feral, I'm not big on stranger peeps.  Not that they're strange or anythin'.  I'm assumin' they're perfectly normal.  I just don't know 'em.  That's makes 'em strangers, to me.

And when you're tryin' to avoid havin' the stranger peeps see you, supervising 'em can be very difficult.  In fact, it's almost impossible.  It's hard to tell 'em what to do when you're too scared to talk to 'em.  MOUSES!

Perhaps had I been a bit braver 'bout bein' seen and heard, our new loo would, in fact, be a loo.  Or at least a nip bed.  Instead, it's just gonna be a plain ol' flower bed filled with inedible flowers, without a nip plant in sight.

Of course, I can't really blame stranger peeps for the lack of nip and loos.  I'm pretty sure Peep #1 had somethin' to do with that.  Again I say, MOUSES!

I waited until my peeps and the stranger peep of the day were sittin' on the veranda, havin' coffee.  I figured I'd be safe.  It was familiar territory and I could count on my own personal peeps bein' under my control.  I mean, surely they wouldn't show me up in front of company, right?

Well actually, it was right.  The nightmare I encountered had nothin' to do with my peeps.  It was a bird.

Anywho...  Late Thursday mornin', I walked onto the veranda, eyeing the three peeps sittin' there, all in a row.  Peep #1 immediately said my name and encouraged me to come in a little further.  I knew this was a good sign 'cause she would never in a million - or even a billion and yes, she is old enough for me to say that - years encourage me to come closer to someone who would hurt me.  I knew right away that the stranger peep must be a good stranger peep and someone who liked and appreciated cats.  I figured I was safe.

Seville, not one to want to miss out on anythin', followed behind me.

And then it happened.  Out of nowhere came the roar of a somethin' so loud and obnoxious it was deafening beyond belief.  The noise was everywhere.  Above me, to my right, to my left...  It sounded like it was even under my paws.  My eyes grew wide with fear and I started to panic.  I wanted to run but didn't know where.  The sound was everywhere.  To where could I escape? 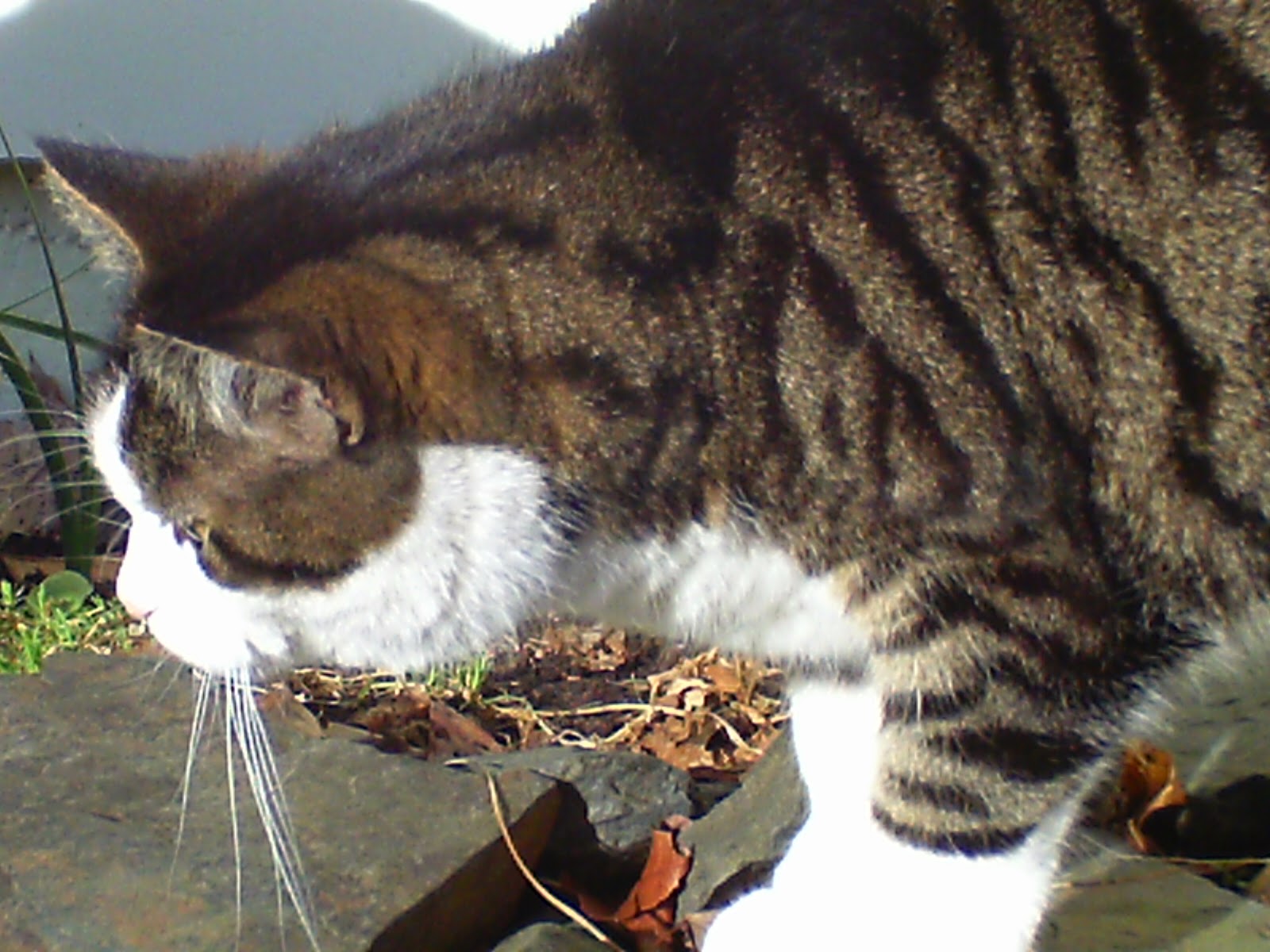 I noticed that Seville was scared, too, although not nearly as panicked as I. I'm gonna have to have the peep check him for ear mites.  I think he must be hard of hearin' or somethin'.

The cries of the flyin' beast were bouncin' off the walls, floor and ceilin' of the veranda.  They were reverberating everywhere.  There was nowhere safe to hide.

I looked over at my fist peep thinkin' that maybe she was caterwaulin'.  She had gone to caterwaulin' practise the previous night and although her practicin' had never before been quite that horrible, there's always a first for everything.

Peep #1's mouth was closed.  She wasn't caterwaulin'.  The noise was not coming from her.  She looked concerned for me but not scared for herself or anythin'.  Clearly the peep was insane.

I realised that the only thing to do was to make a run for it.  On the veranda was my marmie brother who had apparently become hard of hearin', a stranger peep and my personal peeps with at least one of 'em havin' gone crazy.  The veranda was no place for me.

I tossed aside any thoughts of supervisin' the peeps that day and ran.  I ran as fast as my little paws would carry me.  I ran and I ran and I ran until I was safe and sound in the backyard, hidin' under the deck.  The noisy and terrifyin' beast wasn't gonna get me.

As for the peeps, they were welcome to join me under the deck but as they showed no inclination to follow, I figured they'd be consumed by the beast.  I crossed my claws that they had had the foresight to have a good supply of food in the house and wondered if I'd be able to figure out how to open the tins.  How hard could it be?

Eventually, the angry cries of the beast faded off into the distance and an hour or so later, I ventured out from under the deck.  I discovered that my peeps and the stranger peep had all survived the attack.  Seville was safe, too, as was the rest of my fur family.

It turned out that the terrifyingly noisy beast of my nightmare of all nightmares was, in fact, a bird.  A big ol' metal bird from the nearby air force base.  It was flyin' a little lower than normal, I guess, and that's why it had been so loud.  Peep #1 explained all this to me.

Just how low do they have to fly?  MOUSES!  Had I known it was a plane and not the monster of all monsters, I would have thought the thing was gonna land.  Land right there on my lawn or somethin'. Or maybe even on the street. 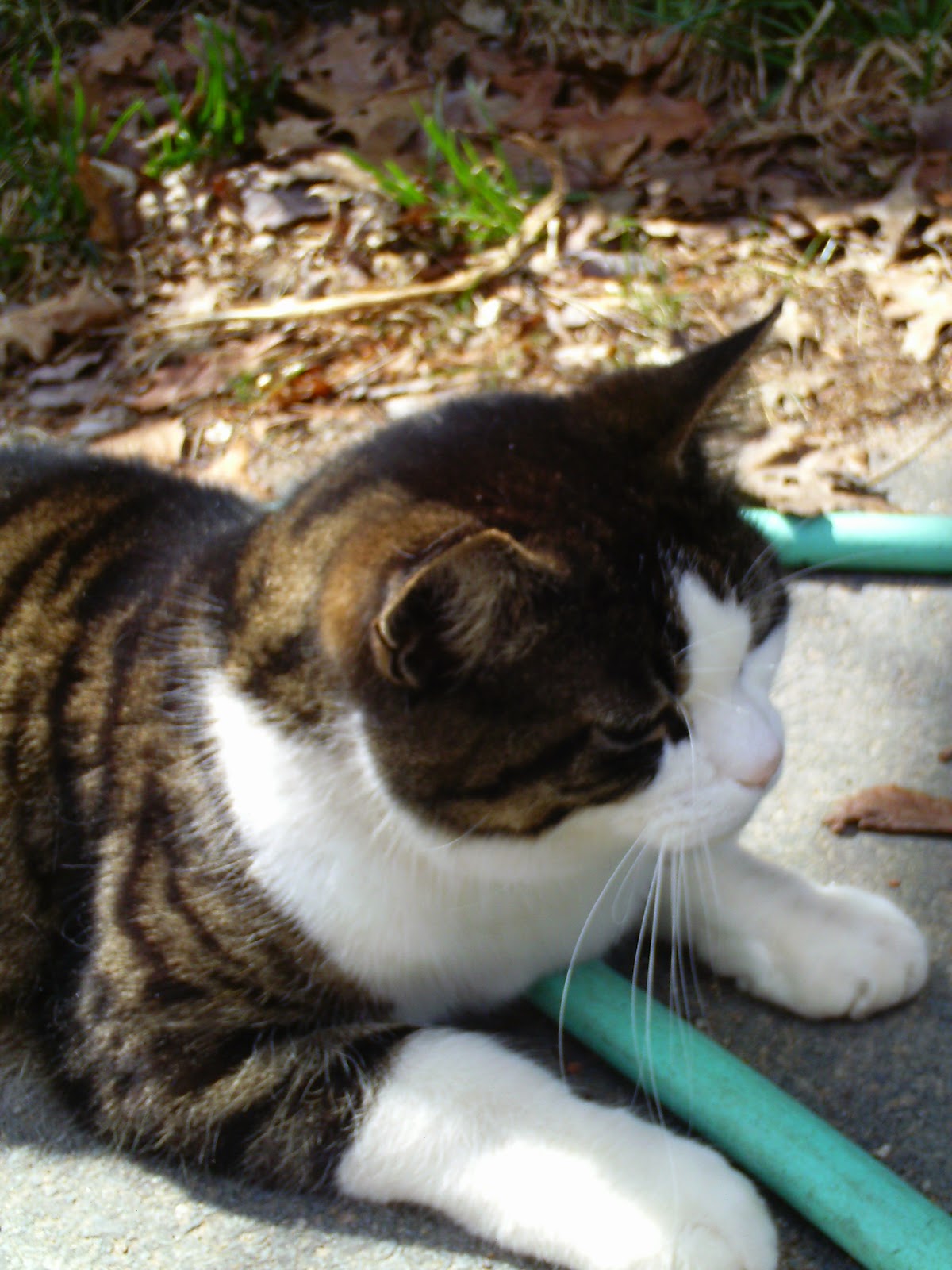 Peep #1 suggested that perhaps the pilot was tryin' to get a glimpse of me, the world-famous bloggin' cat.  I suggested to the peep that if they wanted to see me that badly, she could take a picture and show it to 'em.  A nice quiet, noiseless picture that wasn't so scary.

Best thing about my paintin' the message myself is that the peeps will never know.  They never jump up there themselves, you see.  Just hope no one flyin' a plane mentions to my peeps that there's a newly painted message on said roof.  I can just imagine the noises Peep #1 would make upon hearin' that news.  Yeah, I can just imagine.  MOUSES!

Posted by Seville at Nerissa's Life at 13:46