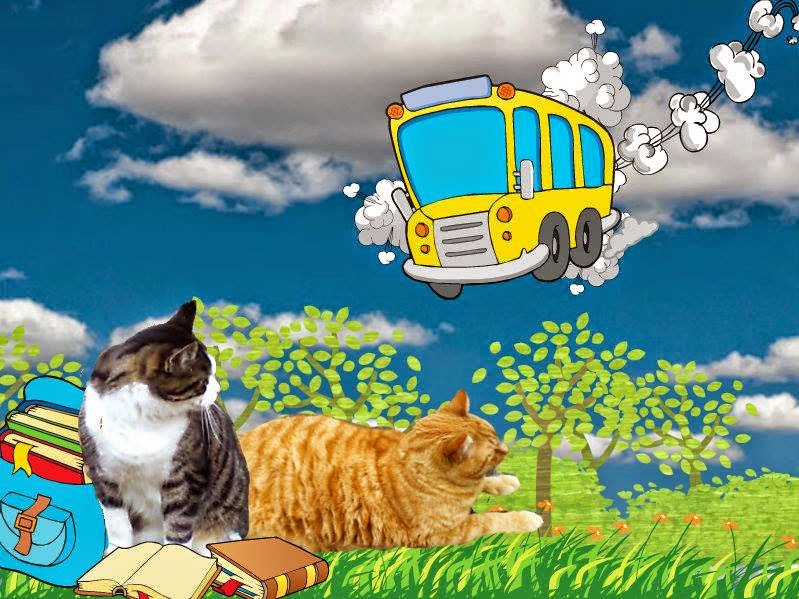 "No need, Niss.  Got it covered.  You and I are going back to school the old-fashioned way.  Our school bus will be here to pick us up any minute now."

While waiting outside for the bus to arrive, Nissy glanced over his shoulder. Flying toward them at breakneck speed was a large yellow object, spewing clouds of smoke out behind it.  "Holy flyin' yellow succotash, Sivvers!  What the mouses is that?"

"That's our bus," answered Seville, in a very matter-of-fact tone.  "Right on schedule, too.  Nice."

"Cause I helped the university upgrade to eggbeater technology.  They can teleport, now.  That's how come we got a discount on our tuition," Seville explained.

"Awww..." Nissy sighed disappointedly.  He shuffled from paw to paw, kicking a small rock lying on the ground.  "I thought we got that discount on account of all my writing work on my blog. MOUSES!"

As the two cats climbed into the school bus, dragging their book bags behind them, Nissy couldn't help but notice that there were only two rows of available seats.  The rest of the bus was filled from floor to ceiling with eggbeaters.  "Exactly how many eggbeaters does this thing take to fly?" he asked his brother.

"A few more than I had originally anticipated." Seville admitted before adding in a low voice, "and when Peep #1's credit card bill arrives this month, whatever you do, don't let her see it.  Turns out, I would have been better off using it to just pay full price for our tuition.  Do you have any idea how much eggbeaters cost by the case?  I thought they'd give me a discount as I was buying in bulk but the eggbeater manufacturer thought differently.  I'm not positive but I think I may have triggered another world-wide eggbeater shortage."

The flight to the school proved to be surprisingly smooth sailing and it wasn't long before the bus was gently landing by the school's main doors.  The driver wished the boys good luck, reminding them that he'd be waiting to pick them up at days' end.  Seville tossed him a bone, complementing the driver on his teleportation skills.  Mr. Bernard woofed a reply of thanks both to the complement and the snack.

"Our classroom is on the main floor," Nerissa told Seville.  "It's at the end of the hallway with the green floor.  We're supposed to follow the arrows."

With great trepidation, the boys followed the arrows down the hallway, as Nissy had instructed. Along the way, they passed a number of students.  Some appeared to be very friendly while others looked down-right mean.  Nissy hoped their class would be filled with the nicer mannered students. The ones with smiles on their faces and, perhaps, treat temptations in their lunch bags. 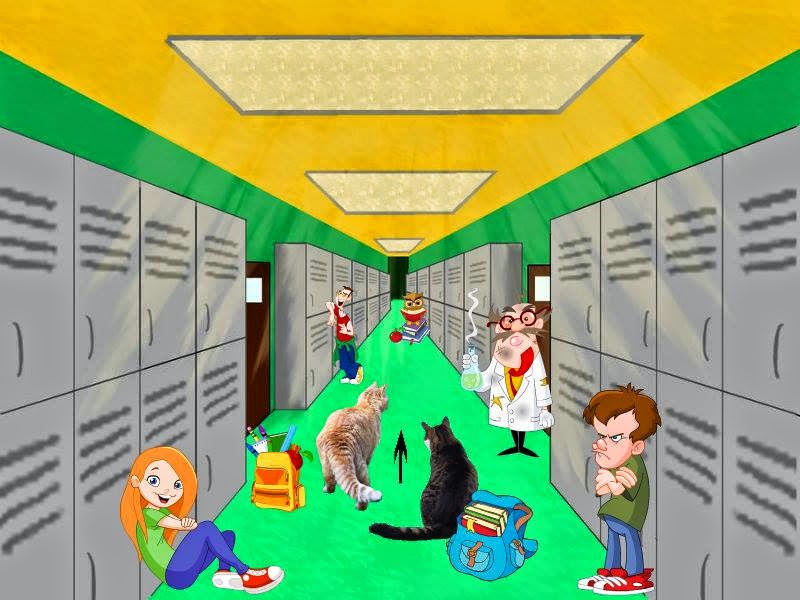 Seville decided right then and there to prepare himself for the worst.  If any of the mean-looking students were in their class and gave them a hard time, he would pee on them.  He sprayed a locker in the hallway to make sure he was ready for whatever came his way.  The young boy standing next to the locker cried in disbelief, and shook a fist at Seville.  Seville twitched an ear and gave the boy the ol' stink eye.  The boy folded his arms across his chest and huffed.

"What course did you sign us up for again?" Seville asked Nerissa.  "Are we taking the bird courses?  Bird Anatomy sounded pretty good.  Cooking with Chef Robyn did, too."

"I was going to sign us up for the cooking class, Sivvers, until I found out that Chef Robyn really is a robin.  Her speciality is cooking with worms."  Nerissa made a face and gave his head a little shake. "The anatomy class was full as was the horticultural class for growing nip.  But have no fear, I found us the best class of all."

The boys stopped at the end of the hallway.  Before them stood a classroom door and blazoned across it were the words, Kitty Lit. 101.

"We're gonna be studyin' the works of Cujo and Basil and Herman and...  and the late, great Sparkle?  The literary cats of the blogosphere?" asked Seville in awe.

"Nope, no blogs this time, Sivvers.  Kitty Lit. 101 is supposed to concentrate on the wonderful genre known as the cozy mystery."

Seville's jaw dropped.  "There are cats writing cozy mysteries?  You know any of 'em, Niss?"

"Actually," and Nerissa cleared his throat, "I don't think we'll be readin' books written by cats.  I think we'll be readin' books written by peeps, mainly.  But they'll be books that cats - and peeps who love cats - like to read.  A lot of those cozies feature feline sleuths these days, you know.  Some of 'em have dogs but I've heard that cats and cozies are the perfect combination.  Cats are either reading 'em or in 'em or...  or...  or who knows?  Maybe some could be writing 'em, too."

"I'm just hoping," Nerissa quietly confided to his brother, "that our teacher is a cat or a peep.  I read that the course "How to Make Millions Trading Nip Futures" was bein' taught by a weasel.  Had it not been for that, I would have signed us up for that one, for sure.  I'll just have to figure out the nip markets on my own.  Shouldn't be too difficult.  Not nearly as difficult as the actual growin' of the nip."

Time flew by and before the boys knew it, their first day of school was over.  Both cats had copies of Leann Sweeney's latest book The Cat, the Vagabond and the Victim tucked into their book bags as their first assignment was to read it and write a book report.

They greeted Mr. Bernard as they wearily climbed into the school bus.  Seville tossed the driver another bone which was readily accepted.

"You've been grinnin' from ear-to-ear ever since our teacher gave us our book report assignment," Seville told his brother.  "Why are you so happy about homework?  What gives?" 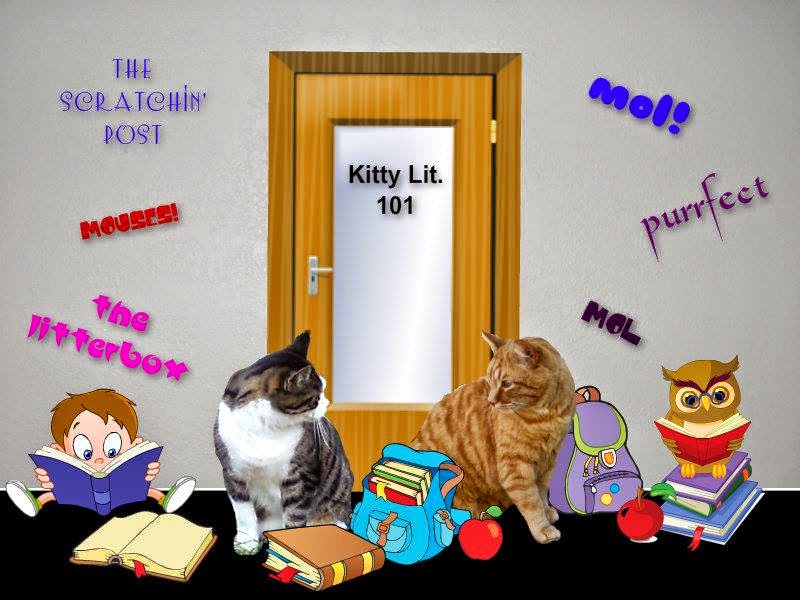 "Professor Lyon doesn't know it but I've already read the book he assigned," Nissy admitted.  "Yup, Leann and I are pals.  We know each other from Facebook. I've already read her book and it's great.  You're gonna love it, too."

"That's not fair!" sputtered Seville with indignation. "You have a head-start. You're probably gonna ace this class.  Ace it without even trying."

"Awww...  Don't worry, Sivvers.  I'll help you with the typin' and whatnot.  You'll ace the class, too," and with that, Nissy settled into his seat, looking forward to arriving home and telling the peeps all about his first day of school.

Posted by Seville at Nerissa's Life at 13:37