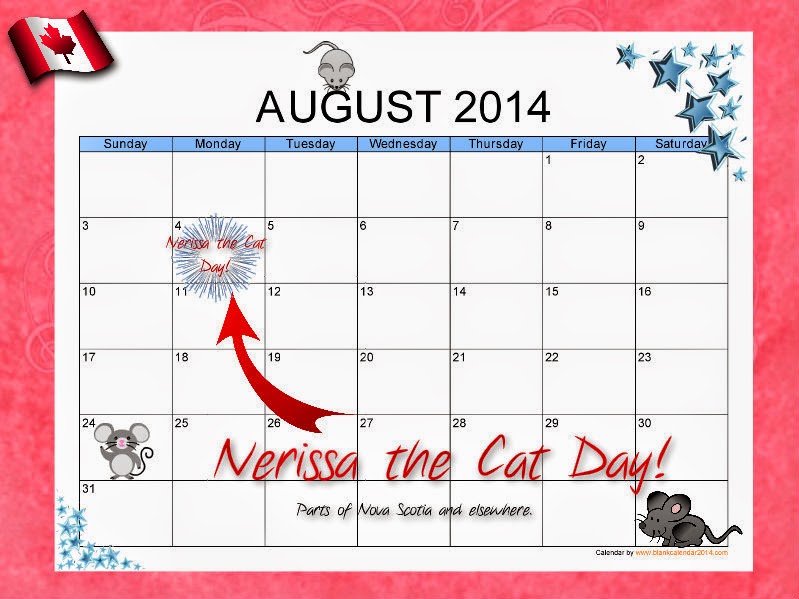 Do you know what day tomorrow is? Tomorrow is Nerissa the Cat Day. It's true.  I have my very own holiday now.

Well let me tell you somethin', when I'm appointed to the Canadian Senate, I'm gonna have to do somethin' about that.  In the meantime, we'll just assume it's a done deal, okay? Okay.  Glad we have that settled.

Anywho...  The first Monday of August is a holiday, givin' us a long weekend.  In fact, some people refer to it as the 'August Long Weekend.'  Kind of a silly name for a holiday, if you ask me, especially since it's not always in August.  Oh sure, the actual holiday Monday is in August but sometimes the weekend isn't.  For this year it is, but in years when the first Monday of August falls on the first or second of the month, the August Long Weekend seeps into July.  Seeps into July like a leaky pipe in a floodin' basement.  Are you beginnin' to see the problem at paw?  How can you call it the August Long Weekend when one or two thirds of it are sometimes in an entirely different month?  MOUSES!

In places where peeps, havin' recognised this all-too-obvious calendar seepage issue, don't want to call the holiday the August Long Weekend but don't have anythin' better to call it, it's known as the Civic Holiday.  Kind of just a general, run of the mill name, I guess.  Somethin' to call it for lack of a better somethin', I suppose.  Kind of blah, bleh and borin', in this cat's opinion, but maybe that's just me.

As the holiday is supposed to be about celebratin' the birthdays of the provinces, Nova Scotia and Prince Edward Island call it Natal Day.  Other provinces have given it names such as Saskatchewan Day, British Columbia Day and New Brunswick Day.  You know...  names celebratin' birthdays and provinces and whatnot. 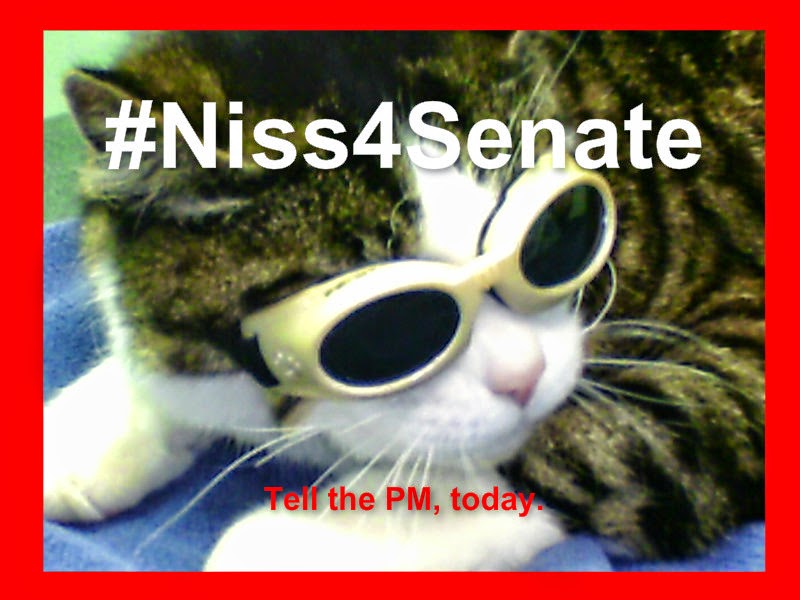 But truth be told, places call this holiday Monday all sorts of things. Now here is where it gets really confusin'.  In parts of Ontario, it's called the Civic Holiday but in Toronto, they call it Simcoe Day.  In Ottawa, Colonel By Day.  In Burlington, Joseph Brant Day.

I read somewhere that cities can call the day whatever they like.  What about towns?  What about villages?  How 'bout places so small they're really just dots on a map?

I, myself, live in one such dot on a map.  It's so small, we don't even have our own postal code. MOUSES!

Well let me tell you somethin', when I'm appointed to the Canadian Senate, I'm gonna have to do somethin' about that.

But back to the map.  It appears to me that cities are callin' the holiday Monday all sorts of things, generally namin' it after peeps who have made some sort of historical contribution to their cities which really, are just bigger dots on the very same map.  The size of the dots really shouldn't matter. If big dots get to name the day, little dots should get to, too.  You know?  Of course you do.

And why should those names be limited to peeps?  I mean...  WHY?  That's speciest, that is. It's speciest, for sure.

I think it's fair to say that I'm a fairly well-known cat livin' here in Nova Scotia.  Of course, there are other popular cats.  Stan...  Earl Grey...  The cats at Mickey's Musings...  All, very well known. Perhaps even better known than I.

But here in the valley, I don't know of a lot of other bloggin' kitties.  Actually, I don't know of any. Plus, there's my work with eggbeater-whisk teleportation-time travelling technology.  My brother Seville and I are leadin' experts in the field.  We're the leadin' experts in the whole wide world.  And then there's my possible - if not probable - Senate appointment.  Bein' the first feline Canadian Senator will be a pretty big deal, I should think. 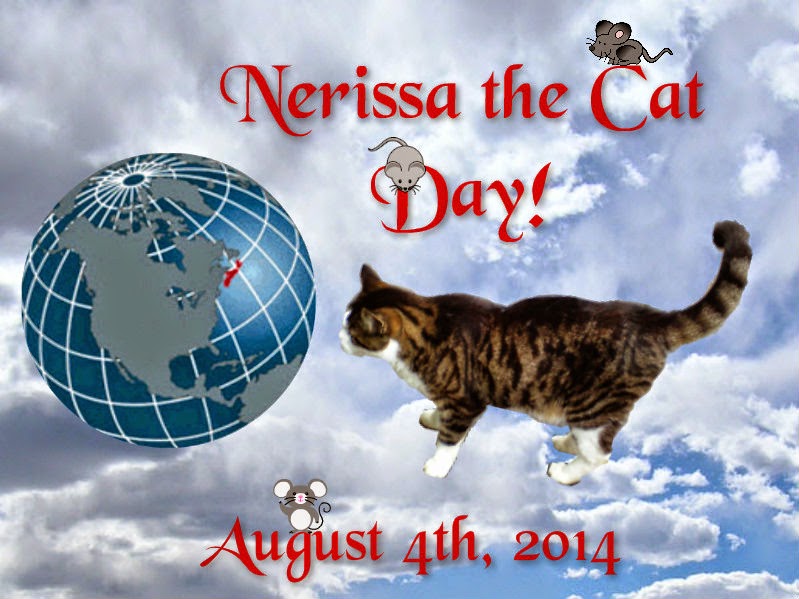 My gosh...  Having taken all of this into account, can you think of a better name for tomorrow?  I doubt it.  Nerissa the Cat Day is the best name ever, for sure.

So anywho...  At my house, the calendars all say that tomorrow is Nerissa the Cat Day.  Eventually, such calendars shall spread across this fair province, being found in every kitchen from Yarmouth to Cape Breton Island. And who knows, other provinces may pick up on the name, too.  Bet they will. Bet they won't be able to resist.  After all, could you?

Posted by Seville at Nerissa's Life at 15:02