You give a sister a job to do.  One little job.  One measly, teeny-tiny, little job and what happens? Nothin'.  Or everythin'.  It all depends upon how you're lookin' at it, I suppose.

I went outside the other day to use the loo.  Oh sure, we have indoor plumbin' and everythin' but every now and then a guy likes to use the great outdoors.  Be one with nature, so to speak.

I have this favourite little spot, just behind the crab apple tree Ol' Peepers planted at the edge of my primrose garden.  The tree is gettin' big enough now to give me a little privacy from pryin' eyes and the ground is nice and soft on account of the peep gardening in and about the area.  It really is the perfect spot for a loo.

So I went outside for a little bathroom break and headed on over to the crab apple tree.  I could immediately tell there was somethin' wrong.  Somethin' didn't look right.  Somethin' was amiss. "MOUSES!" I cried..  "Where's my loo?"

My sister, Mason, just happened to be walkin' past at that very moment.  I gave her the ol' stink eye before askin', "Mason, excuse me but...  WHERE'S THE LOO?"

"Do you mean that guy who moved in over on the other street?  I think his name might be Lou," she replied.  "Or maybe it was Larry..."

After a thorough interrogation of my sister, I had my answer.  The day before, when I had asked Mason to supervise the peep while she was gardenin' so that I could catch up on some nappin', Mason had apparently dropped the ball.  She had dropped the ball right into my loo.  In the soft, rich earth surrounding the crab apple tree, Mason had allowed Peep #1 to plant more primroses.  Mason had allowed Peep #1 to extend the primrose garden and infringe upon the area previously known as my loo.  What was a cat to do?

I stomped back inside the house to use the litter box, callin' behind me, "I have more questions for you, Mason.  You just wait right there.  I'll be back in a mo."

Clearly, Mason was not equipped for tasks such as the supervising of peeps.

A little while later, I ventured outdoors again to continue the interrogation of my sister.  I needed to know exactly what else the peep had been doin' while gardenin' without the necessary supervision.  The supervision Peep #1 so obviously required.

Mason pointed over to an area under some trees. "That's where she planted the sad poppies," she explained.

I looked at my sister, narrowing my eyes.  "The poppies were sad?  Were they half-dead or somethin'?"

"I don't know," answered Mason.  "The peep said they were blue so I assumed they must be sad.  At the time, I was grooming myself and not really paying a lot of attention to her."

I padded over to the newly dug bed and gave the plants a sniff.  They didn't look sad.  They didn't look blue, either.  Of course, they weren't blooming yet but everyone knows that the flowers of poppies are pink and red and yellow.  Even orange.  Even white.  Not blue.  I had never heard of blue poppies, before.

I headed inside to do some on-line research and what did I find?  There was such as thing as blue poppies.  Poppies that were blue.  Who knew?

And my gosh, were they ever beautiful.  I poured over picture after picture of the Himalayan blue poppies on the Internet.  Was the peep really growin' those?  Was she up to such a task?

Probably not.  Actually, definitely not.  Thinkin' about it further, I realised that the peep had, in fact, tried growing those plants before.  She had tried and she had failed.  Failed, miserably.  Failed like no one had ever failed in the history of peepkind.  She didn't get a letter F.  She didn't deserve a letter F.  She got a Z and that was if gradin' with leniency.

No way, no how, was Ol' Peepers gonna get those blue poppies to bloom. 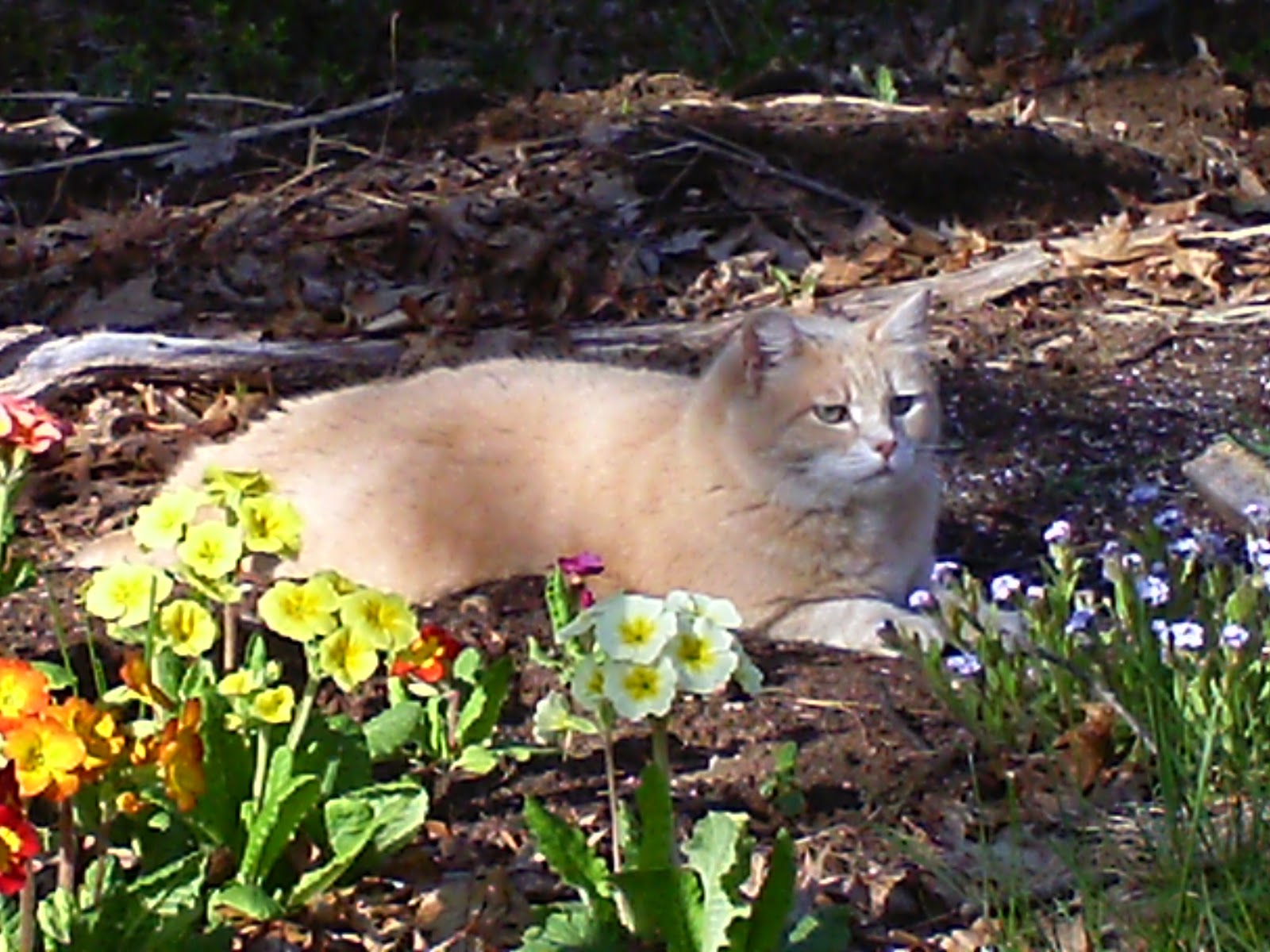 I bet I could help the peep with her blue poppies.  She has grown other kinds of poppies before.  Poppies that are easy to grow.  Shirley poppies and Icelandic poppies and whatnot.  Maybe if she were to grow some of those other poppies, I could...

Next year, when other, easy-to-grow poppies are bloomin' away in the garden, I'll sneak out in the dead of night, and paint those poppies, blue.  The peep'll never know the difference.  I'll paint 'em really well.  It'll make her day.  Paintin' poppies.  That is EXACTLY what I shall do.  MOUSES!

Only two days left!  Votin' for the Petties is still goin' on but will end at midnight, PST, on Thursday August 7th.  You can still vote today and tomorrow.  Won't you please vote for me?  I'd really appreciate it a lot.  purrs

Posted by Seville at Nerissa's Life at 16:48