Whatever you do, don't feed 'em.  DO NOT FEED THE TROLLS.  They'll only come back for more and some of 'em will try to eat you alive.  MOUSES!

Yup, it's true.  Feed a troll, he hungers for more.  Starve a troll and he'll mosey on along.  Or maybe he'll just wither away and die from starvation.  Either way, I'm good with it.

Bein' an Internet savvy and internationally renowned social-media mogul such as myself...

Okay, scratch that.  Bein' a cat with a Twitter account and a Facebook page, I have some experience with trolls and let me tell you somethin', I do not suffer trolls gladly.  MOUSES!

Much of the despicableness of that which is the troll stems from their diet which is comprised mainly of metal, wood and rocks along with an occasional Tweeter.  This incredibly unhealthy diet gives trolls a case of constant indigestion and chronic constipation.  It's quite uncomfortable, to be sure.

But don't pity the trolls because of this painful affliction.  A few more raw veggies and a few less Tweeters and their indigestion would subside.  To get rid of the constipation, I think they'll have to stop eatin' rocks.  MOUSES!

With all the burpin' and passin' of gas 'caused by their diet rich in rocks and Tweeters, you'd think you could see a troll from a mile away.  Smell him, at least.  But oddly enough, trolls are masters of disguise.  They're masters at insinuating themselves into the lives of tweetin' cats, dogs and peeps. They quietly lurk in the background, waitin' for their chance to pounce and when they see it, they seize the opportunity before them.  The next thing you know, they're tweetin' tweets designed intentionally to harm others and cause discord.  They wanna cause arguments.  They wanna cause arguments just to argue.  It's the very nature of the troll.

Yes, trolls are nasty, argumentative monsters by nature.  They like to stick their sticky fingers into the pot, stir it up and then sit back and watch.  And the moment the arguing stops, the trolls are right back in there, stirrin' the pot up some more.

You see, trolls can't exist in a world where they are ignored.   They feed upon the responses of their victims.  When you ignore them, their food supply is cut off.  They have to move on or starve.  Either way, you won't have to deal with them ever again.  BLOCK.  REPORT.  IGNORE.  It's as simple as that. 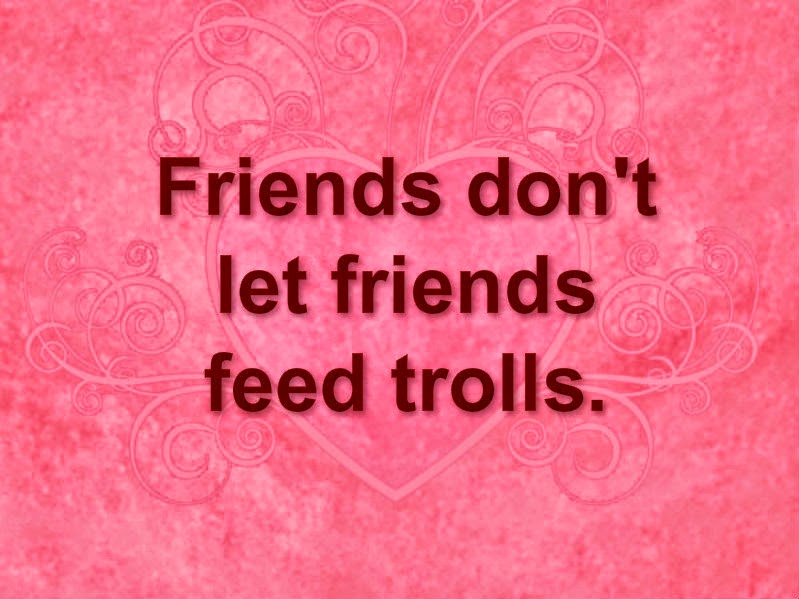 I know...  I know...  It doesn't always seem that easy but really, this technique works wonders with your typical, ordinary troll.

We haven't yet discussed the subset of trolls that have forayed into the realm of criminal activity.  Whether it's cyber-bullying or cyber-stalking, it is a crime.

This subset of trolls goes beyond the normal troll-like behaviour of lurking and waiting to pounce.  These trolls victimise specific people.  They attack them both directly and indirectly. They'll seek out the family and friends of the their victims, spreading vicious rumours and lies.  They're nasty, bullying monsters who set out each mornin' to harm the innocents of the Internet and they're as mean as mean can be.  They're a menace to society.

How do they choose their victims?  As I'm not a troll myself nor have I - THANKFULLY - ever been inside the head of a troll, I can't say for certain however, I suspect that trolls detect a certain vulnerability in their victims.  That vulnerability could be as simple as the victim bein' a nice person. Unfortunately, it gives it gives the trolls easy access.

And of course, if the victim of a bullying or stalking troll should happen to respond to said troll, the troll will feed upon that response, growing stronger and stronger as the victim weakens.

This is why it is ever-so-important that we ignore the trolls of the Internet.  By ignoring them, we starve them to death.  By responding, we feed them.  Please, if you see friends bein' bothered by trolls, strongly encourage them to ignore those dastardly, burpin', constipated, trollin' creatures. FRIENDS DON'T LET FRIENDS FEED TROLLS.  It's a fact, for sure.

Of course, when one is dealing with this particularly nasty subset of cyber-bullying and stalking trolls, one must remember that the trolls are participating in a criminal activity.  So don't just report 'em to Facebook or Twitter.  Report 'em to the police, too.  Many police forces now have special cyber-crime units.  If you're a victim of a cyber-crime, you need to let the police know, for sure.

I have to say, when I see someone on Twitter or Facebook exhibiting troll-like behaviour, I block 'em as quickly as my little paws can type.  I block 'em in record speed.  I can block and report a troll in under three seconds.  I've had a bit of practise, you see.

And here on my blog, I don't see many trolls.  Actually, I don't see any at all which is a good thing, I think.

I meet a lot of spammers but spammers aren't really trolls.  Spammers are just peeps who eat a lot of processed meat that comes in cans.  Funny thing about those spammers...  Their mamas all gave them the very same name - Anonymous - and they all wanna sell me stuff.  Usually shoes, handbags and little pills that no self-respectin' cat who has been neutered, such as I, would ever require.  And as I don't wear shoes, I don't want those, either.  MOUSES!

Posted by Seville at Nerissa's Life at 15:22