of buses and tours and whatnot 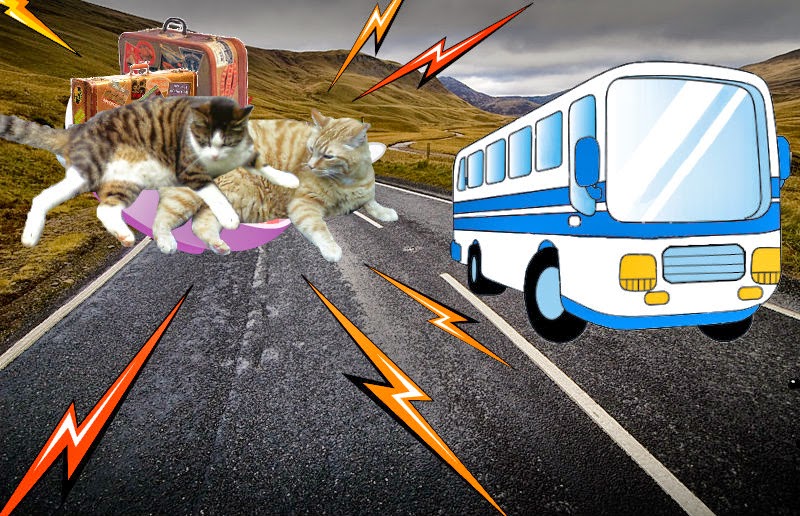 "HANG ON!" cried Seville. "I'll get you on that bus on time.  Don't you worry about anything.  Just hang on with all your might.  We're gonna have to match our speed with the tour bus.  Once I'm alongside it, you jump onto the bus.  Got it?"

"What I've got," sighed Nissy, "is a marmie brother who doesn't know the difference between a bus tour and a writing tour.  MOUSES!"

"Seville, turn this flyin' fryin' pan back this instant and take me home," Nissy demanded.  "I've gotta get on-line and work on my blog post.  You know, my writing tour blog post?  The post needs to go up today and if you don't take me home immediately, it's gonna be late."

"So you mean that you don't need me to get you onto that tour bus?  But I thought..."

"But what about the packed suitcases?  Why pack your suitcases if you're not goin' on a bus tour?" Seville asked.

"I didn't pack any suitcases, Sivvers.  In fact, those suitcases don't even belong to me.  Don't know where you got 'em but I suggest you return them as soon as you return me to my office so that I can write today's blog post.  Come on Sivvers...  TAKE ME HOME!  I'm gonna be late."

Reluctantly, Seville turned the teleportation device back in the direction of home, all the while muttering to himself something about packed suitcases and trying to remember exactly where he had found them in the first place.

You all know my pal Speedy, right?  Speedy who writes the amazin' blog, Speedy the Cheeky House Bunny?  Of course you know him.  I think everybody does.

Well about a week ago, Speedy asked me it I'd like to participate in this #mywritingprocesstour thingamajig and I immediately said yes.  I thought it sounded like fun.  Little did I know 'bout my brother Seville's fixation with tour buses and gettin' me on one.  MOUSES!

Now for the #writingprocesstour, I'm supposed to link back to Speedy's blog 'cause he invited me. I've done that up above.  Just click on his blog's name and you'll be transported over to his writing process post.  No flyin' fryin' pans, required.  Then I need to answer three questions and finally, invite three more bloggin' pals to join the tour.

Question number one is, what am I workin' on?  What am I not workin' on, is more like it.

Hmmm...  Of course, I'm always workin' on developing new and innovative eggbeater-whisk time travelling-teleportation technology.  My brother, Seville, and I are leading experts in the field, you know.  I'm also busy perfecting my recipe for mulled nip cider.  As a true connoisseur of nip, I'm tryin' to develop the perfect blend of herbs and spices to accentuate the nippiness of the nip.  Haven't quite got it yet but I will.  Like I said, I'm workin' on it.

Oh.  You mean workin' on as it pertains to my writing.  MOUSES!  Sorry 'bout that.

Well...  I'm workin' on my blog. Publishin' twice a week, every week, keeps me pretty busy, writin' wise, especially when you take into account certain distractions such as... SEVILLE.

And speakin' of distractions, there's the peep.  Peep #1 is workin' on a little cosy mystery series featuring two characters she came up with for a couple of short stories that were published long ago, in ancient times, by a certain woman's magazine.  She's always tryin' to use the computer when I need it for my blog.  Like I said, the woman is a distraction.

Peep #1 also has a blog of her own called The Peep's Cheeps but she hardly ever updates it.  She's not consistent with her blog like I am with mine.  MOUSES!

The second question is, why do I write what I do?  But what else would I write?

I believe that every cat out there has a story and that that story needs to be written.  Stuff happens to cats, all the time, and peeps out there wanna read about it.

For example, take the story of my rescue.  Later this year, it's gonna appear in the book, Rescue Me:  The Stories of 12 Cats, Through Their Eyes, published by FitCat Publishing.  Like every rescue story, mine is poignant and touching and as luck would have it, it comes complete with a happy endin'.  Gotta love happy endings.  Peeps like reading 'bout stuff like that, I think.

I also like to write about fun stuff.  I enjoy makin' my readers smile.  Bringing a smile to someone's face is a beautiful thing and I try to do that in as many posts as I can.

You won't find Peep #1 writing about her life story.  It would be way too borin'.  Might pass as some sort of non-prescription sleepin' aid though.  MOUSES!

But Peep #1 and I do agree on the bringin' a smile to people's faces bit.  She and I both like to write stuff that's entertaining and will bring joy into the lives of our pals.  Sounds like a good thing upon which to agree.

The last question needin' answering is, how does my writing process work?  That's an interestin' question for which I don't really have a very interestin' answer.

Personally, I just write.  I don't have a real process.  I just sit down at the computer and write.  For the most part, I write as if I'm chattin' with my pals.  I guess that's why I have sort of a colloquial style.  Peep #1 has never mastered the art of colloquial styling.  For goodness sake, I had to explain to her what colloquial meant in the first place.  MOUSES!

As far as comin' up with ideas and stuff, the ideas just sort of appear.  We cats are very observant creatures, you see. There are ideas floatin' around all over the place.  Just gotta see 'em and recognise that they can be turned into topics for writing.

For example, I heard on the news that the Canadian Senate is short a whole bunch of Senators 'cause the Prime Minister has not yet appointed them and I thought to myself...  I COULD DO THAT!  Thus, my blog post about why the Prime Minister should appoint me to the Senate.  Or like when I brought that chipmunk into the house a few weeks ago.  You should have seen the peep runnin' about, tryin' to catch the chippy.  It was hilarious!  I had to write about that.  Or quite often I'll spot the peeps doin' something silly.  They do silly stuff all the time.  Especially Peep #1.  You'd think her middle name was Silly or somethin' and she felt the undyin' need to live up to it on a regular basis.  Let's just say that my peeps provide me with a multitude of humorous blog topics on account of their propensity to do stupid stuff and leave it at that.

As far as the peep's writing process goes, I haven't got a clue.  I kind of think she just makes stuff up or somethin'.  MOUSES!

And now it's time for me to pass this writing tour onto three more bloggers.  Funny thing 'bout that. Uh...  I could only find two.  I asked eight but only two agreed however they're two fantastic bloggers with AMAZIN' blogs so by the very nature of their WONDERFULNESS, I'm gonna count 'em as bein' three.  Kitty math.  Don't attempt it at home unless, of course, you're a cat.

I'd like to invite to this here writing tour my wonderful pals over at the Dash Kitten blog.  Their staff is comprised of one peep and several cats and they write on an assortment of topics.  Sometimes their posts are really serious and other times they're a whole lot of fun but no matter what, you're bound to learn something new either about cats or New Zealand or just life, in general.

I'm also invitin' on the tour my pal Brian over at the Brian's Home blog.  Brian lives in a multi-cat household and quite often he'll feature one of his fur-sibs in his posts.  And they always have great pictures!  Brian and his family are experts in doin' the easy which is readily evident by lookin' at all the beautiful pictures.  What's more, Brian has another blog that's up for a Pettie Award, just like mine.  NICE.

So that's my writing process tour post.  Hope you enjoyed it.  Now that it's done, I'm gonna go check on whether or not Seville has figured out where he found those two suitcases and try to return 'em to their rightful owner.

Posted by Seville at Nerissa's Life at 13:44