must be a girl thing

What's with all the nose kisses?

I'm not into nose kisses, myself.  Oh sure, like the peep says, I have a cute little button nose and all but I don't go 'round kissin' everybody with it!  My sister, Constance, on the other paw...

For the last few months, Connie has been kissin' up to the peep, BIG time.

At first, that's exactly what I thought she was doin'...  kissin' up.  I had noticed how she had put on a few extra ounces so I was pretty sure she was gettin' extra treats and whatnot.  I figured she must have been kissin' up to Peep #1 with all those nose kisses and gettin' more than her fair share of the treats.  The first peep is a real sucker for that kind of thing.  MOUSES!

But the fact remained that Constance continued to constantly give the peep nose kisses.

When Peep #1 picks me up, I stay in her arms for as long as there are chin tickles and behind-the-ear scritches on the go.  Once the peep has tired of givin' me scritches, I get all squirmy.  I squirm and I worm until she puts be back down onto the floor.  I never - and I repeat, NEVER - reach out and kiss her on the nose with mine.  NEVER.  I'm just not into that kind of thing.

Constance, on the other paw, can't seem to help herself.  Peep #1 picks her up and the first thing she's doin' is tappin' her nose up against the peep's.  MOUSES!

And it doesn't stop there.  Connie has taken to sleepin' right up by Peep #1's face.  THEY USE THE SAME PILLOW!  Never seen the like of it, myself.  I, Nerissa the Cat, would never do such a thing. Might get peep cooties or somethin', doin' stuff like that.  But not Connie...  Connie gets right up there and the next thing you know, she's givin' the peep nose kisses over and over and over again until finally, Peep #1 tells her to stop it 'cause it's keepin' the peep awake.

I know.  I've watched from a distance.  A safe distance, mind you.  Don't want any of those peep cooties comin' my way.

So again I ask...  WHAT'S WITH ALL THE NOSE KISSES?

Turns out, it's all the peep's fault.  Of course. 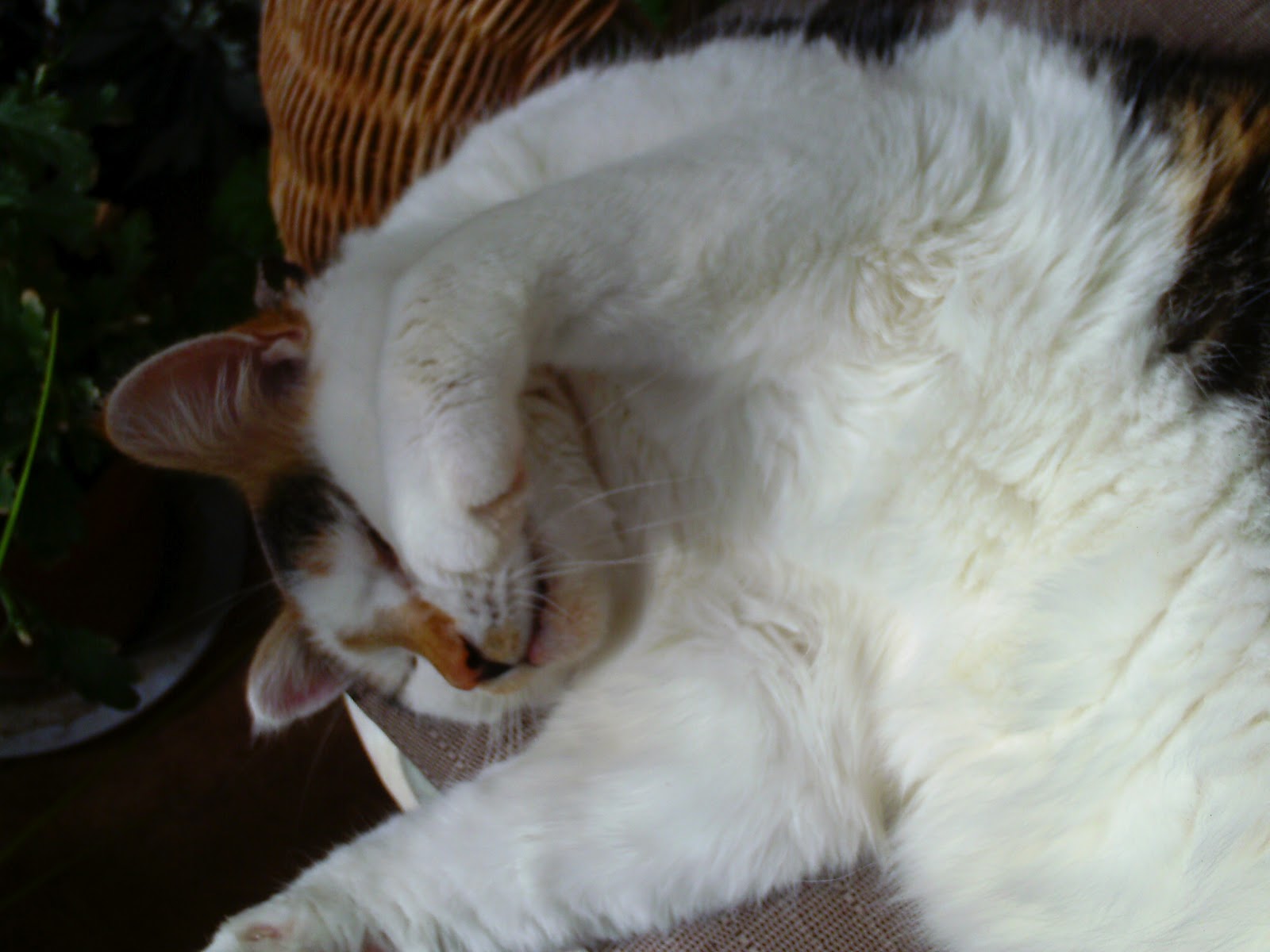 A few months ago, Peep #1 decided to switch up her facial routine.  Bein' a cat, I wash my face with spit and polish but peeps don't do that.  Peeps use cleansers and creams and whatnot. Silly peeps.

I think the peeps think that by usin' such things, they won't look their age of somethin'.  Considerin' the fact that Peep #1 is as old as the hills - in other words, ancient - her use of facial cream might very well be necessary although truth be told, she's gonna need more than that to knock off a few millenia.

Anywho...  a few months ago, the first peep started usin' this new kind of cream on her face.  It smells all flowery and whatnot.  Smells like jasmine.

Now don't get me wrong.  Nothin' wrong with the smell of jasmine.  It's no nip, mind you, but still nice enough.  Not nice enough to make me wanna do nose kisses but nice enough, I guess.

Now if it were nip...  Well then.  Well then that would be a totally different story.  But it doesn't smell like nip so it's just the same ol' story and that story isn't worth riskin' bein' contaminated by cooties by kissin' the noses of peeps.  End of story.

She says the cream smells especially nice.  She says it smells yummy.

I say, THAT'S THE WRONG KIND OF CREAM, CONNIE!  You want cream?  Go get yourself some cream from the fridge.  Pour a little whippin' cream into a bowl.  Proper cream comes from cartons stored in the fridge.  Its does not - and I repeat, NOT - come from jars next to the bathroom sink.

But Connie just won't listen to me.  She says she's really into this jasmine stuff.  Could you believe it?  I know.  It's really kind of unbelievable.  She's so into this jasmine cream that she can't seem to help herself.  It's not that she wants to go 'round kissin' the peep on the nose.  She just wants to smell the jasmine.

I can easily - and I repeat, EASILY - resist the lure of the jasmine cream but what if the peep were to...  Oh my gosh...  MOUSES!

Probably not.  You all know how I am around nip.  MOUSES!

So I'm thinkin' that I should start encouraging the peep to go out and buy more of this jasmine-scented facial cream.  I should encourage her to buy it by the case so that she has a lifetime supply of the stuff.  The more of the jasmine cream she has to use, the less likely she will be to start smearin' tuna and catnip all over her face.  'Cause truth me told, even I, Nerissa the Cat, would never be able to resist that.  MOUSES!

Posted by Seville at Nerissa's Life at 12:59