Let me start at the beginnin'.

It was like magic.  That's right... MAGIC.  In the blink of an eye, Rushton had disappeared like magic.

Well maybe he didn't disappear in the blink of an eye.  Peeps don't actually know how long it took Rushy to do his little vanishin' act as they weren't watchin' him at the time but he still disappeared like magic.

Let me explain.  The peeps were lookin' for Rushton.  Don't know why they were lookin' for him but I'm assumin' they had a reason.  There must have been a reason.  They usually do have reasons. Not necessarily good reasons but reasons, nonetheless.  But in all the excitement of Rushy's new magic trick, any reasons - good or bad - were forgotten.

Peep #1 kept goin' back into the livin' room 'cause truth be told, she was sure she had seen Rushton in there, earlier in the day.  She was positive.  But he wasn't behind the couch or chairs.  He wasn't under the table or on any of the dining room chairs.  He wasn't anywhere to be found.

But you see, the doors to the livin' room were shut.  Had he been in there earlier, he couldn't have gotten out.  And Peep #1 was sure he had been in there earlier so it only made sense to her that he still was.  She'd go out and look somewhere else but she repeatedly returned to that room, positive that he must be there. 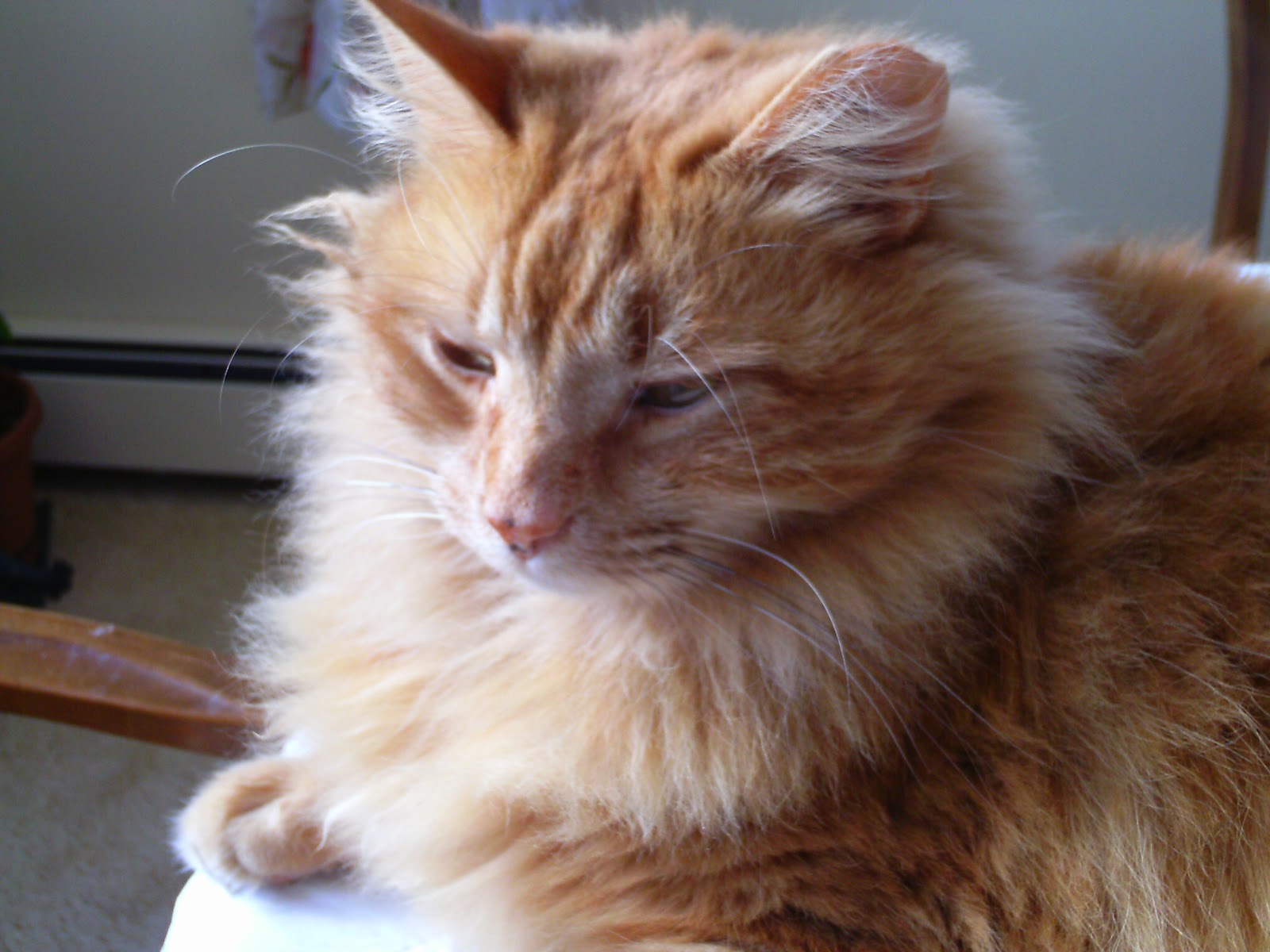 Peep #1 called to Rushy numerous times.  I know.  I heard. No one answered.  Could Rushy not hear her or was he simply ignorin' her.  When it comes to cats, either is possible although truth be told, the latter is more likely than the former.  MOUSES!

Eventually, the peeps gave up on findin' Rushton.  Peep #1 plunked herself down on the couch in the livin' room, hopin' and prayin' that Rushy was okay, wherever he was.  By this time, the reason for searchin' for him was long forgotten and even the belief that he had ever been in the living room was bein' questioned.

Then it happened.  Peep #1 watched as Rushton slowly emerged from inside the chair.  MOUSES!

Yes, he emerged from inside the chair.  The big, light green chair.  Not from underneath but rather, from INSIDE.

Of course, when I found out about Rushy's secret hidin' spot, I immediately had to check it out for myself.  Crawling in under the big, light green chair, I pushed my head into the inner workings of it.

Rushton had managed to tear a whole in the black netting underneath the chair and burrow his way into the chair, itself.  Since most of the netting still remained, he was able to curl up on it, like it was a hammock.  NICE.  The space was small enough to feel cosy and secure but at the same time, there was enough room to really stretch out in, if so desired.  VERY NICE, indeed.

I thought to myself, I have got to get a hidey-hole like this!

Lookin' around the room, I quickly realised that none of the other chairs would be suitable for creatin' such an amazin' hidey-hole but...  but there was the couch.  The couch would make an excellent hidey-hole, for sure.

I padded over to the couch.  Hmmm...  Yup, yup...  Uh-huh...  Hmmm...  Just as I thought.  The couch would work.  I could do a similar tearin' of the black netting to access the inner recesses of the couch.  In fact, the couch was big enough that I could create two points of entry.  Then on one side, I could have a little restin' spot like the one Rushy had in his chair and on the other side, I could create a little guest room or better yet, a spot for entertainin'.  Yes!  No reason why I couldn't invite a brother or sister into my couch-house where we could chat about world events and whatnot. Share a laugh or two over whatever stupid things the peeps had done that day, without bein' overheard by said peeps.

My couch-house could be like a private clubhouse.  NO PEEPS ALLOWED.  Not that they'd fit even if they tried.

Of course, if I was gonna be entertainin' in my couch-house, I was gonna have to do a little decorating.  A nip mouse here and there, scattered like pillows.  Perhaps I could get the peep to knit me up a few in various shades of green and cream to co-ordinate with the soft green of the couch. Maybe a couple other nip toys, as well.  No room really for wand toys in there.  Besides, wand toys require interaction with peeps and like I said, in my secret couch-house there would be NO PEEPS ALLOWED.  Not that they'd fit even if they were.

And snacks!  I'd have to set up a little corner with some treats and whatnot.  A few bags of treats and perhaps a saucer or two for cream.  Oohhhh...  and if I could find a source of nip beer, that would definitely be somethin' I'd like to have on offer.  Nothin' like havin' company over for a few laughs over a nip beer or two.  Or three...

But then I realised that Rushy had been enjoyin' the privacy of his little bachelor pad for who knows how long without the peep knowin' a thing about it.  Not even I, Nerissa the Cat, had known about it and honestly, I usually do know about such things.  And to this day, none of us would have known anythin' about it had Rushy not made the mistake of exiting the chair while Peep #1 was in the room.

Well, I simply wouldn't make such a silly mistake as that.  I, Nerissa the Cat, would never make such an error in judgement.  And as I was plannin' on creating two points of access for my secret couch-house, I would make sure that at least one of these access points was hidden from the pryin' eyes of the peeps  As long as the peeps were unaware of my secret plans for buildin' my secret meetin' place, I wouldn't get into trouble.  MOUSES!

I'm currently in the plannin' stages of creatin' my secret couch-house, clubhouse.  I'm still decidin' exactly where I'll rip into the black nettin'. I also need to figure out which part of the space will be allocated for restin' and which part for entertainin'.  After all that's done, I'll start aquirin' the necessary nip toys and whatnot to create a nice homey atmosphere.  Then I'll need to find some nip beer.

Of course, the peeps would be breathin' down the back of my neck if they knew what I was plannin'.  Judgin' from the words the first peep said to Rushy about the chair, the words she'd be sayin' to me would not be of the overly friendly sort.  The peeps would be climbin' right up into my couch-house, breathin' down my back and sayin' words not fit to be uttered in the presence of a cat like me.  Well, that's what they'd be tryin' to do except, of course, in my couch-house there will be NO PEEPS ALLOWED. Not that they'd fit even if they knew.