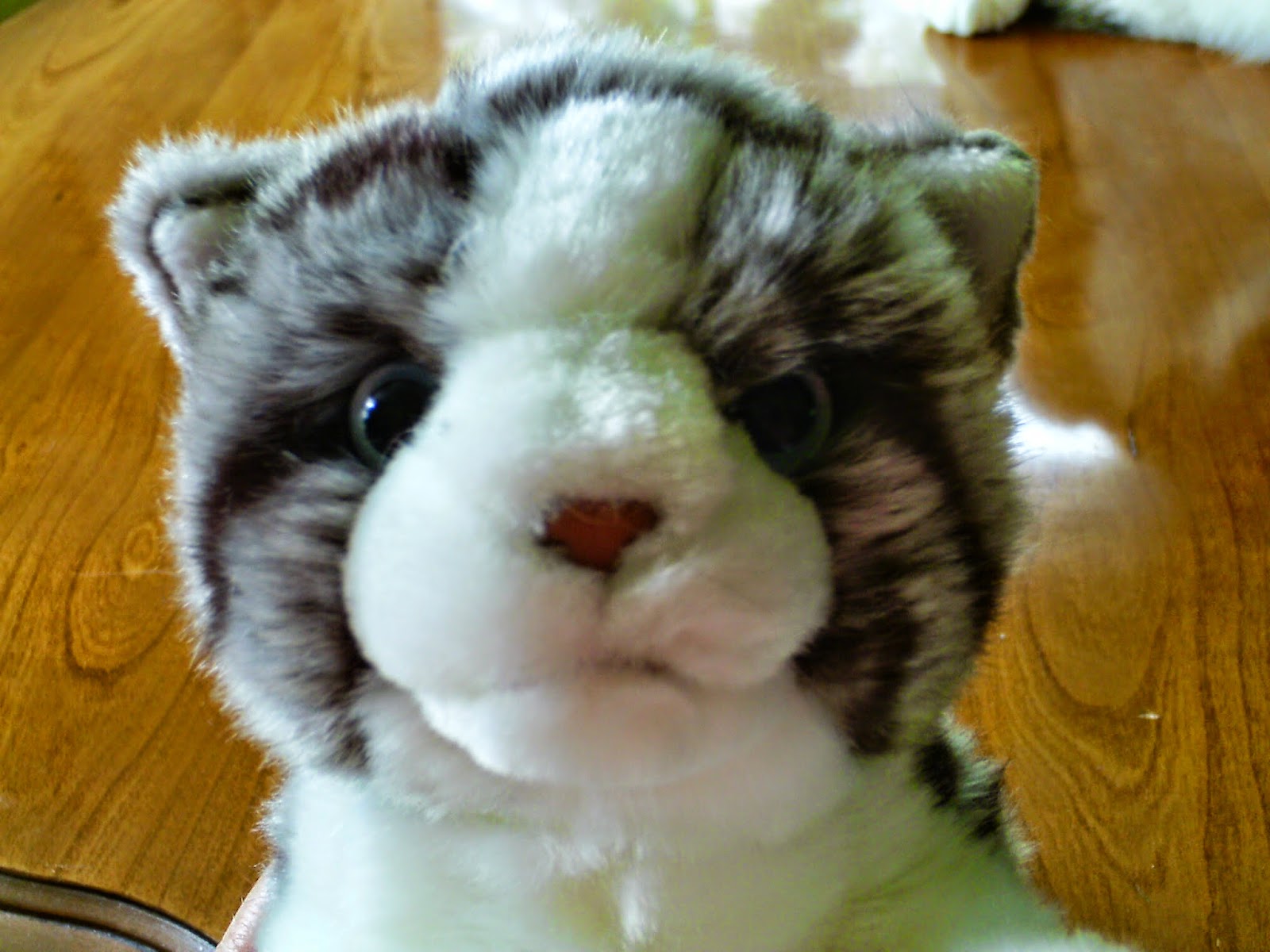 So as you can imagine, I was in a bit of quandary a couple of weeks ago when Peep #1 said she was gonna go to Lunenburg for the day.  Would I like to go with her, the peep asked.  In response, I immediately checked out whether or not I had a peep-sized fryin' pan for teleporting in stock but found none.  To be honest, I don't even know if they make 'em sized for peeps.  MOUSES!

Clearly, the peep was plannin' on driving to Lunenburg in the car so my travelling with her was out of the question.  But I remembered reading somewhere that the Town of Lunenburg was a UNESCO World Heritage Site with a rich history steeped in shipbuilding and fishing and whatnot.   Fishing. Yet another reason for teleportin' using a frying pan, if you ask me.  I mean, how else should one cook the fish?

I had fish on the brain and gettin' a fresh supply of the stuff was the perfect thing to do while visitin' Lunenburg.  But how could I travel with the peep if the peep was takin' the car?

Then I got to thinking.  Plush Nissy doesn't mind the car.  I could send the plush me out on assignment.  BRILLIANT. 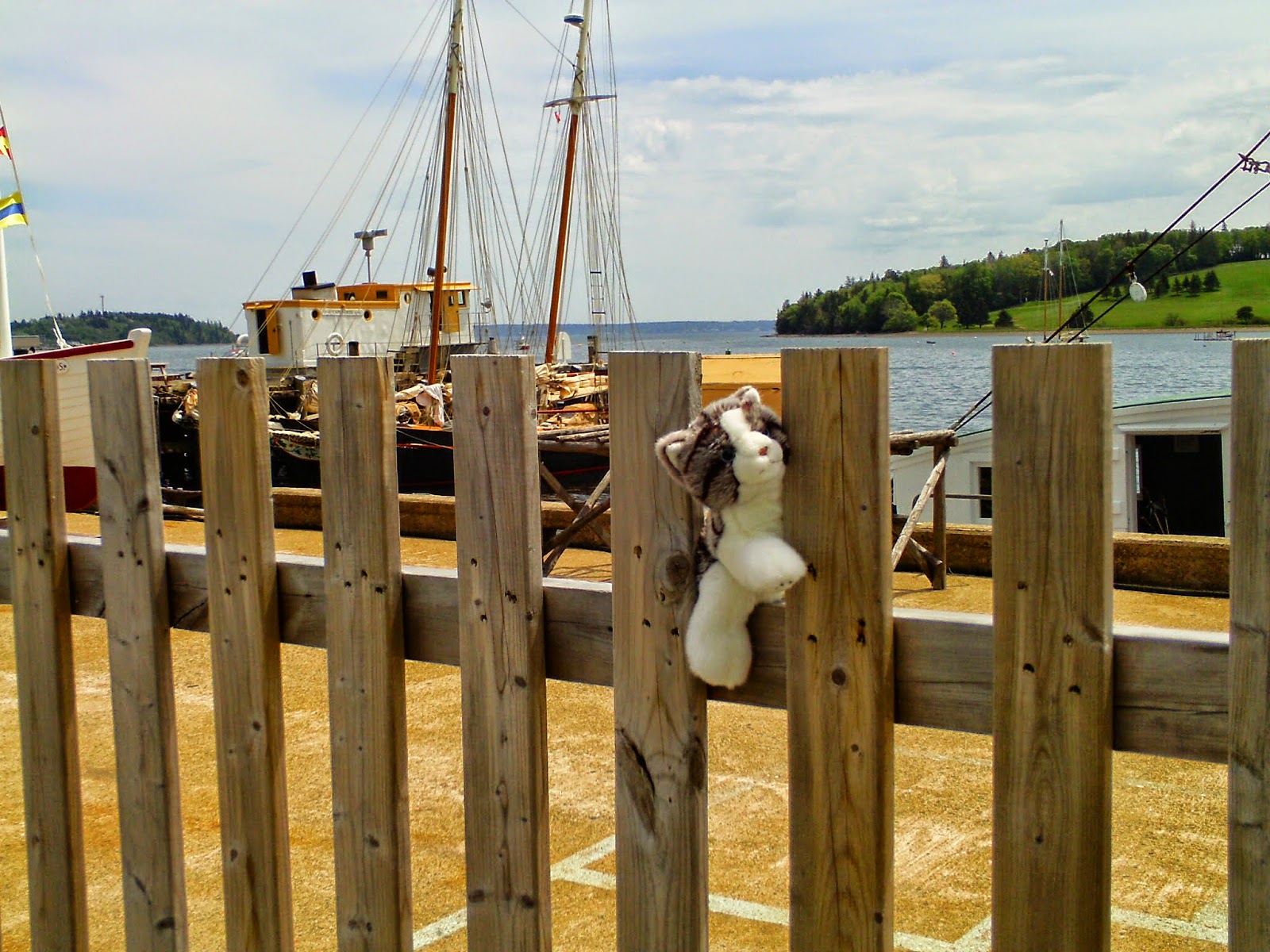 So I packed up a bag of snacks for the plush me and tossed in some nip before sending him off on his adventure with the peeps.  I handed him a cellphone so that we could communicate with one another and gave him strict instructions to stay in close contact with me.

Although mere seconds if one teleports, Lunenburg is a couple of hours away by car.  Plush Nissy spent most of that time nappin' and arrived in the Town of Lunenburg quite refreshed and ready for some fun along with his procurement of the aforementioned fish.

Once there, the peeps and the plush me headed toward the water.  It didn't take them long to find the wharf where there were lots of boats and whatnot.  Peep #1 parked the car so that she, the second peep and the plush me could head out on paw.

Plush Nissy was ready to sniff out some fish.  He sniffed and he sniffed but try as he might, his sniffer wasn't detectin' any fish.  Could it possibly be that there were no fish to be found in the Town of Lunenburg?  MOUSES!

I was beginnin' to think that the plush me had a defective sniffer when he cried out, "FISHES!" 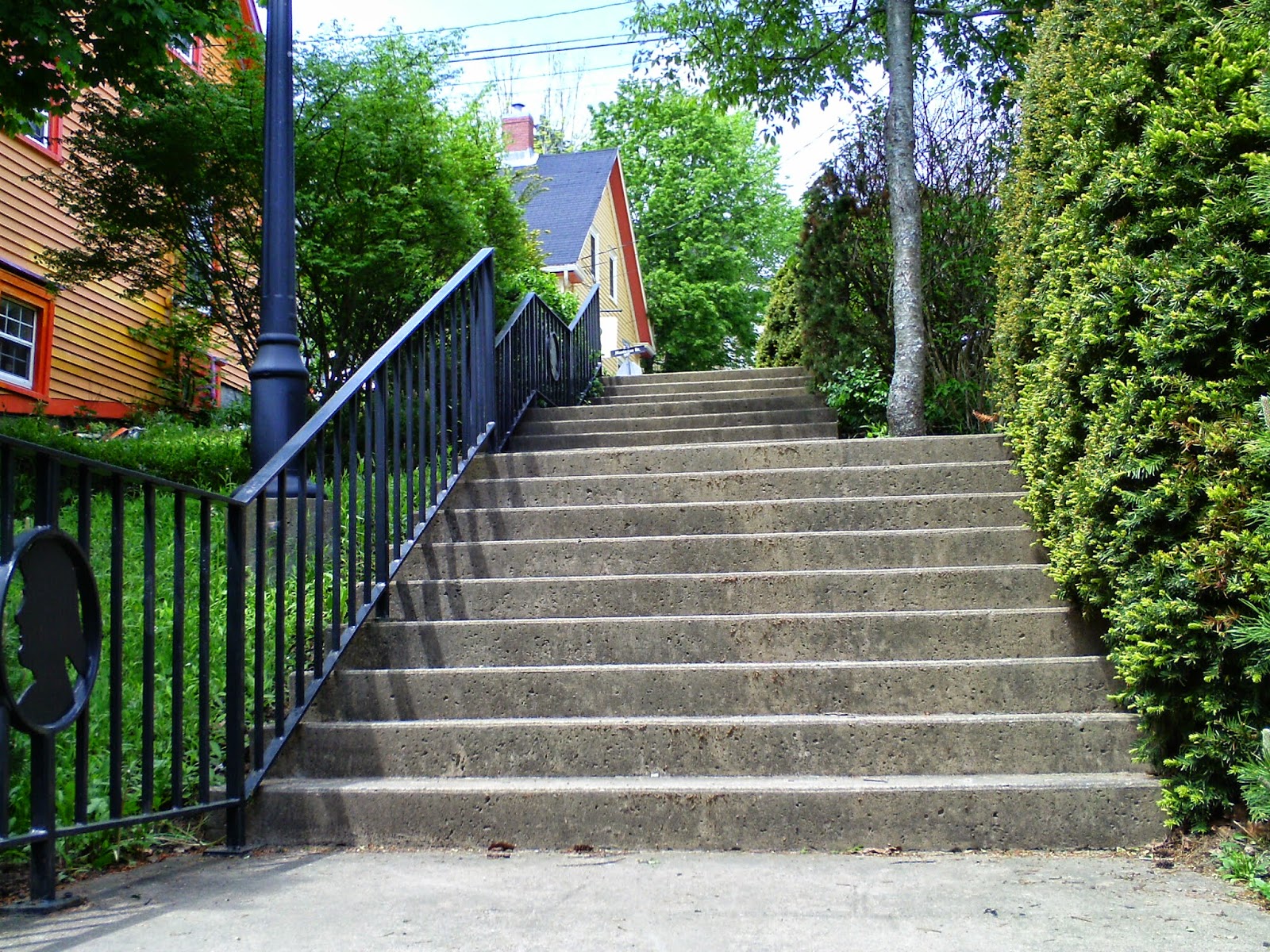 Hot on the trail, he led the peeps up an outdoor staircase. At the top of those steps, Plush Nissy headed down a road in search of the fish.  On this higher street stood a large number of restaurants, many of which were servin' fish and other forms of seafood.  No doubt, those appetising aromas were what the plush me had smelled.  The restaurants' patrons were all inside, chowin' down on the delicious fish dishes set before them and just as Plush Nissy was about to order up some grub, Peep #1 swooped down and scooped him up into her arms, sayin' something about headin' back to the car.  MOUSES!

But at that very moment, just as the plush me was about to give up all hope of completing his assignment of procuring the fish, he spotted several buckets filled with fresh fish on ice.  Those buckets were sittin' on a wheeled dolly of some sort and a plan was hatched right there on the spot. Plush Nissy struggled in the peep's arms, squirming and worming until he was free, allowing him to scamper over to the dolly.

After unlockin' the brakes, the plush me stepped away from the dolly and made a flyin' leap onto it, attempting to use his body weight to propel the dolly forward.  But as it turned out, the plush me doesn't actually have a lot of body weight and the dolly didn't budge so he called over to an unsuspecting tourist and asked him to give the dolly a shove.  Could he haul it onto the street and give it a shove in the direction of the ocean two streets below, Plush Nissy asked.  Being unsuspecting, the tourist must have thought this was all part of the Lunenburg experience and gladly obliged. 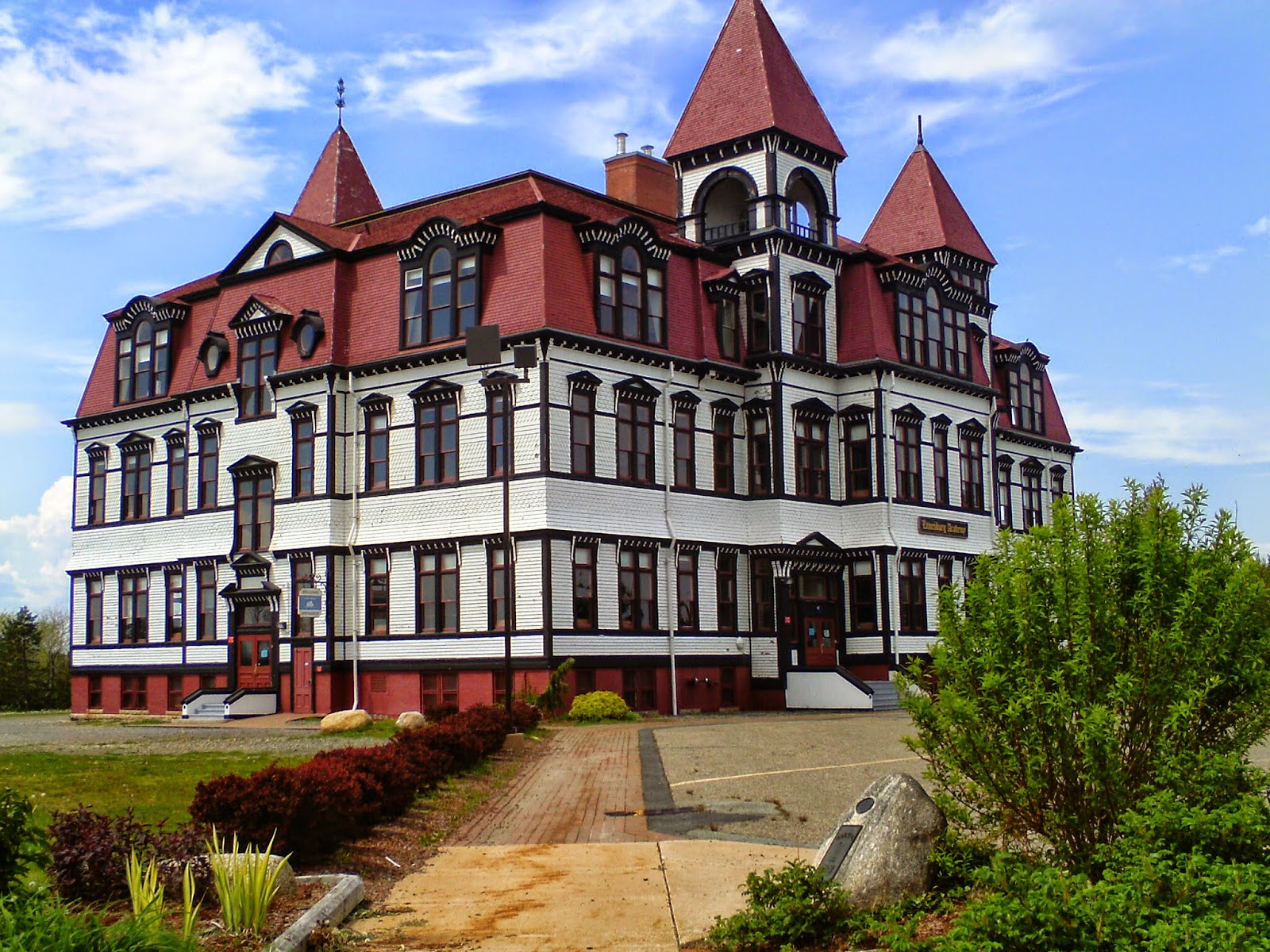 The dolly began to move ever-so-slightly.  It was slow goin' at first but as soon as it hit hilly ground, it began to pick up speed.  The plush me steered the dolly down the outdoor staircase - bumpity-bumpity-bump all the way - and made a sharp turn at the bottom, headin' in the direction of the parked car.  Eventually, the dolly came to stop just a few feet away from the car and the plush me sat there, triumphant, waiting for the peeps to catch up.

Peep #1 was in the lead with Peep #2 close behind.  They came running towards the car with their arms flailing about as they were yellin' "Stop!  STOP!  STOP!" at the plush me.  Silly, when you think about it as by this point, the dolly had already come to a full stop.  Did I mention that Plush Nissy was waitin' for 'em to catch up?

Huffin' and puffin', Peep #1 arrived at the car and stared down at the plush me.  "Hand over that phone," she demanded, thrusting out her paw.  "Nissy!" she cried.  "What kind of trouble have you got the plush you into now?"

"Just toss the fish in the car and head on home," I instructed the peep.  "You're in too deep now to return 'em and just leavin' them there in the sun would be such a waste."  Realising I was right, the peep obeyed my instructions. 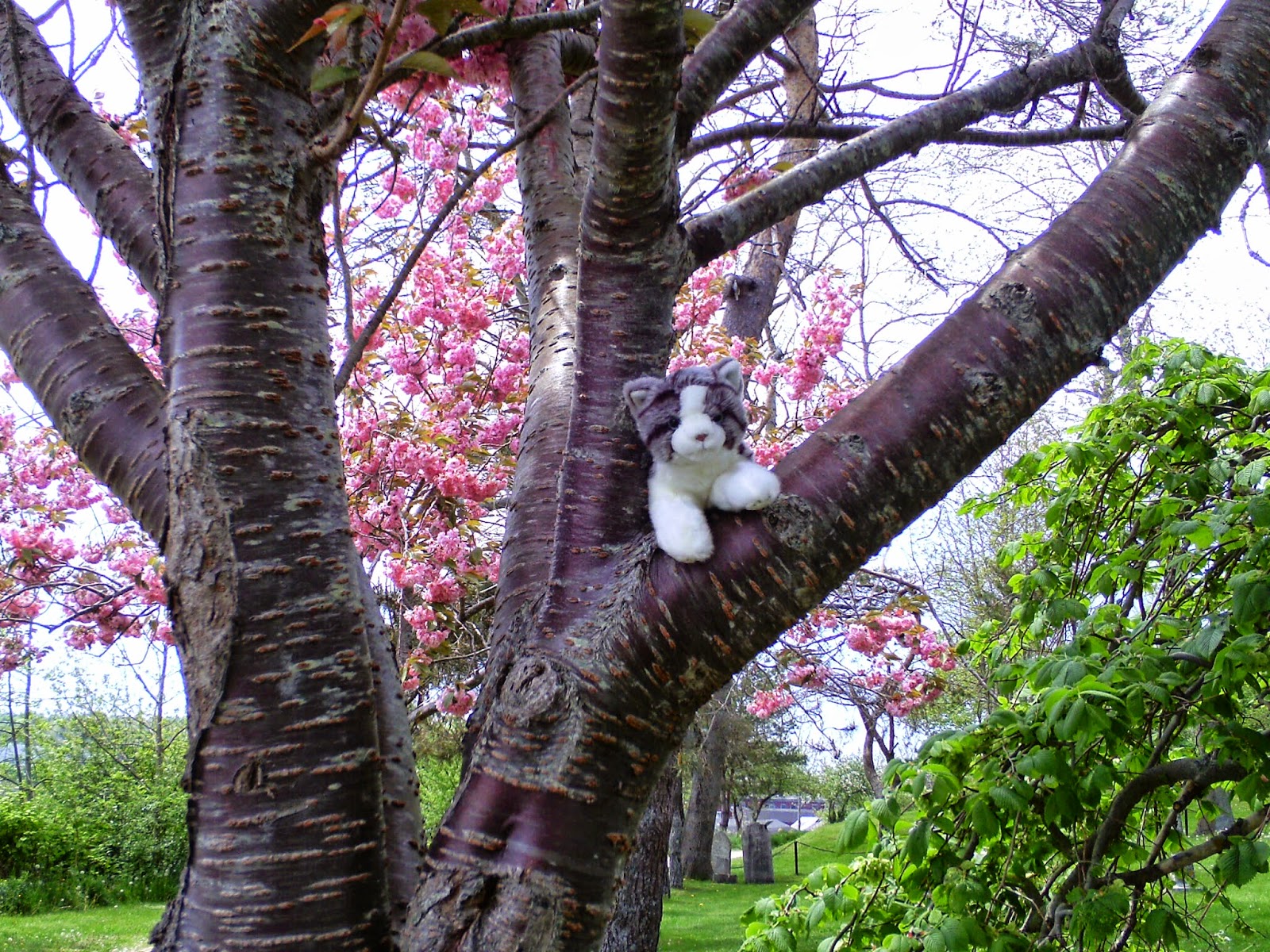 As Peep #1 was doin' the driving, it wasn't long before the three of them were totally lost.  I was on the line with Plush Nissy the entire time and from what little conversation I overheard, I gathered that this was not the first time Peep #1 had been lost in Lunenburg.  She kept goin' on about one-way streets and whatnot.  How was she to know which way to go?  Seriously folks, if a street is one-way, YOU DRIVE IN THE DIRECTION OF THE ARROW.  I sometimes wonder 'bout my peep.

Plush Nissy informed me that the peep was goin' backwards and forwards, up and down the various streets and they didn't appear to be gettin' anywhere, any time soon except, perhaps, even more lost than before.  "We're zigging and zagging so much it's like we're going in circles and we've been up and down so many hills, I'm starting to feel seasick," the plush me moaned, just before horking up a fur-ball which is amazin' as prior to this, I had no idea that plush cats even got those.  "Oh, look at that.  The ocean...  AGAIN."

"Tell her to drive AWAY from the ocean and keep on driving.  Keep the ocean to the south and she'll find her way home," I cried over the cellphone.  I took a deep breath and calmly informed Plush Nissy to tell the peep to look for high ground.  "And tell her to make it snappy.  They've probably already put an APB out on that fish.  Plus, I bet the ice is meltin'."

Realising that a speedy escape was of the essence, the plush me instructed the peep to stop the car so that he could climb up a nearby tree.  He peered to his left and then to his right, making careful note of which way was inland.  He jumped back into the car and, pointing away from the ocean he cried, "That way, Peepers!  That's the way home."

Peep #1 put her foot down on the gas and sped in the direction Plush Nissy was pointing.  Away from the ocean she drove.  Off in the distance was the sound of a police siren.  Off in the distance to start but the sound was getting louder and louder by the minute.  The police were after the fish which, although on ice, were clearly hot and we all know that after a while, hot fish can get rather smelly. 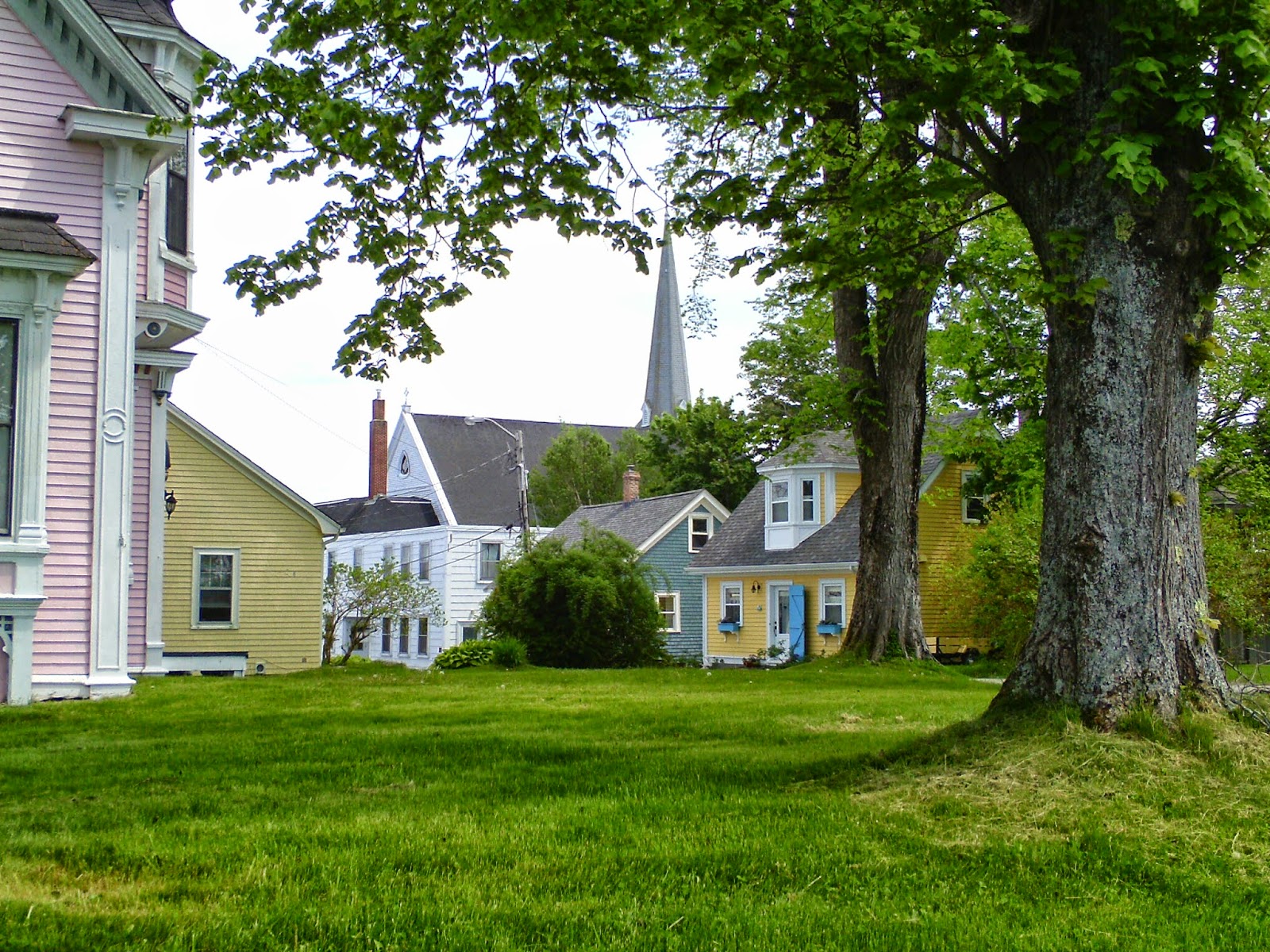 But someone must have been lookin' out for my peeps and the plush me for before they knew it, they were out of Lunenburg and heading home to safety.  Headin' home and bringing me my fish.  Mmmm...  YUM.


What' that Peepers?  What?  Okay...  FINE.  I have been informed that I must admit how I used some artistic licence in the writing of this post.  Plush Nissy didn't really steal a dolly full of fish and the peeps weren't really fleein' from the police.  That part about that the peeps gettin' lost, though?  Sadly, that part is all true.  MOUSES!

Posted by Seville at Nerissa's Life at 15:07