this is gonna be great

Looks like Bird TV is expandin'.  This is gonna be great.

The other day, Peep #1 was putterin' around in the garden, not doin' much but makin' a mess, really, when she finally made somethin' worthwhile. She made a discovery.

Nestled in and around the big multiflora rose in my bark yard, were a whole bunch of baby multiflora roses.  Only, they weren't really babies.  They were actually quite big.

You see, this particular rose bush, arches.  Yeah...  it makes arches.  Its branches or whatever grow up and then out and then arch right over and down until the tips of those branches touch the earth. This bush is one of the many sources of my faerie bowers about which I blogged a couple of summers ago.  Those branches arch over like a bridge but the rose isn't that big so peeps can't cross that particular bridge.  Neither can cats.  We're too heavy.  A squirrel might make it over. Maybe one of those little red squirrels but not the big monstrous grey ones.  Perfect sized bridge for faeries though, I should think.  But I digress...

These baby roses probably took root last summer and fall, says the peep, but she never noticed 'cause of all the leaves and flowers and whatnot on the bushes.  Not to mention the faeries. 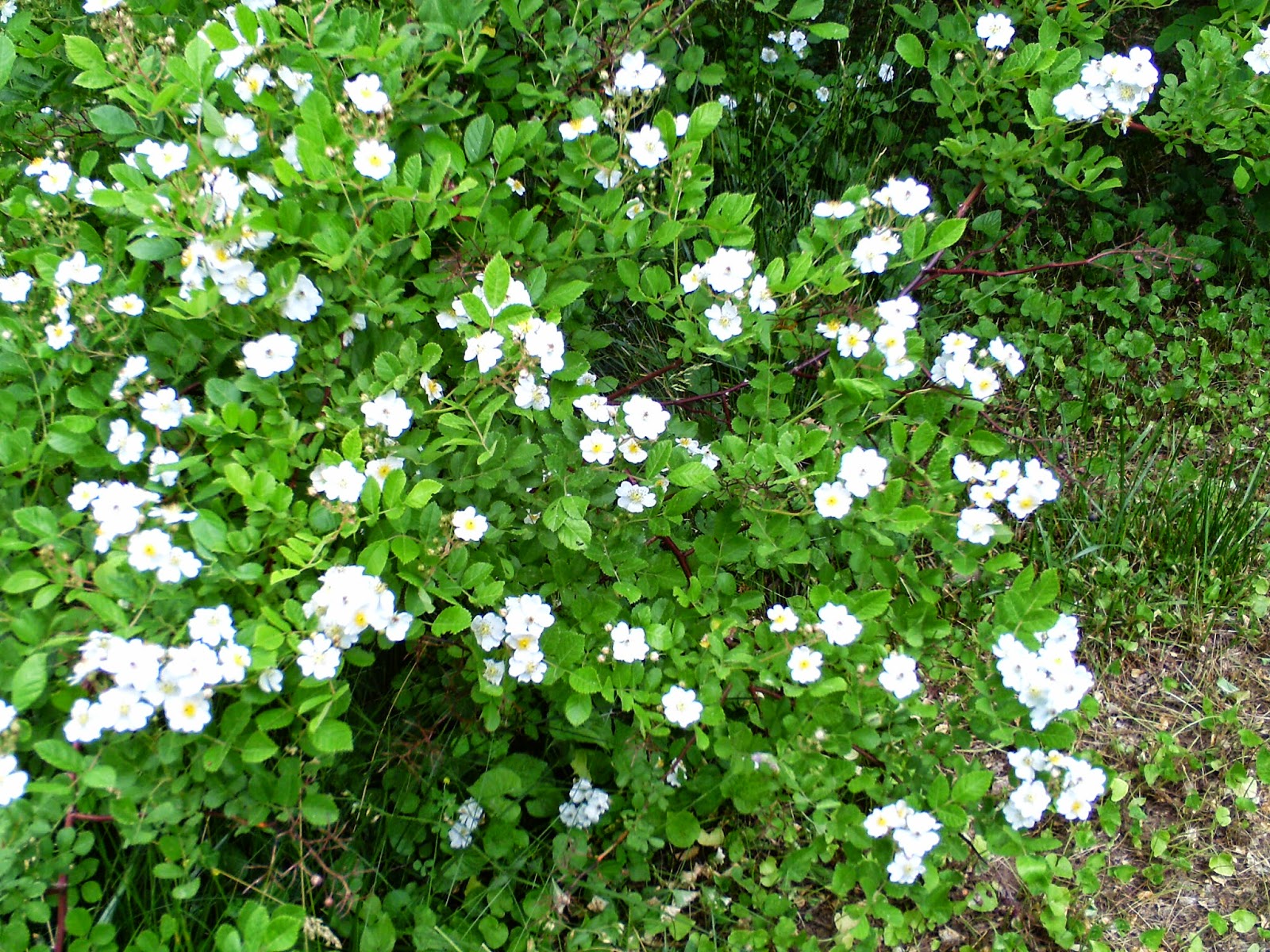 So after makin' her great discovery, Peep #1 got out the spade and some plant pots and potted up a whole whack of those rose bushes.  About a dozen of 'em, I believe.  Some will be donated to the plant sale for the animal shelter but five of them are gonna be used in the design of a new set right here in my garden.  That's right...  Bird TV is gettin' a new and improved set for its 2015 season.  Yoo-hoo!  YOO-HOO!

You see, those multiflora roses - or Rosa multiflora for those who wish to use their botanical name - are of great interest to the wildlife livin' in my garden as well as the peeps livin' in my house.  In early summer, the bushes are covered in flowers with a most heavenly, honey-like scent.  Peep #1 walks about with her snoot in the air, breathin' in the delicious scent of the roses and the bees come for the pollen, in droves.  Those bees pollinate the flowers so that in the fall, little rose hips form.  The birds love 'em.

Once, I think I saw a pheasant over by the big mama bush but I'm not sure that he was actually after the rose hips.  Might have been after somethin' else.  And yes, the rose bush is now a mama on account of her havin' all those babies and whatnot. 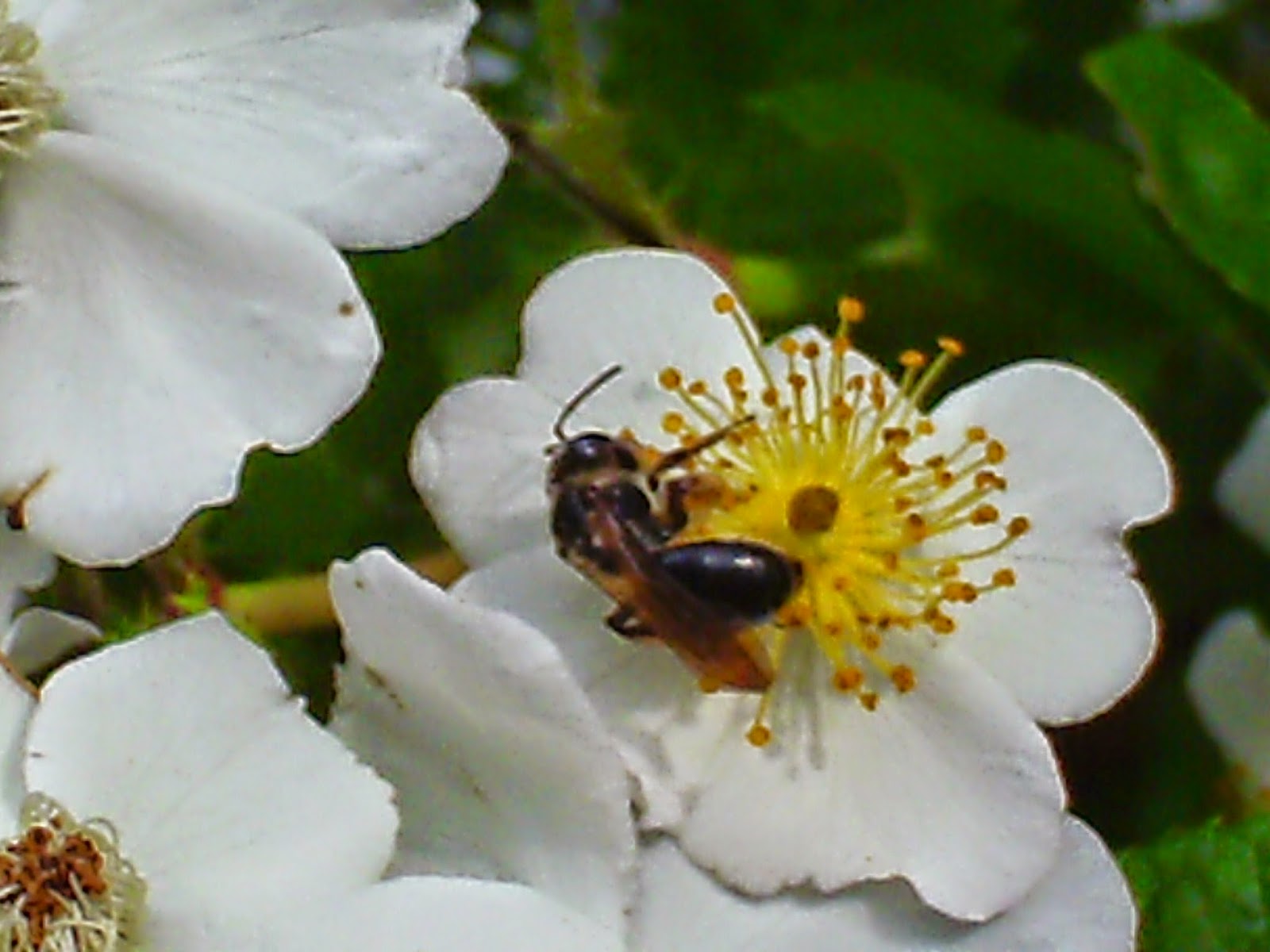 Okay, I'm not actually sure that they're robins.  Everyone 'round here calls 'em robins except for my second peep who calls 'em North American thrushes.  They do have red breasts like robins but it's quite possible they're actually thrushes in costume or somethin'.  Those Bird TV make-up artists might have put some blusher on their breasts or whatever.  Who knows?  Could Peep #2 be right about this? Stranger things have happened...

But whether they're robins or thrushes disguised as robins, they love the little rose hips that grow on those bushes. Earlier this year, I watched 'em absolutely devour every single rose hip on the multiflora rose in the back yard and the one in the front, too.

The Robin Show was extremely excitin' this year on account of all the robins, or whatever they're callin' themselves these days, eatin' those rose hips and then flyin' up to the old oak tree which does not have a yellow ribbon on it and then flying back down for more hips.

MOUSES!  I just had a thought.  Maybe...  Maybe the Robin Show is starrin' North American thrushes pretendin' to be robins.  They're actors.  Actors do that kind of thing all the time, right?  I mean, did William Shatner really fly around in space in a starship or was he just actin'?  And how 'bout that Garfield?  Did he really eat all that lasagna or did he really just act the part?  You decide. Oh, and how 'bout those peeps starrin' in the Senate scandal?  You know, that show filmed in Ottawa.  Wait a minute, those peeps weren't actors.  Those peeps were politicians.  Silly me.

Anywho...  back to the Robin Show on Bird TV.  Looks like they're gonna have a super-duper nicely expanded set for upcoming seasons with all those new rose bushes goin' in. Bet they'll expand the cast and everything.  Bet they'll expand the season!  Oohhh....  I can't wait.  Bet it's gonna win an Emmy, for sure.

Posted by Seville at Nerissa's Life at 12:09