judging a book by its cover

So Ol' Peepers decided she's gonna grow herself some strawberries next year.  Yeah, I know...  if she's gonna be growin' stuff, she should be growin' the nip but apparently, she has her heart set on strawberries and as long as nip growin' is still on the table, I'm gonna allow her to have her silly berry plants. My guess is that if the plants grow, they might just attract some new characters for my favourite channel, Bird TV.  Bird TV could do with some new characters. Been gettin' a little borin' with nothin' but The Crow Show, as of late.

The peep had already germinated the strawberry seeds in little plastic baggies and yesterday, she was planting 'em up in pots of soil.  I figured she would likely need my supervisory talents so I settled down beside her to watch.

First thing I noticed was that all the little plastic baggies had names.  There were nine baggies in all and each one had a different name written on it.  Most of the names were kind of silly soundin' but there were a couple I found intriguing.  Toscana and Milan were nice names, I thought and I told the peep so.  She agreed with me.  She said she thought she might like to start some more of those two, another year.  "You've grown them before, then?" I asked.  Her answer was no.

Why on earth would the peep think she would grow more of these Toscana and Milan strawberries just because she liked their names?  That didn't make much sense at all.  She has no idea if they'll grow well, if they'll produce lots of berries or even if those berries will taste good.  She has no idea at all.  Judging 'em by their names is a little like judgin' a book by its cover and everyone says you're not supposed to do that.   MOUSES!

I'm not overly happy when peeps out there judge me by my cover.  Granted, my cover is an irresistibly cute sterling silver - some say platinum - tabby cat, marked with a little smudge - some say beauty mark - on the chin.  But I'm way more than just a pretty face.  I'm an award-winning blogger, a hard-hittin' investigative news reporter and a scientist.  My gosh, I'm half of the world's foremost research team in egg beater-whisk time travelling-teleportation physics.  I'm even a member of the FBI.

Just 'cause I'm a cat doesn't mean I'm all about nappin' and nip.  Granted, I do enjoy nappin' and you all know how I feel about the nip but really, I'm so much more than that.  So very much more.  No, judgin' books by their covers is not the right thing to do at all.

Then I thought about it a bit more and realised that I, Nerissa the Cat, judge books by their covers all the time.  In fact, I've been doin' it all my life.  For as long as I can remember, I've had access to books and durin' all that time, I've been judgin' those books by yes, their covers.  MOUSES!

The peep is into what she calls cozy mysteries so we have a lot of those on the bookshelves in my office.  I've often noticed that many of the covers of those books include the picture of a cat.  Makes sense, really.  Add a cat to a book cover and you've got yourself a best-seller.  I mean...  who can resist a cat on the cover of a book?  Whatever else is on the cover will undoubtedly be improved with a cat and clearly, lots of writing peeps out there agree with this 'cause they keep on addin' pictures of cats to the covers of their books.  A very wise decision, indeed.

Ol' Peepers tries to keep her book covers lookin' good but sometimes a book or two ends up lookin' a little worse for wear.  Remember when I did that book review of my pal Dean James' book, Murder Past Due?  Well, that was the first book that I personally had ever read and to be honest, I found turnin' the pages a little difficult with my paws.  I did manage, however.  Well...  well let's just say that this might be one of those books whose cover looks a little worse for wear.  I tried to be ever-so-careful but it turns out that turnin' pages with paws is tricky business.  Stuff can get a bit damaged, here and there.  There might might be a few tooth marks on the cover of that book along with a scratch or two.  Those pages kept escapin' out from under my paws!  Wasn't my fault. 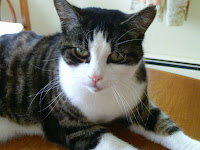 Anywho...  when you see a book with a worn-out cover like the peep's copy of Murder Past Due, that's a true sign of a book, thoroughly enjoyed.  Probably read from cover to cover more than once.  Might even have been enjoyed by multiple peeps or cats or both.  Clearly, one can judge that book as bein' pretty good by the state of its cover.

Sometimes however, book covers have other marks on them. None of the books in my house look like this but I've heard of books havin' circular stains on their covers.  Be very wary of books with circular stains on their covers.  This is a sure sign of a book that was not enjoyed by peeps at all.  The peep readin' that book must have set it down on a coffee table and left it there for so long that it was forgotten about, eventually becomin' one with the coffee table and it ended up bein' mistaken as a coaster or somethin'.  Any book forgotten for so long that it becomes a coaster is likely to be a very borin' book, indeed.  See what you can tell from the cover?

Now if you happen to live with a brother who very occasionally has been known to spray...  you might find a book or two with a little stain on it, especially if said books were left within easy access to said brother.  This too, could be a reason to judge those books by their covers.  My brother Seville has been known to spray on somethin' every now and then, markin' whatever it is as his own.  If a book was sprayed upon, well...  well he wanted that book for himself.  If a set of encyclopedias were sprayed upon, well...  clearly my brother wanted to increase his knowledge of the world.  The peep did manage to clean the books up.  Had they had paper covers, it would have been more difficult but the whole situation just reeks of somethin' needin' to be judged. 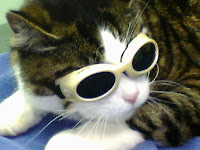 And speakin' of covers...  currently, the world outside my office window is covered with a blanket of snow.  It was snowin' when I awoke this mornin' and it's still snowin' now. Looks really pretty out there.  Everything is all clean and sparkling white.  Looks really nice for now but just wait until the dog walkin' contingent appears on the horizon.  Soon after that, some of that cover of sparklin' white snow will be suspiciously stained yellow.  FYI...  NEVER EAT YELLOW SNOW.  Just sayin'...