in search of Peter 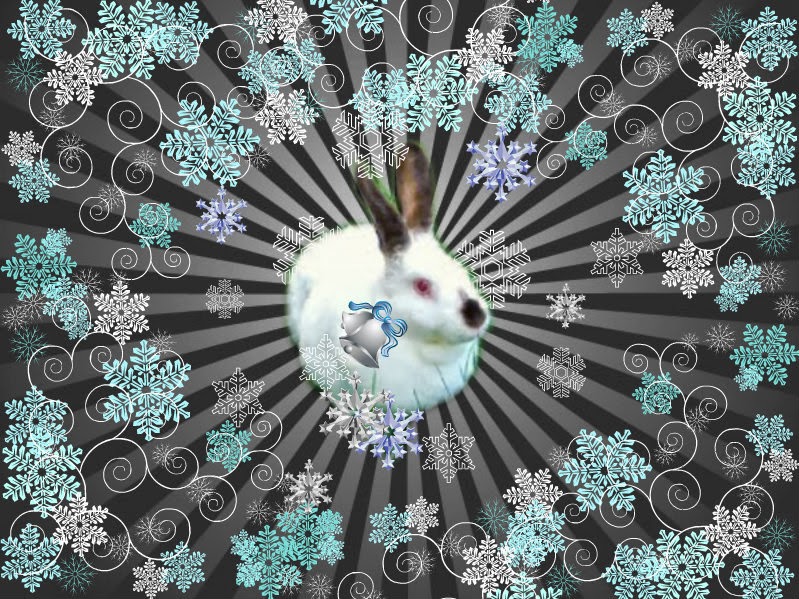 Previously on the Speedy the Cheeky House Bunny blog... "So time returned to normal as Santa left back through the Big closet.  I thought about the task of finding Peter.  I need some help and I know just the friend to help and as mummy left the room again I hopped into the closet and thought of my friend Nissy."

While busy digging through kitchen drawers looking for spare egg beater parts, Nissy heard a commotion coming from the front hall.  There was a squeal and a howl, followed by his sister Constance racing through the kitchen before darting into the family room and diving under the couch.  His sister Beatrice was close on her tail.  Dropping the wooden spoon in his paw, Nissy ventured into the hall to see what was going on.

The air in the room appeared hazy and some sort of waves were emanating from the closet.  Time appeared to be slowing down.  It was moving so slowly he could actually see the ebb and flow of the time waves.  "MOUSES!" he cried.  "The closet has never done that before."

Gingerly, Nissy used a paw to push open the door.  A blast of icy air poured out of the closet, filling the front hall with sparkling snowflakes...  the most beautiful snowflakes Nissy had ever seen.  He caught one on his tongue and as it melted, he could detect the faint taste of Arctic Char.  "Mmmm...  Wouldn't that be tasty garnished with a little nip?" he whispered to himself.  The snow subsided and out of the closet stepped Nissy's pal, Speedy...  Speedy, the cheeky house bunny.

"What?  How?  Oh yeah..." Nissy thought aloud.  "Speedy uses closet technology for teleportin'.  I had forgotten 'bout that."  Nissy peered into the closet which now appeared to be a perfectly ordinary closet, containing nothing but coats and jackets.  "Hmmm...  never knew our closet was hooked up to the network.  MOUSES!"

Knowing that Christmas was just around the corner and that time was of the essence, Speedy immediately told Nissy about his visit from Santa and how he had been asked to help find a wayward elf, Peter.  "Do you think you can help me find him?" he asked Nissy.

Nissy didn't have to be asked twice.  Being asked to help Santa was a great honour and privilege.  Of course he would help Speedy find the missing elf.  He would be thrilled to help.

"You're never gonna believe it Speedy but I think I know just where to look.  Wait right here."

Moments later, Nissy returned with what appeared to be a compass in his paw.  "This may look like an ordinary, run-of-the-mill compass but I had it modified to track reindeer dust.  Did you know that reindeer dust is radioactive, Speedy?  Well, it is.  I have a theory 'bout the radioactivity causin' Rudolf's nose to glow but we can discuss that later.  Anywho...  the radioactive nature of the dust 'causes a slight change in magnetic fields.  That's why the compass can be used to track reindeer activity.  I monitor all reindeer activity in the province of Nova Scotia every December." 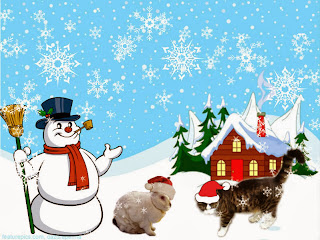 "Yes but the thing 'bout reindeer dust is that it's gets onto everythin'.  Those deer shed the dust like mad.  An elf who has been livin' up North with Santa's reindeer would be bound to have dust all over him.  As it turns out, around the time you say this Peter went missin', I was trackin' magnetic anomalies all over the place.  They were faint but they were definitely there.  Come on Speedy, I wrote down the co-ordinates of the last anomaly I detected."

Together, the boys headed back into the closet.  Nissy was holding the modified compass in one paw and the necessary co-ordinates in the other.  Speedy instructed him to think of where they were heading in order to initiate transport.  The closet filled with icy snowflakes once more and moments later, they were exiting another closet, a couple of miles away.

"Don't know why your closets fill up with snowflakes like this," Speedy told Nissy.

"Maybe 'cause they're Canadian?" theorised Nissy.  "Just be thankful they're not oozin' maple syrup or somethin'."

The boys immediately realised that this new closet was a very strange closet indeed.  It was more of a wardrobe than a closet and it wasn't in a house at all.  It was an old wardrobe being stored in a barn.  They ventured out of the wardrobe, walked through the almost empty barn and outside into the snow.

Speedy spied a snowman standing in a field and cried, "Come on Nissy.  Let's ask him if he has seen Peter."

"Why, yes.  Yes, I have," the snowman told the boys.  "Little feller, dressed in some rather odd-looking clothes.  He came by here just a few days ago and I told him to head on over to that house to take shelter from the snow."

"Thanks so much, Mister Snowman," squealed Speedy with delight.

"You can call me Frosty," replied the snowman.  "Glad to be of service."

Nissy and Speedy scampered excitedly toward the house off in the distance.  As luck would have it, a man in his late thirties was bringing firewood in and had accidentally left open the door.  The boys slipped inside.

Christmas music could be heard in every room of the house and the air was filled with the smell of sugar cookies baking.  Two young children were laughing joyfully while decorating a beautiful tree.  It was a lovely sight and the boys stopped to take in the sight and sounds and smells.

Nissy was the first to spot him and whispered to Speedy, "Look there.  Look up on top of the tree.  It's Peter!"

At the very top of the Christmas tree sat a little elf, trying to put on a brave face but stifling a sob, every now and then.  Seeing Speedy and Nissy, he climbed down the tree and walked over to the boys. 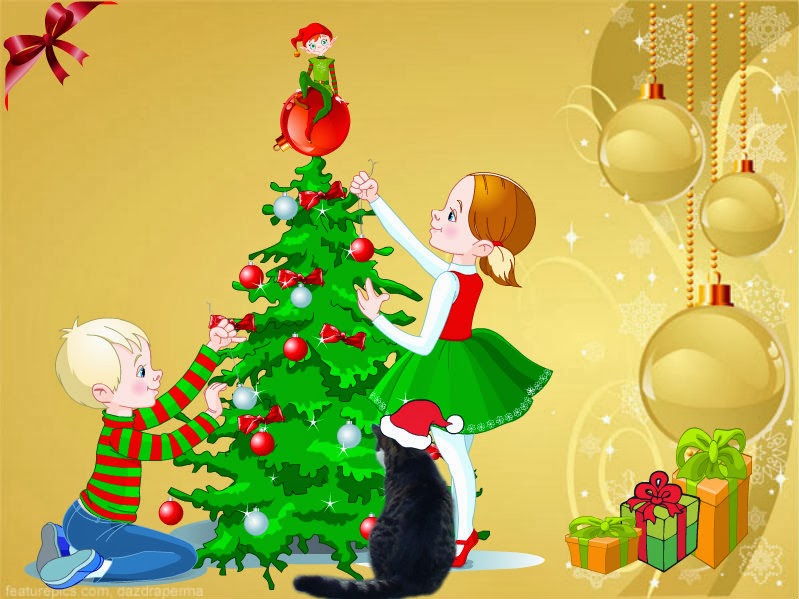 "They've been awfully kind to me," explained Peter.  "I couldn't have found a nicer family.  And the children really do love Christmas and they believe in Santa just like Santa said they did but..."  He started to sob uncontrollably.  "But I'm stranded here now.  I'm stranded here in Nova Scotia with no way to get back to the North Pole and I miss the other elves terribly."  He stopped to blow his nose.  "I want to go home!" Peter cried.

Having no handkerchief at his disposal, Nissy passed Peter some tissue wrapping paper.  Peter wiped his eyes and blew his nose again before handing the tissue back to the cat.  "Ummm...  that's okay.  Why don't you keep that," suggested Nissy.

Nissy looked at his pal Speedy and asked, "But we can help Peter, right?  We can get him back to Santa in time for Christmas?"

Stay tuned...  our story will conclude on the Speedy the Cheeky House Bunny blog, tomorrow.
Posted by Seville at Nerissa's Life at 02:30