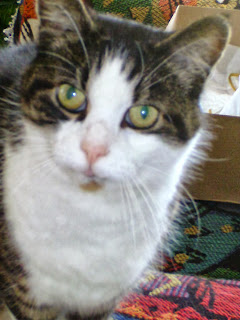 I did.  I did.  I really, really did.  I got some major mail over the holidays, for sure.

On Friday, there was a notice in the mailbox sayin' that I had to go to the post office to pick up a parcel. Well you know how I don't like goin' in the car, right? Right.  So I sent the peep.

There was a parcel to be picked up and the man at the post office said that I, Nerissa the Cat, had to sign for it but...  well...  I wasn't there so the peep signed for me.  Hope no one noticed our little switch-a-roo there.  Couldn't be helped.  Like I said, I don't like goin' in the car.

There was printin' on the box in foreign languages.  That's right...  languages.  Languages with an 's' as in plural.  On the box was printed, Die Post, La Poste, La Posta.  Hmmm...  now what could that mean, I thought to myself.  Of course, I knew, instinctively.  Must mean mail or somethin' like that. But why the three languages?  German, French and...  and...  and Italian?  Yes, definitely Italian.

"How do you know that La Posta is Italian?" the peep asked.

"I know stuff," I answered.  "I know stuff about other countries and the languages cats and peeps speak there.  Check out my badge from the FBI.  Like it says, I'm an international mancat of mystery.  International," I reiterated. 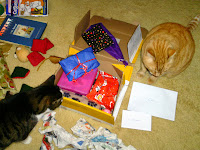 I was still checkin' out the foreign words when I spotted, Swiss Post.  I knew in an instant from where that parcel had come.  I knew right away that it must be from my pals Loupi and Zorro who write the amazin', Swiss Cat Blog.  I immediately deduced that they were my Secret Paws.  Yoo-hoo!  YOO-HOO!!!  My Secret Paws prezzie had arrived!

By this time, Seville had appeared on the scene.  He wanted to help me open my prezzie and in the spirit of Christmas, I let him.  Together, we checked out all the stuff inside the box. There were all sorts of prezzies and each one was carefully wrapped in pretty coloured tissue.  Lovely, I thought.

It didn't take long before Sivvers and I had ripped open those prettily wrapped prezzies.  What fun we had.  There was a wand toy with feathers and another toy that looked like a butterfly with feathers and nip.  There was this great toy that looked like a giraffe's head and neck.  I grabbed hold of it by its neck and played and played and played.  What fun.  What fun!  There was even a blanket.  It's super soft and I played on it with my new toys for ages yesterday afternoon and after I finished playin', I had a nap on it.  Very comfy blanket for nappin', for sure.  Oohhh..  and there were treats! There was a bag of treats for my fur family and me and a box of treats for the peep.  Chocolates, she said.  The peep likes chocolates so those should go down very well. 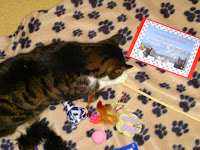 There was even a card.  Actually, there were two cards but one was for the peep.  The important one was for me, of course.  It was really nice.  It said, Dear Nerissa and siblings.  We wish you all a Meowy ChrissyMouse 2013! and was signed by my pals, Loupi and Zorro.  Neat, huh?  It even had their pictures.

I wanna thank Loupi and Zorro from the bottom of my heart for the wonderful Secret Paws prezzies they sent to me.  I love 'em!  Yup, I love each and every one of 'em.  My brother Seville really loves 'em, too.  Won't be long now before all my fur-sibs are loving 'em up.  They're pretty amazin', for sure.

But all this Secret Paws stuff got me to thinkin'.  Thinkin' about how maybe I should be lookin' for a new peep or two.  Loupi and Zorro's mum had put such care and effort into wrappin' my prezzies. What a wonderful job she did with them. 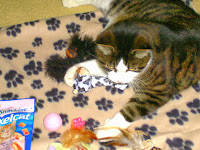 But I know for a fact that when Ol' Peepers wrapped up the prezzies I was sendin' to Kizzie over at the wonderful blog, Kizzie Cat, she didn't do nearly as well as Loupi and Zorro's mum.  MOUSES!  The peep said she had wrapped the prezzies in tissue and then sealed them in plastic bags so that none of the post office peeps would get high on the nip or anythin'.  Yeah...  right...  like that's gonna happen. Wait a minute...  it could happen.  If Canada Post employs cats, it could happen for sure.  You know us cats with the nip!

Then I asked the peep what kind of card she had enclosed for Kizzie.

MOUSES! Peepers.  You forgot to enclose a card?  What will Kizzie think of me?  Of course, Kizzie probably knows the reputation of my peep.  Doin' a million and one things the month before Christmas and not gettin' any of those things right.  Rest assured, Kizzie, had it been I who had packaged up your Secret Paws prezzie, there would have been a card.  Sorry 'bout that.  Sorry I didn't do a better job of supervising the peep.

Basically, Peep #1 got a major FAIL on the Secret Paws stuff.  She didn't wrap Kizzie's prezzies in pretty paper like Loupi and Zoro's mum wrapped mine.  She forgot the card.  Goodness knows what else she messed up. 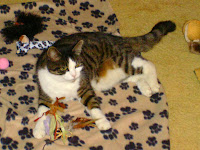 Well, she sent out my BFF's prezzie late.  That's right, she mailed Herman's prezzie so late, I'm positive it didn't arrive in time for Christmas.  You all know Herman from the incredible blog, It's a Wonderpurr Life, right?  Right.  Anywho... Stuff takes longer than a week to get places when you're not usin' egg beater technology, Peepers.  She did manage to do up a card for my pal Herman but it had to be taped onto the outside of the parcel 'cause she forgot to put it inside before tapin' the parcel up.  MOUSES!

And then there were the Christmas cards that were never sent out.  I recieved amazin' cards from some of my twitter pals like Nancy Cake Face and Angel Phi and Dylan.  Beautiful Christmas cards, they sent me.  But what happened to the cards I was sendin' to them?  Good question.  Let me put it this way...  I think I'll be sendin' the peep out for Happy New Year cards to send to my pals 'cause the Christmas ones never got mailed!  Maybe I should skip New Years and send 'em for Valentines Day.  If she starts on Valentines Day cards now, surely they'll get to my pals in time for that.  Again I say...  MOUSES!

I will also be sendin' Ol' Peepers out for a thank you card for my pal, Savvy, who writes the fantastic blog, Savannah's Paw Tracks.  Savvy made a donation in my name to help save the wolves.  Wasn't that nice?  I like wolves.  I don't think I'd ever wanna meet one face to face or anythin' but I still like 'em and I wish peeps out there would stop persecuting them and doin' awful things to such beautiful creatures.  Wolves are people too, you know. 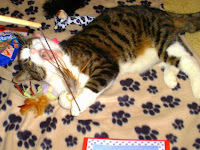 Now I think that's all the stuff the peep screwed up regarding my mail.  Hmmm...   How did this become a post about the peep screwin' stuff up?   I had planned on writing a post about all the wonderful mail I received this holiday season.  I guess Ol' Peepers just did one too many screw-ups and her messin' things up out-weighed my glorious receivin' of the mail.  Once more I must say...  MOUSES!

Oohhh...  and a VERY HAPPY NEW YEAR! to everybody.  My next post will be on New Year's Day but I wanna get in my greetings for everyone early just in case Ol' Peepers, here, screws that up, too. MOUSES!