the past, the present and the pumpkin pie 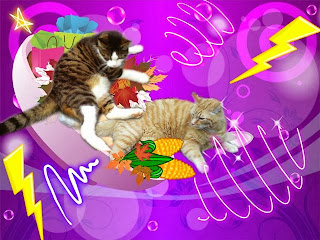 "PEEPERS...  prepare the teleportation device!"  Hmmm...  on second thought, scratch that.  This will be an adventure about which the peep need never know.  Never, never...  not ever.

"On it, Nissy.  We're almost ready for teleportation.  I'm just making the final adjustments to the whisks now.  Plymouth, Massachusetts, 1621.  That the right date?"

"Not quite, Seville.  I did some research on the subject and the pumpkin pies that were eaten at the very first American Thanksgiving were nothin' like the pumpkin pies that peeps eat today.  There was no crust or anything.  Can you believe it?  MOUSES!  We need to head back to the 1700s or so.  Any time before 1796 will do."

"I told you, I did research.  I found a page from an old cookbook that contained a recipe for pumpkin pie.  One with a crust and everything.  That book was published in 1796 so we need to go back in time before then.  A few years before then would be great.  Aim for 1790 or so.  That should give us plenty of time."

Nissy shoved the page from the cookbook into Seville's paw.  "Here, you'll need this.  It should help with the locational co-ordinates.  Make sure we teleport to the right place." 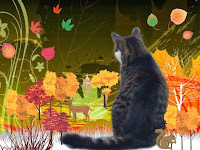 "Excellent work, Seville."  Nissy snatched two bags from the kitchen floor and placed them carefully into the frying pan before climbing in, himself.  "Come on Seville.  Time's a wastin'!"

Seville began to rev up the egg beaters.  "Grab a whisk, Nissy and start whisking."

Over the sound of  howling wind, Seville cried out to Nissy, "YOU HAVE CONTROL OVER THAT CALENDAR?  BE READY TO STOP IT AT 1790!"

"GOTTA GO BACK JUST A TAD BEFORE THEN," Nissy hollered back, slamming a paw over the gizmo when it reached 1775.  "ARE WE IN THE RIGHT GEOGRAPHICAL AREA?  IS THIS NEW ENGLAND?  HOLD US STEADY IN THIS TIME WHILE WE FLY OVER THESE FIELDS.  CAN YOU HANDLE IT ON YOUR OWN?"

"GOT IT COVERED, NISSY." 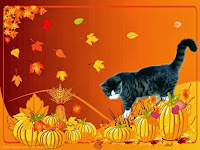 The wind was creating terrible turbulence and the two cats found it difficult to hold onto the edges of the frying pan.  They were being buffeted back and forth between conflicting time lines.  Nissy held onto the pan with his back paws while using his front ones to empty out the contents of the paper bags he had secreted into the teleportation device earlier.  "PLANTING THE NIP SEED NOW," he cried out to Seville.  The nip seed was dispersed over the fields below by the winds of time.  "NOW GET US BACK TO 1790!" he yelled to his brother.  "PUT US IN REVERSE!"

Seville grabbed the frying pan handle and swung it over to his left before yanking it upwards.  The teleportation device came to a screeching halt and the two cats were thrown into the field of catnip that lay before them.  Nissy breathed in deeply.  Ahhh...  the sweet smell of nip.  "The nip seeds grew well," he smiled smugly.

"How did all this nip get here?" asked Seville?  "You just planted it a few seconds ago."

Nissy breathed in deeply again.  How he would love to just hang out in this field for a few hours but there were things to be done.  They couldn't afford to get nipped now.  "Come on Sivvers," he said, hauling his brother through the field.  "Part one of my plan is complete.  Now for part two."

The boys trudged through the vast field of nip.  European nip that had now been successfully introduced into the Americas by none other than Nissy, himself.   What an accomplishment for a little sterling silver tabby cat. 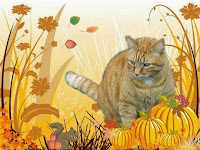 Before long, they came upon another field.  One in which pumpkins grew.  Pumpkins that were perfectly sized for using in pies.  Nissy knew then that his plan was going to succeed.  This was clearly pumpkin pie making territory.  All that needed to be done now was to make a few adjustments to the traditional recipe for making those pies.  A few adjustments to the recipe that would one day be published in the cookbook he had found in the local library's archives.

After walking another half hour or so, they spotted a small house off in the distance.  The boys instinctively knew that this house was their destination.  In this house, the future of pumpkin pie would change forever.

Although near exhaustion, they ran toward the house as quickly as their paws would carry them.  They stopped short at the door.  Nissy knocked, politely.  A woman named Amelia answered but looking only straight ahead, she didn't see the two cats down at her feet.  She glanced both to her right and to her left, never noticing Nerissa and Seville padding softly into the house and hiding behind various pieces of furniture.

Night fell and the woman retired to bed.  Nissy prodded at Seville who had fallen asleep under a large chair.  "Come on Sivvers.  This is our chance.  We've gotta help Amelia with her pies."

Nissy found Amelia's notes for her upcoming cookbook and got to work right away.  "We just need to make a few changes to this recipe," he told his brother.  "Just a few changes here and there before the manuscript is sent off to the publisher." 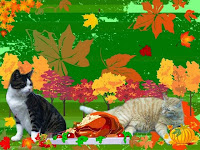 Grabbing a pen on the writing desk, he began to write.  "Hmmm...  cloves?  Nah, scratch that.  We'll replace the cloves with nip.  Nutmeg?  Nope, don't need that either.  We'll replace that with nip, too.  Cinnamon...  I definitely think that could be replaced with the nip."  Nerissa scratched out the unnecessary ingredients and quickly did some mental calculations as to how much catnip would be needed and wrote it down.    "Okay, we've got pumpkin, eggs, sugar, cream and a cup of nip."

"A cup?  That sure is a lot of nip, Nissy," mentioned Seville.

"Don't worry, Sivvers.  The effects will all cook out...  MOUSES!  We don't want that to happen.  Hmmm...  we had better add another quarter cup of fresh nip to the whipped cream that goes on top," Nissy muttered before finishing his task.  He tucked the recipe back into Amelia's notebook and placed the notebook exactly where he had found it an hour before.

Seville sniffed the air.  "Nissy," he began.  "I'm sure I smell some yummy smells coming from the kitchen.  I think that Amelia lady roasted up a turkey or something.  Do you think we could have a bite or two before heading back to 2013?  A cat doesn't wanna teleport on an empty stomach, if you know what I mean."

"I know exactly what you mean, Seville and you're absolutely right.  Let's go enjoy a little snack.  It's a long walk back to the egg beaters and we need to keep up our strength." 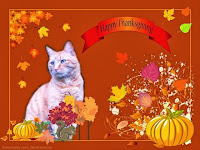 Munching on roasted turkey, the boys thought about all they had accomplished on their adventure.  Nissy knew that if all went as planned, they would return to a new version of the year 2013 where pumpkin pies were filled with cream and catnip and not ruined with all those spices that couldn't possibly equal the brilliance of the world's greatest herb of all time...  nip.  Oh, they had done well on this adventure.  So very, very well.  Thanksgiving dinners would be changed forever but changed for the good.  Most definitely changed for the good.  It would be a very HAPPY THANKSGIVING for everyone.

Posted by Seville at Nerissa's Life at 00:04