Election results are pourin' in.  The guessers have all guessed and the predictors have finished their predictin'.  The voters of Nova Scotia have voted and they have decided who will be the next Premier of our fair province.  Stephen McNeil has been elected as the next Premier of Nova Scotia.  When I last looked, the Liberals had won thirty-three of the fifty-one available seats, winning a majority government with Premier Elect Stephen McNeil as its leader.

I knew by mid-afternoon that there was trouble brewing for Earl Grey's campaign.  I knew something was up.  I knew something was wrong.  I knew my pal didn't stand a chance.  You see, when the peeps arrived home after voting, they broke the news to me.  Apparently, nowhere - and I mean absolutely nowhere and without a trace - on their ballots was the name, Earl Grey.  No one could vote for my pal 'cause my pal's name was not on the ballot.  MOUSES! 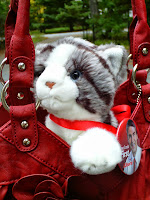 I immediately went into action.  To be truthful, I first had a little cry and then I imbibed in a biff bag full of nip.  But even I will admit that catnip can do only so much for a cat so I, Nerissa the Cat, pulled myself together and implemented Operation FLEA.   That's right, FLEA as in Feline...  well...  actually...  actually the other three letters don't stand for anything.  I just thought Operation FLEA sounded really good.

Basically, I needed to infiltrate Stephen McNeil's party headquarters.  I needed a man on the ground right there in the midst of their celebratin' when the results came in.  Who to send...  who to send...

Obviously, I wasn't going to send me.  I don't like the car.  Then I thought to myself, Plush Nissy!  Plush Nissy will be the perfect infiltrator.  I've taught him everything I know.

Clearly, Plush Nissy is a cat.  This could pose a problem.  Everyone who is anyone knows that all cats in the province support the Tuxedo Party of Canada and their candidate, Earl Grey.  Plush Nissy needed a disguise.  So I grabbed a Stephen McNeil campaign button for him and tied it around his neck.  "That should do the trick!" I told the plush version of me.  "No one will ever recognise you as a Tuxedo Party supporter when you're wearin' that."  The plush me crawled into the peep's purse for transport and he and the peep were off.

They arrived at the building hosting the party to find big television news vans sportin' all sorts of satellite equipment and whatnot.  Those were pretty fancy-schmancy set-ups those television crews had but Plush Nissy and I weren't fazed.  We weren't intimidated at all.  A little jealous, perhaps.  All I had was a plush me in the peep's purse.  MOUSES!

Once inside the campaign headquarters, Plush Nissy and I kept in constant communication with one another.  I had placed a wire in the campaign button for just that purpose.  I told the plush me to have a look around and see what he could see without being too conspicuous.  "Listen in to what the crowds are saying," I told him.  "See if anyone is talking 'bout our Earl Grey." 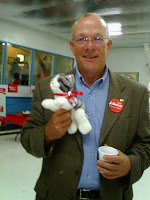 It wasn't long before the plush me came across a man named Robert Thibault.  The name sounded familiar and I did a quick background check on him.  At times like this, it sure is handy to be a member of the FBI...   Feline Bureau of Investigation.  Sure enough, my search discovered that he was someone pretty famous.  A former Member of Parliament or something like that.  I told Plush Nissy to get a picture of him and that's just what the plush me did.

Unfortunately, that was the beginning of the end for my fabric counterpart's good behaviour.  Plush Nissy took one look at the table set up with food and made a run for it.  I knew I should have sent him with snacks.

Apparently, the food assortment was a disappointment.  No Fancy Feast...  no Treat Temptations...  no NIP!  What kind of party has no nip?  I bet Earl Grey had nip at his end of campaign party.  Clearly, Stephen McNeil was not expecting any cats to attend his event.

"It's okay," stated the plush me.  "I've got a nip mouse here at the bottom of the peep's purse.  I snuck it in when you weren't looking.  I'll just crawl down and have a sniff or two."

"Careful of the nip!" I cried but it was too late.  The plush me was already down at the bottom of the purse.

For what seemed like an eternity, all I could hear through the communications button was Plush Nissy enjoyin' that nip mouse.   He was clearly enjoyin' himself a little too much.

Through the communications button I heard one man say that this guy and that guy had always supported other parties before this election.  They had switched sides.  I wondered if any Tuxedo Party supporters had switched sides.  "Look for cats," I instructed the plush me.  He said there were none.  He appeared to be the only cat at the party.

People everywhere were watching big television screens and every now and then they would let out loud hoots and hollers.  There would be clapping and cheering every time the television screen showed one of their candidates winning a riding.  The excitement was rising.  Soon Stephen McNeil would appear.

Tip-toeing through the crowd, Plush Nissy discovered that absolutely no one was mentioning the Tuxedo Party or Earl Grey.  No one at all.  He crept up to one of the large television screens to see if they were anywhere on the board.  Nothing.  No trace.  MOUSES!

"Nissy," said the plush me.   "It's super loud in here and I've gotta give my ears a break.  I think I'll just head down to the bottom of the peep's purse and sniff a little of that nip mouse."

"Careful of the nip!" I cried but again, I was too late.  The plush me had disappeared into the purse once more.

An hour or more later, Plush Nissy emerged from the purse.  Clearly, he had been nappin' down there.  And what a sight he was.  What a dishevelled looking mess was the plush me.  His ribbon had come undone and his communications button was all askew.  That was just about the time when Premier Elect Stephen McNeil picked him up for a photo op.  I held my head in my paws and shook it in dismay.  There was the plush me - REPRESENTING ME - and lookin' like a complete mess.  What would my readers think?  The camera flash went off and it was too late.  Oh yeah, sure...  Stephen McNeil came out lookin' great but what about the plush me? 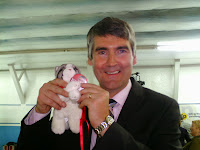 That Plush Nissy simply cannot hold his nip.  I suppose, though, it's not entirely his fault.  He was enjoying that nip mouse on an empty stomach.  Had there been some Fancy Feast or Treat Temptations available, the plush me would have handled the nip far better.  Hmmm...  there should have been some cat snacks available.  I mean...  once they figured out that Earl Grey's name had been omitted from the ballot, they should have realised a cat or two might switch sides.  Not that the plush me and I were switching sides or anything.  We're still loyal to the Tuxedo Party of Canada.  After all, we're still cats.

Posted by Seville at Nerissa's Life at 02:21