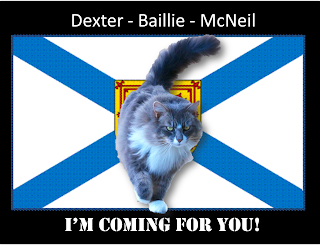 ...and that's why Earl Grey has my vote for Premier.  'Nough said.

Last autumn, something wonderful and miraculous happened in the Province of Nova Scotia.  What was wonderful was the fact that a tuxedo cat named Stan ran for Mayor of the largest city in this fair province.   What was miraculous was that the politicians of the province sat up and took notice.  We feline Nova Scotian residents finally had a voice and were bein' heard.  Amazin'.

I blogged all about Stan and his run for Mayor, last autumn.  Other news outlets picked up the story too but let's face it, as a Nova Scotian feline reporter, I sort of had the inside scoop.  You can read all about Stan's run for Mayor in my blog post, Stan is your man!

Although Stan was runnin' for Mayor of HRM, his name was suspiciously left off the ballot.  MOUSES!  Conspiracy theorists have come up with several theories as to why however so far, none have been proven.  On the other paw, none have been disproven, either.

Undeterred, we cats all knew what the autumn of 2013 would bring.  We Nova Scotian kitties were plannin' the biggest electoral upset in the history of Canadian politics.  October 2013 would bring a provincial election and our man Stan would run for Premier.

Then the unthinkable happened.  The day after the provincial election was called, Stan had to make his journey to the Rainbow Bridge.  What a terribly sad day it was for kitties all around the world when my pal Stan succumbed to cancer just a few short weeks ago.

But Stan didn't leave us on our own.  He passed the political torch to his brother, Earl Grey, who is now running for Premier of Nova Scotia.  That's right...  in the upcoming provincial election, the number one, best-looking and most charming candidate is a cat.  Yoo-hoo!  YOO-HOO!  Excuse my exuberance but I just can't help but be enthusiastic at a time like this.  We have a cat running for Premier.  FINALLY!

Earl Grey is goin' nose-to-nose and paw-to-paw with the leaders of those other political parties.  Watch out MLAs, Misters Dexter, Baillie and McNeil.  The leader of the Tuxedo Party of Canada has four paws to your every two and when it comes to noses, that cute little pink one of Earl Grey's is by far the best lookin'.  Politicians disagree on a lot of stuff but there's no way, no how, that they can disagree about that.  It's a fact. 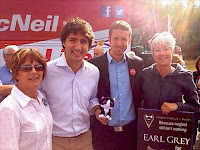 Earl Grey's candidacy has even been noticed by federal politicians.  In his recent trip to our province, the leader of the Federal Liberal Party was spotted chatting it up with an Earl Grey minion.  Yes, Justin Trudeau took the opportunity for a photo op with Earl Grey's furry representative.  Clearly, this is an attempt on Member of Parliament Trudeau's part to further political relations between our province and Ottawa.  Either that or he's worried that Earl Grey might eventually make a run for Prime Minister.


There are those factions who see Earl Grey's run for Premier as a gimmick.   Nothing but a bit of fun.  Those people couldn't be more wrong.  They couldn't be further from the truth.  The plight of Nova Scotian kitties is no laughing matter.  It's not funny at all.

In the Province of Nova Scotia, live a large number of abandoned, unwanted and feral cats.  These cats are usually unspayed and unneutered and through no fault of their own, contribute to the cat overpopulation.

Imagine living through a Nova Scotian winter alone and homeless.  Nowhere to go.  Nowhere to turn.  No one to help you. 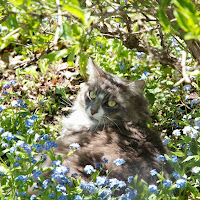 When temperatures dip far below the freezing point, the very ground upon which you walk becomes a painful torture.  The pads of your paws redden.  They become inflamed and raw.  Every step hurts.  Your tummy is empty but long ago gave up growling for growling was futile.  There are no mice to catch.  No moles.  No squirrels.  The ground is covered in snow and the only food available is what you might manage to scrounge from someone's garbage can.

If you're lucky, you might find a kind-hearted soul who will leave out for a dish of food for you, now and then.  But not everyone has a kind heart.  For every caring person you come across, you'll find another who would think nothing of giving you a kick in your side with their boot or chase you away from their doorstep with a broom.  And those people who do try their best to help the homeless cats of this province often face the wrath and ire of the unkind.  They're labelled as being "bleeding hearts" and scorned.

My opinion is that to have a heart that does not bleed, marks you as inhuman.

In Earl Grey's Campaign Platform, he makes several worthwhile recommendations for the Animal Protection Act.  Abandoning companion animals would be made illegal, affordable spaying and neutering clinics would become available and those investigating and prosecuting charges of animal cruelty would be able to do so without having all four paws tied behind their backs.

The current Animal Protection Act, although revised in April of this year, clearly lacks any bite when it comes to the plight of cats in this province.  Nowhere in the act does it even mention the word, cat.  MOUSES!

As stated in Earl Grey's Pledge of Compassion and Action, this province's animal protection legislation "is dated and inadequate."  He asks that all candidates from all parties sign his pledge, promising to "help animals in our province."  Although a number of candidates have signed Mr. Grey's pledge, there are still a number of them who have not.   It's not too late.  The campaign isn't over until it's over.  There is still time.  You can still sign on the dotted line. 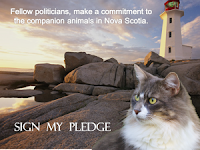 Many of the voters of this province truly believe that it is the provincial government's responsibility to put things in place that will help homeless cats.  People are often shocked to find out that many shelters do not receive adequate government funding if they receive any at all.  They also complain when charges of animal cruelty are dropped or when those convicted are not punished severely enough.  These issues have been brushed under the carpet for far too long.  It is time for the provincial legislators to recognise that animal welfare is an extremely important issue to the people of Nova Scotia.  And if it takes what they believe to be a light-hearted joke to get them to listen, then so be it.  It's time for the message to be heard.

***  All photos were used with the kind permission of Earl Grey's campaign staff.
Posted by Seville at Nerissa's Life at 00:38