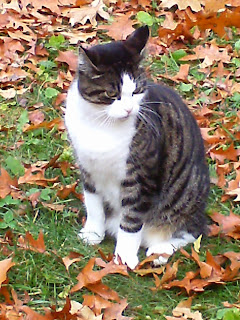 Anywho...  peep #2 came downstairs one mornin' all agitated 'bout a whole bunch of peeps gettin' lost in a corn maze overnight.  The next mornin', the farmer noticed fifty, sixty, seventy cars in the parkin' lot and realised there were peeps lost in the maze!  He hopped in his...  his...  his farm doohickey farmin' equipment tractor kind of thing and cut himself a path through that maze straight to its centre where he found all the peeps huddled together.  They had been there all night.

Now, I overheard this conversation between my two peeps and thought...  MOUSES!  I've got myself a blog post in this here ol' mess.

There were so many questions to be asked.  Where was this maze?  How big was this maze?  How cold was the night?  And, of course, why the mouses did the farmer not notice all those cars in the maze's parkin' lot when he went home for the night the day before?  That last one would be a very excellent question, for sure.

I grabbed myself a hot mug of nip cider - my new invention - and headed for the computer.  I had work to do.  Information to find.  A story to write.

Now, I know for a fact that peep #2 quite likes to listen to CBC Radio at night so I started there.  I typed in corn maze and CBC and immediately found my answers.  I found all my answers.  All the answers a cat could possibly need.  In fact, I found a few more answers than I wanted.  Answer number one was the fact that the second peep is a mousin' lunatic!  MOUSES!

Once again, the second peep had led me on a wild goose chase and this time that goose was chasing me through a field of corn. 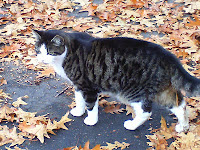 There was no maze.  There was no farmer.  There were no lost peeps.  It was all a made-up story from a CBC comedy radio show called This is That.  MOUSES!

I sat there at my desk and stared at the computer screen.  I could hardly believe my eyes.  Tricked by the peep's reliable unreliability once again.  Yes...  AGAIN.  You see, it wasn't that long ago when I thought I had another newsworthy topic for a blog post that also turned out to be that ol' second peep bein' fooled by a This is That comedy radio broadcast.  Mouses indeed.

I hopped down from my chair and spun in circles while I chased my tail.  Not catching it, I stomped into the kitchen.  "Peep!" I cried.  "You've got some explainin' to do."

"But it could happen," whined the second peep.  "It almost happened to us a few years ago.  Really it did."

I glared at the second peep.  What was this?  Was the peep tryin' to pull the wool over my whiskers with even more tomfoolery?

"Honestly, it did.  A few years ago," began the peep, "your first peep and I went to a corn maze and got terribly lost in it.  Eventually, when we did find our way out, the people running the maze were leaving for the day.  We made it out in the nick of time.  Had we not escaped, we might very well have been left in that maze overnight.  We were really lost.  It was pretty worrisome."

Hmmm...  I thought.  Do I believe any of this or is it just more nonsense?  I asked the first peep if she could verify peep #2's statement and lo and behold, she could.  MOUSES!

So I had my story after all.  CORN MAZES ARE DANGEROUS TO THE HEALTH OF PEEPS!  Especially peeps like mine who clearly have no sense of direction.  Peeps, bein' peeps, can in fact get lost in a corn maze.  Who knows how many peeps have been lost to corn mazes across this country?  It's a big country.  There are a lot of corn mazes.  And to make matters worse, there appear to be no statistics on corn maze related peep losses.  A cover-up?  A conspiracy?  Inquirin' minds are gonna wanna know! 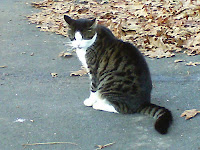 Peepers!  Prepare my teleportation device.  I have a corn maze to visit.

Oh yeah, almost forgot...  How could I forget?  Talk about mouses.

HAPPY THANKSGIVING TO ALL and to all a good night!

Posted by Seville at Nerissa's Life at 09:57