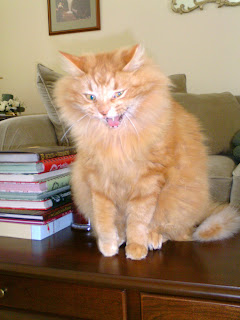 Ol' Peepers has gone and done it again.  That's right...  She has gone and committed herself to another term of caterwaulin'.  If you ask me, she should have herself committed.  Or perhaps I should have her committed.  I'm sure they'd take her.  If they came within' earshot of the caterwaulin', they'd take her for sure.  Or maybe not...  maybe they'd turn and run for the hills.

Shortly after dinner that night, Ol' Peepers grabbed her purse and car keys and headed out the door.  It was a Wednesday and I have learned over the years that havin' Peep #1 go out on a Wednesday evening does not bode well for me.

Suspicious, I ran to the calendar.  Not being tall enough to actually see the calendar, I called over to  my brother Rushton to give me a boost.  Rushton is a very big boy, you see.  As a kitten, when the other cats told him he looked like a lion, he kind of took it to heart and decided he should grow lion-sized.  He hasn't quite made it there, yet, but he's still workin' on it and has come pretty darned close.  I climbed onto Rushie's shoulders and he stood up on his two hind legs.  From there, I could easily see the entire calendar and all that was jotted down upon it.

On the calendar, I saw two words.  The most dreaded and feared two words in a cat's vocabulary...  Choral Society.  MOUSES!

Of course, the peep had misspelled Choral Society.  I believe it is actually an acronym and therefore should be spelled using all capital letters.  CHORAL is an acronym for Caterwauling Heard Over Rivers and Lakes...  not to mention fields, forests, mountains and valleys. 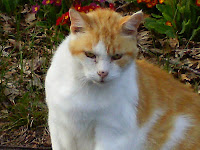 And oceans!  We mustn't forget the oceans.  I know that when my peep caterwauls full force, the raucous and offensive noise can be heard across the Atlantic.  I know this for a fact.  Once, when Ol' Peepers was practicin' her caterwaulin', we got a call from Scotland Yard.  They thought someone was bein' murdered or somethin'.  Yup, it's true.  You might think that I'm tellin' tall tales but really, I'm not.  My peep's caterwaulin' really is that bad.  But I digress.

Staring at the two words - Choral Society - I reeled back in horror.  I reeled back so far I fell off Rushton's shoulders and landed on my tail.  Ouch.

Now you might wonder why I'm gettin' all hot under the collar about this caterwaulin' business, especially since I don't actually wear a collar under which my fur might get hot..  or ruffled.  You might be thinking that as long as she's leavin' the house to caterwaul, my ears will be safe from the auditory assaults of such magnificent proportions.

Well think again, my friends.  You see, the actual practises might take place elsewhere but before she goes to practise, she practises.  It's the pre-practise practises that are the worst.  The low grumbly F's and G's are well... well...  well they're not too bad, I suppose.  They're just stupid sounding 'cause they're so grumbly.  Then there's this middle range that can easily be drowned out if one places one's head under a few dozen pillows after donning some high-tech earplugs.  But it's those higher notes.  Those ear-piercing, wall-crumbling and glass-shattering higher notes.  Those higher notes are enough to wake the dead and cause them to wish they were dead again.  Those A's and B's and the horror of the C's.  THE HORROR OF THE C'S!  They're just too much for a kitty to handle.  MOUSES!

And yesterday, my fears all came to life.  My fears of the pre-practise, practise.  Ol' Peepers went into the livin' room where she opened the piano stool and pulled out...  pulled out...  she pulled out... sheet music!  "Have to practise my solo," she happily informed me.

I ran.  I ran out of the living room and straight downstairs to find something under which I could bury my head.  Turns out, heading down one set of stairs isn't far enough.  I'm thinkin' of building myself a sub-basement.  A sub-basement with an elevator that will take me down a couple more levels to a sub, sub-basement.  I'm thinkin' that might work.  I'm hoping.  I'm praying.

In the meantime, I hear that my dad happily hopped up onto the piano stool to hang out with the peep while she practised practising her caterwauling.  He's such a suck-up.  Either that or he's stone deaf.  I'm kind of thinkin' the latter.  How else could he tolerate it?  MOUSES!

Posted by Seville at Nerissa's Life at 11:37