I thought I saw a puddy cat... 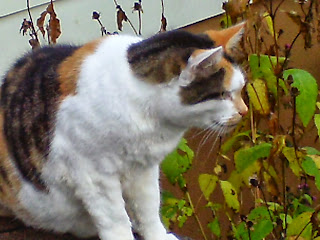 ...who thought she saw a squirrel!

ATTENTION:  We interrupt our regularly scheduled programming for...  SQUIRREL TV!

Wow oh wow.   I never ever thought I'd see it happen but the other day, there was a squirrel in my backyard.  MOUSES!

Just what is so crazy 'bout Squirrel TV?  Well, for starters...  it has never before happened in my backyard.  In the front yard, sure.  Squirrel TV is on from dawn to dusk in the front yard all summer long but never out back. 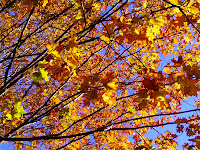 Those squirrels have always liked the big ol' oak tree at the end of our driveway.  They're there all the time.  They run up the oak tree and then back down.  Then back up again and once more, back down.  Sometimes they run straight up.  Sometimes they kind of run around the tree trunk, almost going in circles around the tree.  It's pretty fun to watch, actually.  Squirrel TV has some great programming on at this time of year.

But never before has Squirrel TV appeared on the channel in the backyard.  Up until now, that channel has been reserved for Bird TV.  Somethin' weird is in the air, I should think.  In the air...  on the ground...  everywhere!

Never before have the squirrels been out back but lately, they've taken a liking to some of the trees out there.  It's weird 'cause in the backyard, there are no acorns, you see.  There are a couple of oak trees but for some strange and unfathomable reason, they almost never produce the 'corns.  That would be one reason why Squirrel TV has never before appeared in my backyard.

The other reason would be my family.  I mean...  I do live with ten other cats.  A squirrel has gotta be pretty nutty to venture into a backyard belongin' to eleven cats.   A squirrel willin' to do that would have to be crazy.  Absolutely crazy!  Crazier than all the other squirrels makin' nut pies, I should think.  And that's pretty mousin' crazy, if you ask me. 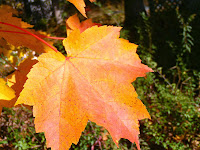 Now one might say that squirrels are kind of inherently nutty and I would have to agree with you on that.  It's a proven fact, you know.  Allow me to impart a little bit of squirrel law to you.  Squirrels inherit nut trees from their parents and the nuttiness is passed down from generation to generation.  An oak tree can live for many squirrel generations and it, along with all the acorns it produces, belong to the direct descendants of the squirrel who planted that first acorn.  Squirrel Law 101.  I aced that course...  of course.

And the squirrels coming into our backyard are grey.  They're grey and they're big.  As big as my sister Tess.  I kid you not.  They're the big ol' grey squirrels that have sort of invaded Nova Scotia but up until now, my backyard has escaped the invasion.

Well let me tell you Mr. and Mrs. Grey Squirrel...  my sister Constance knows who you are and she knows where you live.  She was out sunbathin' the other day and saw you running about in our backyard and she's not happy 'bout the situation.  She's not happy at all.  You had better watch out for my sister, Connie.  She is a force with which to be reckoned, for sure. 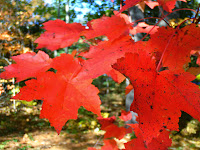 Mr. and Mrs. Grey Squirrel, you may have chased away all the little red squirrels from our neighbourhood but my sister is no red squirrel.  She's not gonna be chased so easily.  Nor am I.  Nor are any of us.  We're ready for you and we're prepared to do battle.

I'm applying for a court injunction as I write this blog post.  I have proof that your ancestors did not plant the acorns that produced the two oak trees in my backyard.  Those trees predate the invasion of the grey squirrel so clearly, someone else planted them.

What's more, my back and side yards have mainly maple trees - not oaks - and you have no claim over any of those maples.  Squirrels may never lay claim to a maple tree except, in rare instances, when the branches of said maple are an easement to access trees you do in fact own.  But in this case, easements do not apply 'cause you don't own any of the other trees back there.  Ipso facto, you have no right to be anywhere near any of those maples.  No right to be anywhere near them at all. 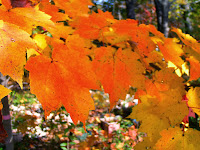 I am confident that the court will rule in my favour.  I hear that Judge Jay is presiding over the case and even though he has been feeling rather blue, as of late, he's gonna perk right up when he sees the opportunity to bring Bird TV back to the airwaves in my backyard.  Yup, that's gonna perk him right up for sure.

So enjoy broadcasting your Squirrel TV in the backyard for the next few days my friends but by the end of this week, we should be back to our regularly scheduled Bird TV on that channel.  If I wanna watch you squirrels, I'll sit out front 'cause out front is the appropriate place for Squirrel TV.  That's a fact, for sure.

Come on over kitties.  There's plenty of room.  I'll have the peep pop up some corn and we'll slather on the butter and sprinkle it with a little nip.  Yummy.  And maybe afterwards she'll serve up a little roasted squir...  Nah, she probably wouldn't do that, bein' a veggie and all.  Perhaps she'll serve up a little nut pie.  I hear the squirrels have some great recipes.  Wonder if they'll share...

Posted by Seville at Nerissa's Life at 11:40