as old as the hills

Bein' an investigative reporter and a member of the Feline Bureau of Investigation, I set out to determine just how old the peep would be turning.  It wasn't easy.

Apparently, her age is top secret, known only to a select few on the planet.  Birth certificates have been tucked away in locked drawers to which there are no keys and witnesses to the event have been silenced.  I knew the truth was out there, somewhere, but where?  WHERE?

Then I realised that I already knew...  kind of.  I've always known that my peep #1 was as old as the hills.  I've said it more times than I remember.  I've said it more times than the peep cares to remember.  I concluded that all I needed to determine was the age of the hills.  Then I would know the age of the peep, as well.  So I cried aloud, "Internet, don't fail me now!" 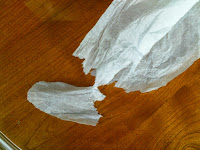 Firstly, I needed to identify the hills.  We live in a valley so there are hills to the north of us as well as to the south.  I discovered that the North Mountain was formed in the Triassic Period and could be anywhere between 200 and 250 million years old.  Hmmm...  could my peep be that old?  What about the South Mountain?  Turns out that that one is even older.  It was formed during the Devonian Age and is between 360 and 420 million years old.  Could my peep be that old?

Are there any younger hills here in Nova Scotia?  Younger hills to which my peep's age could be compared?  How 'bout those mountains in Cape Breton about which I've heard.

An investigator's work is never done and I immediately set out to find the age of the Cape Breton Highlands.  Ol' Peepers was gettin' older by the minute.  I found references to those mountains bein' as young as 750 million years old.  The word billion was mentioned, too.  MOUSES!

To be honest, I'm not quite sure how accurate my sources are.  Peep #1 doesn't look a day over 500 million. 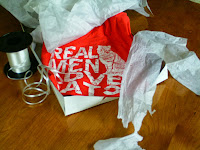 I was back to square one.  She's as old as the hills and the hills are pretty old.  That's all I know.  Again I say, MOUSES!

Anywho...  I figured that if Ol' Peepers was THAT old I had better get her a prezzie or two.

As luck would have it, I already had one on paw.  Not that long ago, I was the lucky winner of a t-shirt from RC Tees.  I won it in a giveaway over on my pal Layla's blog, Cat Wisdom 101.  Since I myself don't wear clothes - 'cause I'm a cat - I figured I could give the peep the shirt.  What a plan!  WHAT A PLAN!

All I needed to do was wrap it.  So I snuck into the little craft / sewing room that's not much bigger than a closet and dug out a gift box, tissue paper and some ribbon.  This was a mistake on my part.

Let's just say that the spool of ribbon was confiscated by the peep before I could use it, the tissue paper has been shredded and the box has seen better days.  I had the best of intentions but...  but...  BUT I JUST COULDN'T HELP MYSELF!  I mean...  there was tissue paper and ribbon and a box...  What do you expect from a cat? 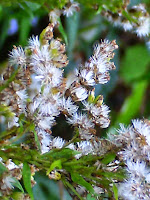 I did however, manage to keep the peep from seein' the t-shirt.  Thank goodness for that.  She will get her prezzie and it will be a surprise even if it isn't wrapped.

And as a bonus prezzie, I'm gonna toss in some seeds, as well.  I sent my brother Rushton out to gather them.  Those weeds the peep was tryin' to grow in the ditch are settin' seed and my brother was able to brush his big floof of a tail all over the seedy weeds and collect 'em .  We gathered the goldenrod seed, brought them into the house and smooshed them together into a little pile which we then pushed under some stuff where the peep will never look.

Of course, I did consider putting 'em in a gift bag but Rushton was quick to point out that a bag wasn't gonna fair much better than boxes and tissue paper so, in the end, we decided to settle on just putting 'em in a pile.  Sure do hope Ol' Peepers doesn't decide to do somethin' stupid like vacuum or dust or whatever. 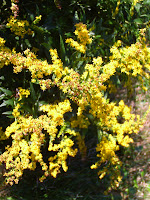 And there might be another prezzie or two comin' her way.  We still have two days.  A lot can happen in two days, you know.  One never knows what eleven cats might come up with in two days.

We've also all decided to take a pledge to try really, really hard on the peep's birthday to be nice to her and well-behaved.  We're not makin' any promises.  There are no guarantees.  The pledge is to try and that's about as good as it gets.

But it won't be as difficult as it sounds.  There are only twenty-four hours in a day and we'll probably spend at least eighteen of them napping.  It's pretty easy to be good while you're napping.  And since the peep is quite possibly 500 million years old, she'll probably be in need of a nap or two, too.  And when the peep's asleep...  Well, never you mind.  That's for cats to know and peeps to only possibly find out.

Anywho...  if you happen to talkin' to the peep the day after tomorrow, you might wanna wish her a Happy Birthday or somethin'.  But be sure to raise your voice really loudly and speak super clearly when doin' so 'cause...  well...  'CAUSE SHE'S AS OLD AS THE HILLS!

Posted by Seville at Nerissa's Life at 10:17