it's really not nice to lie

Personally, I never lie.  Never.  Not even once have I lied.  Never even thought about it.

You see, this is where peeps go wrong.  They do something they shouldn't do and then they lie about it.  Usually what they've done is bad and I suppose that that is why they wanna cover it up.  They wanna cover up their badness or at least, their bad behaviour.  I guess they're ashamed of it or something.

What peeps need to understand is that when they lie about doin' whatever they shouldn't have done, it makes everything worse.  I think they think their lies will be believable and no one will question them.  I think liars think all the other peeps are really stupid.  The liars seem to think they're smarter than everyone else.  It just goes to show you, people who lie, lie to themselves the most.

Lying peeps try to use even more lies to dig themselves out of the holes made from the original lies but the thing is, lies aren't for diggin'.  If you wanna dig yourself out of a hole, you need a shovel and some good strong bracin' material and the stamina to dig yourself a tunnel with a gradual incline.  Lies don't help with any of that!  If anything, lies are gonna 'cause your tunnel to cave in.  Yup, the weight of all those lies will cause everything to collapse like a house of cards because you see, lies are really heavy.

Lies weigh everything down.  They even weigh down the shoulders of the peeps telling 'em.  Lies are so heavy that peeps telling 'em are likely to be walking around all slouched and whatnot.  They can't hold their heads up in public anymore 'cause the lies are weighin' so heavily upon their shoulders.  They can barely even lift their eyes.  Have you ever noticed that when peeps lie, they won't look straight at you?  Yup.  A sure sign of a liar, that.

Sometimes you'll find a rogue liar but more often than naught, you'll find them congregatin' like fleas in a circus.  When I first noticed this phenomena I thought that perhaps the liars were simply attracted to one another however, with further study I realised that this could not be the case.  I mean...  with all those lies floatin' around the liosphere, how would the liars ever be able to keep track of which liar was tellin' which lie?  That would lead to chaos, for sure.  Chaos of parliamentary proportions.  No...  these congregating liars must all be party to the same lie.

You see, lying is contagious.  It's true.  The lie originates in the mind and heart of the primary instigator and then spreads throughout the ranks of the liars like mist on a moor.  Secondary and tertiary peeps are forced to create new lies to cover the tracks of the primary liar, protecting his or her reputation, in order to avoid scandal.  When discrepancies are discovered in the first lie, the ranks close in with more lies tryin' to seal those cracks before anyone notices.  It's a never-ending cycle and the lies and number of liars grow, exponentially.  Not to mention their noses. 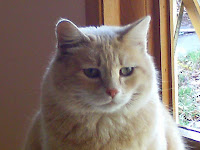 It can all be very confusing however, eventually, the truth surfaces.  The truth always surfaces.  Truth is light, you see.  The truth finds its way up through the cracks of the lies and floats to the surface, revealing all.  And once the truth is out, it shines down upon the lies and the liars, exposing them to the world.

So the question must be asked.  If one does one thing that's a little naughty, is it not best to simply admit the naughtiness right there and then?  Come clean, so to speak?  Sure, you did a bad thing and you might even be punished for it but if you try to cover it up with lies, you end up doin' even more bad things.  Lying is bad, you see.  Lying is naughty.  You're not supposed to lie.

We cats understand that lying is an unacceptable form of behaviour and that's why we don't do it.  On the other paw, we don't really need to.  I mean...  if I do something naughty, it almost always comes across as cute.  Cats are cuteness, personified, you see.  Peeps just aren't.  They don't even come close.  Guess that's why some of them think they have to lie.  I guess they think that the only things that will cover up their bad behaviour are lies.  Hmmm...  Could be.

When I wanna cover up my bad behaviour, all I need do is twitch my whiskers or touch my nose with my tail or even just sit there in my house, looking adorable.  Peeps just can't pull that kind of cuteness off.  That must be why they lie.  They shouldn't, though.  They really shouldn't 'cause...  it's really not nice to lie.

Posted by Seville at Nerissa's Life at 11:33