So this is what she did this time...

We used to have two hedges by the driveway but a couple of years ago, ol' peepers got rid of one although, truth be told, I see bits and pieces of it tryin' to come back.  Those hedges are tricky characters, you know.  They're real tricksters, for sure.  Gotta keep a watchful eye on 'em and tell 'em who's boss and whatnot.  Never trust a hedge.  But I digress...

Yesterday morning, peep #1 announced that later that day she was gonna trim the remaining hedge by the driveway.  The hedge she kept.  I'm thinkin' she might be reconsidering that decision right about now.  Actually, I'm thinkin' she might be reconsidering both decisions.  The first one, to keep the hedge and the second one, to prune it yesterday.

It was about three o'clock in the afternoon when ol' peepers started hauling stuff out of the garage.  First came them the electric hedge trimmer thingy and then the outdoor electrical cords.  Then she started attaching things here and plugging in things there.  Right off the bat I could tell I was in for a show.  I watched from inside, however.  I know from experience that those electrical hedge trimmers are super loud and, as you all know, I have very sensitive ears.

Anywho... the peep revved up her trimmers and went at it.  Things were running smoothly...  at first.  She started over at the far end of the driveway, down by the road, where the hedge was shorter.  I don't know why it was shorter down there.  Just was.  Actually, it still is.  Yeah, I never said my peep was good at trimming the hedge.  Only said she was gonna do it.

So she trimmed that hedge this way and that way.  From right to left and then from left to right.  For a moment I thought she was wavin' a flag out there or somethin' but then I realised that no, she was just waving around the trimmers.  Then she went up and down the sides of the hedge.  Side to side and then from the ground, up.  Never from top to bottom, though.  Think that's a safety thing or somethin'.

At one point, a neighbour passed by and called out, "Be careful with those things!"  Scared the livin' daylights out of my peep.  NEVER STARTLE A PEEP WEILDIN' ELECTRICAL CUTTING EQUIPMENT.  Just sayin'...

I immediately saw that she was gonna have a problem.  I think ol' peepers saw it, too.

You see, although not a short person, she's also not a tall one.  She says she is of average height; five feet, four and a half inches.  To be honest, I've noticed that peeps who are truly of average height, don't make such a fuss over that extra half-inch like she does.  I think that might mean she's short. 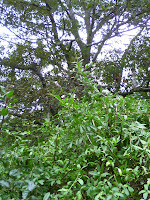 But more to the point, the hedge was tall.  At least, it was taller than her.  Still is, in fact.  And in some places it's a lot taller than her.  Remember, not once did I ever say ol' peepers was good at the trimming of the hedges.

So she managed to trim the sides, all right.  She even managed to trim up the outer parts of the top but there was still this strip of tall stuff left down the centre of the top of the hedge.  Let's just say it's a good thing I invented that ol' saying, friggity-frack der quack-der-knack!  You know the one.  The one for when MOUSES! just isn't enough.

Then she hauled the step stool outside and climbed up on that.  This allowed her to trim up a little more of the top of the hedge but there was still some left.  Clearly, she couldn't get the step stool close enough to the hedge to actually help her.  The ground there was just too uneven and the stool was gonna topple.  What to do...  what to do...

Also, the trimmers kept on jammin' up on her.  Little pieces of hedge were gettin' stuck in its teeth and every time that happened, the peep had to climb down from the step stool, unplug the trimmers and remove the bits of hedge.  I heard MOUSES! bein' uttered, more than once.

Finally, peepers gave up on the step stool.  I think she realised she needed to get closer to the problem at paw so she tried to become one with the hedge.  Yeah, you heard that correctly.  She practically disappeared inside the thing.  She pushed herself into it until it almost swallowed her up.  That was when ol' peepers made the most progress.  Piece by piece, the disobeying bits of hedge toppled over.

Finally, ol' peepers proclaimed that the hedge had been trimmed.  It wasn't perfect, mind you.  Not even close but good enough for her, I guess.  It looked like it was gonna rain and she knew she had to finish up with the electric trimmers before that happened.  So she started hauling everything back into the garage and the house. 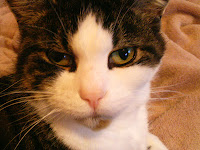 Perhaps from her vantage point she couldn't see them.  Perhaps she didn't want to see them.  But I could see them.  I could see those two branches sticking up there in the middle of the tallest part of the hedge.  I can still see them, in fact.  I can them while I'm sitting here at my computer, writin' my blog and lookin' out my office window.  Plain as day, they are.  Should I tell the peep?  Should I mention her mistake or just let her discover it all on her own.  Hmmm...

And should I mention that other thing I noticed?  Should I mention that I noticed how she left the car windows partially open yesterday?  Or should I just let her discover that on her own, too?  She'll probably figure it out when she goes to use the car later today 'cause...  well...  after she finished sort of trimmin' up the hedge...  it poured.  MOUSES!

Posted by Seville at Nerissa's Life at 11:40