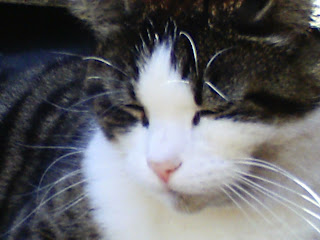 I enjoy watchin' television as much as the next cat.  I love watching The Big Bang Theory with that cat named Sheldon.  Yes, you read that correctly.  I have a theory that Sheldon is, in fact, a cat.  He shows all the signs, save one.  He's afraid of birds.  That's not very catlike.  I think it might be just an act.  An act to divert our suspicions, elsewhere.

Of course, I love a good mystery.  I like doin' a little investigating myself and much of what I've learnt about investigating has come from watching television.  I'm not a real private investigator...  I just watch 'em on TV.  Actually, I'm not a real private investigator, YET.  I'm pretty sure that I actually have what it takes to be one.  Just gotta get my license, that's all.  Dogs get licenses all the time so I can't imagine it will be difficult for me to get mine.  Right?

I also enjoy some of the shows on PBS.  Nothin' like spendin' a Sunday evening, cuddled up to a peep or two and gettin' scritches and tummy rubs while watching Masterpiece Theatre.  Excellent stuff, that is.  Simply excellent.  And good for at least a couple of hours worth of quality peep time.

But the best TV of all is Bird TV.  Actually, my bird TV isn't on TV.  I get the real live stage performances.  Contrary to the opinions of some stupidy-dupidy-dupes who make up studies with stupid made-up facts, I am a cat who likes to watch birds.  I don't eat 'em.  I just watch 'em.  I watch 'em on my Bird TV. 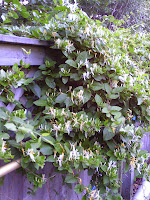 Oh, I'm sorry...  I do sometimes eat birds.  Turkeys are birds, right?  I have turkey for breakfast almost every day but it comes out of a tin.  I don't go around catchin' turkeys in the garden.  Plus, even though my peeps never eat turkey 'cause they're both a couple of veggies, I wouldn't be at all surprised if those stupidy-dupidy-dupes with the studies made up of made-up facts, did.  Maybe they don't know that turkeys are birds?  Hmmm...  it's a possibility.  But if they can eat turkey, so can I.

Anywho...  back to my Bird TV.  We have some excellent bird programming goin' on in my garden.  Every afternoon, we have the Crow Show.  Wonderful program.  No repeats, either.  I guess that's what one might call a daytime soap.  My peep #1 used to watch Another World but that was way before my time.  It got cancelled or something.  No one is cancelling the Crow Show, though.  No one would dare.  My fur family and I love it far too much for that.  It has really good ratings.  All twelve of us watch it almost every day.

But one cannot live on the Crow Show alone.  No, variety is the spice of life and we need a little variety in our programming of the Bird TV.  That's why my peep #1 plants stuff in the garden to attract the birds.  She dresses the set, so to speak.  There's all sorts of stuff out there that keeps those birdies coming back, day after day after day. 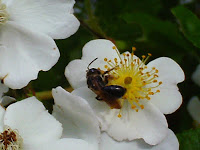 The honeysuckles bring the hummingbirds every year.  There are other flowers they like, too, but when the honeysuckles are in full bloom, there's special programming all day long.  It's like a honeysuckle marathon or something.

Then there are the multiflora rose bushes.  That show is only on during the late fall and early winter months.  In early summer, the bees come along and pollinate the roses but that's not the main show.  The main show is broadcast when the roses decorate themselves with little rose hips.  Hundreds of them.  Maybe even thousands!  The birds really like those rose hips.  They devour them with relish and no, I don't mean the green stuff made from pickles.  MOUSES!

Ooh...  and then there's the ladybug bush.  We've got a whole hedge of the stuff which makes for fantastic television.  Okay, it's not really called a ladybug bush.  Only the peep and I call it that.  Ol' peepers only recently found out its real, botanical name which is super long and pretty much unpronounceable so she came up with ladybug bush 'cause the ladybugs all lay their eggs on it.  That's a good thing 'cause the peep and I like the ladybugs.  Some people call it nine bark.   I like our name better, I think. 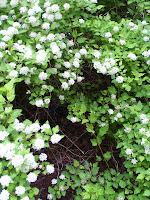 The ladybug bush had thousands of little flowers that are pollinated every year by hundreds of bees.  The bees are quite friendly.  I've never been stung.  Neither has the peep.  At least, not by a bee.  The trick is, to not upset 'em.  If you don't mess with the bees, the bees won't mess with you.  Never eat a bee.  That would be bad for your health not to mention, kind of stupid.  That's why I don't do it.  I'm not a stupidy-dupidy-dupe.

Anywho...  all those bees pollinate all those flowers and in the winter, there are tiny little seed pods, everywhere.  And that brings the chickadees!  The chickadees are my favourite acting troupe.  They put on excellent performances.  They flit this way and that.  Their show is always fresh and exciting.  Such fun!

Posted by Seville at Nerissa's Life at 09:55