E = mc2 where E is the catnetic energy of a moving object and equals the mass of that moving object times the speed of the swipe of a cat's paw, squared.  Got that?  Good.

Actually, the light could be going somewhere.  The light in question could be the object with the mass that is being swiped by the cat's paw.  It has happened before.  Many a lamp has been knocked off a table by a cat.  But obviously, those peeps are putting the light in the wrong part of the equation and I bet they never once put the lamp on a scale to get its mass.  MOUSES!

Albert Einstein came up with his own version of this equation.  A humanised version, so to speak.  For some strange reason, it is his version peeps teach in schools.  I am very grateful and proud to say that I was home-schooled by my mama where I was taught the basics of special relacativy.  I would never have learnt the important stuff had I gone to regular peep school.  I bet those peep teachers don't even know the basics of special relacativy.  MOUSES!

Peeps make a big deal about the inclusion of the speed of light in their version of this theory.  They keep talking 'bout how it's important 'cause the speed of light is constant.  As I discussed earlier, the light isn't movin' so if that means it's constant at zero, I guess we can let the peeps have that one.

And don't you just love it when the peeps get all fancy-schmancy and start sayin' things like, "the speed of light in a vacuum?"  They think they sound all important sayin' stuff like that but let me tell you something.  We have more than one vacuum in our house.  I don't like 'em but we have 'em and I checked 'em all.  Yes, I looked inside of all three of those vacuums and I did not find a single lamp, flashlight or even a light bulb.  Not even one of those teeny-tiny Christmas tree lights.  Speed of light in a vacuum?  MOUSES! 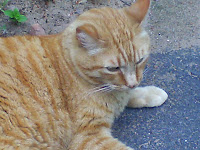 Obviously, the speed of the swipe of a cat's paw is not constant.  Some cats like to whack stuff with great force while others are nudgers.  I, myself, enjoy a little of both.  You know what they say.   They say, variety is the spice of life.

And you can certainly understand how this all plays out.  Let's say I give a ball a great big ol' whack.  Well, that ball is gonna have a lot of catnetic energy when it hits the wall, right?  It might even leave a mark or something.  If I take that very same ball and just nudge it towards the wall, there will be very little catnetic energy.  It might not even bounce back.  Might not even have enough energy to do that.  Pretty interesting, huh?

I would like to add that the mass of the cat has nothing to do with the principles of special relacativy other than the possibility that a heavier cat might have a stronger paw swipe, thereby increasing the value of 'c'.  Other than that, the mass of the cat is irrelevant.  So kitties, if you wanna chow down a second helpin' of the Fancy Feast, by all means, do so.  It won't 'cause any issues with teleporting.

Yes, teleporting.  That's what it all boils down to.  Special relacativy has been used to enable cats to teleport all over the world.  The greatest scientific cat minds of the last several generations have used the principles of special relacativy to allow us cats to travel from here to there in mere seconds.  The concepts of time and space and of space and time have become one.  We cats have merged time, space, mass and energy, creating devices to allow us to travel through both space and time with limited energy and teleport to our hearts' content.

To my knowledge, peeps have no teleportation devices.  So exactly where did their version of the theory get them?  Nowhere, that's where.  They're still tryin' to figure out how to move the lamps.

Posted by Seville at Nerissa's Life at 12:00