That peep #1 of mine tends to be a rather docile creature but every now and then, she goes all lumberjack on me.  One doesn't find a lot of docility in a lumberjack, I should think.

I can always tell when the peep has a lumberjack attack 'cause out come not only the clippers but also the saws.  Well...  saw.  She's not a very well-equipped lumberjack.  Good thing, too.  Her lack of sawin' equipment is the main reason she still has ten fingers and toes, I suspect.  That's ten of each, not combined.  Thought I should clarify that.  Not much harm can be done with a small saw that's only a foot or so long and yes, she still has two feet, too.

The lumberjack attacks don't happen very often but when they do...  well...  let me tell you 'bout yesterday.

I was busy takin' a nap in the family room when my dad came in to tell me the news.  He thought I should know that peep #1 was out at the front, clippers and saw in hand.  Clearly, a lumberjack attack was on the horizon.  That was my cue to go outside and supervise.  One needs to keep a watchful eye on the peeps, you see.  They get into too much mischief if you don't. 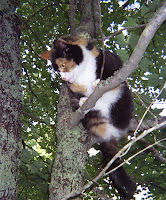 So I headed on out to the front and what did my supervising eyes see?  They saw the peep hackin' away at one of the cedars near the veranda.  Strewn about the pathway, were little bits of cedar.  Little bits of cedar were everywhere!  Well, everywhere on the ground, that is.  The cedar closest to the path was practically bald.  Where there had been lots and lots of green before, all that was left were gnarly old brown branches.  It was one of those branches she was hackin' away at.

I felt my eyes startin' to burn a little at the sight.  A few tears started to form and I brushed 'em away with a paw.  The peep was destroying my cedar.  Destroying my kittenhood play area.

Years ago, when I was a young lad of three or four months, I spent many an hour playing in those cedars.  It was a place of safety.  I felt secure tucked away inside those cedar bushes, sprawled along any one of their many branches and out of sight from prying eyes.  I was safe from other kitties and that mean ol' neighbourhood dog name Barkley who used to come over and chase us kittens when we were little.  He used to steal our food, too.  MOUSES!

Of the four of us kittens, I was the first to trust the peep.  Peep #1 would sit outside on the veranda every mornin', drinking her coffee and talkin' to me.  Sometimes she'd even bring out a toy or two.  It was then, I believe, that my addiction for the nip began but the peep meant well, I am sure.  Yes, the peep and I enjoyed many a nip-filled biff bag out on that veranda.

Quite often, it was just the peep and me hangin' out together out there.  Bein' at the top of my class, I was allowed to skip a lesson or two.  My mama would take Beatrice, Constance and Desdemona off for their lessons in the morning.  They'd head off into the garden somewhere to learn stuff whereas I would stay behind, waiting in the cedar bushes.  I was waiting for the peep to come out and play with me.

When the peep would step out onto the veranda, she would see movement in the cedar bushes.  The branches would sway as I climbed down from my perch.  Although I felt safe and secluded in those cedars, I always came out when peep #1 arrived.  I must have known somehow that she was the peep for me.

Peep #1 looked down at the branch on the ground and then over at me.  "Nissy," she said.  "The bush is old and starting to block the pathway.  I can't prune it enough without leaving branches that could hurt you or one of the other cats.  Besides, you're too big now to lie on its limbs.  It needs to go."

I looked at the peep and then at the cedar.  Then back at the peep.  How could she do this to me?

It wasn't long before the lumberjack attack wore off.  The peep stopped her hackin' and sawin' after removing about a third of that first cedar.  I'd like to think that she stopped 'cause she saw how upset I was but the truth is, she stopped once the green bin was filled up with the bits and pieces of my cedar bush.  Once the garbageman empties out the green bin tomorrow, she'll likely go back to lumbering once more.

She cleaned up all the little pieces of my bush from the path but the cedar itself is a right ol' mess.  You can see right into its heart now and there's not a lot of green left anywhere.  The second bush is unscathed but it's only a matter of time before that goes too, I believe.  I'm so disappointed in my peep.

The peep says she's gonna plant something nice in that spot once the cedars are gone.  Also those stupid little rocks that someone put there for a mulch, years ago, not to mention the black landscaping fabric that doesn't keep out the weeds but rather, gives the weeds something nice and solid to hang onto.  All that will have to go too, I guess.

All I know is that when the peep does re-plant the area, the planting had better include a nip plant or two.  Maybe even three.  Things look best when planted in odd numbers, you know.  Hmmm...  three nip plants.  Or five?  Five.  Five sounds good.  And I'm gonna need some of the nip to sooth my broken heart at the loss of my two cedars.  I'm gonna need some nip, for sure.

Posted by Seville at Nerissa's Life at 11:10