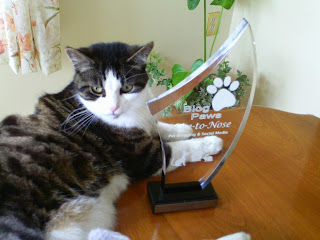 ...and it's all official now and everything.

It was two weeks ago, yesterday, when the winners were announced.  I wasn't there, of course.  I was still bein' held hostage in the livin' room because of recent knee surgery.  I was recuperating.  I was bein' held against my will!  MOUSES!

Peep #1 said I could watch the awards ceremony on the computer 'cause BlogPaws was live-streaming it.  I'm not quite sure what live-streaming means but I'm thinkin' it has something to do with salmon or something, swimmin' upstream.  So, due to the upcoming salmon convention, I made sure ol' peepers had plenty of salmon treats on paw.  They were delicious.

About fifteen minutes before the ceremonies were due to start, the peep turned on the computer.  Just as she was headin' over to the salmon stream from facebook, I heard the news.  All over the place, cats were saying, "Nerissa's Life won!" 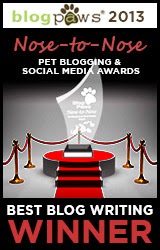 I was a little confused 'cause according to ol' peeper's time calculations, the ceremony had not yet begun.  I quickly did my own time travelling mathematical calculations and realized that, of course, the peep had screwed it all up.  I gave her a good ol' stink-eye before reminding her that, "time travellin' is for cats, not peeps."  You see, time travellin' is complicated enough, as it is.  Throw in a couple of time zone differentials tossed about with a daylight savings versus standarized time equation and you've got some pretty complex mathematical calculations.  Generally speaking, peeps can't handle the math.  So, as I said...  time travellin' is for cats, not peeps.  Never have any truer words been said.

I immediately went into a state of shock.  Not 'cause ol' peepers had screwed up the math.  No, I'm used to the peep screwing stuff like that up.  That doesn't shock me in the least.  Not anymore, anyway.  No, I was shocked 'bout the possibility that I had won the award...  the award I had wanted to win so much...  the 2013 Nose-to-Nose Best Blog Writing Award.  Even though twitter and facebook were all abuzz 'bout my having won, I could hardly believe it.  It just seemed so...  so...  so unbelievable.

But it was true!  It was absolutely true.  WOW.

As I mentioned before, I wasn't at the big BlogPaws conference.  Earlier in the week, I had asked my dear and wonderful friend, Savannah, if her mom would consider representin' me if I should happen to win.  Savannah is the author of the world-famous blog, Savannah's Paw Tracks.  You have heard of it, I am sure.  If - by some remote chance - you have not, you need to head on over right away.  It's a great blog and Savvy is an amazing author.

Anywho...  I knew that Savvy's mom was goin' to the conference and hoped she wouldn't mind helpin' me out.  I also hoped that Savvy wouldn't mind my borrowing her mom for the occasion.  I was so very pleased and honoured when Savvy's mom agreed to represent me and Savvy signed off on the deal.

Savvy's mom immediately went on a search for Plush Nissy.  Every cat has a plush version of themselves, you know.  These plush kitties are like our twins, or something.  Savvy's mom had already discovered Savvy's twin so, obviously, she has a knack for such things.  She went on a world-wide search and before anyone knew it, Plush Nissy had been found!  I must say, the resemblance is amazing.  Remarkable, in fact.  Peeps can hardly tell us apart.  Is it Nissy?  Is it Plush Nissy?  Is it Plush Nissy?  No, I think it's Nissy.  Yup, that's what they're saying.  Peeps, that is.  We cats can usually tell the difference.  We're kind of smart that way.

Luckily for me, the peeps running the BlogPaws conference had anticipated the time travellin' calculation screw-up of Peep #1.  They got the whole awards ceremony on tape.  Thank goodness someone was thinkin' ahead.  I got to watch the whole thing.  It was fantastic.  I actually watched it more than once.  Yes sirree...  it was that good.

Savvy's mom did the most amazing job.  She accepted my award like a real pro.  For a moment there, I thought I was watchin' a movie star acceptin' an Oscar or something.  Then I realized that winnin' the 2013 Nose-to-Nose BlogPaws Best Blog Writing award was better than winning an Oscar and that Savvy's mom was way better than any ol' movie star.  She was a star of stars!  Yup, she really was.  Still is, in fact.  Still is...

And did you know that I got a trophy?  It's true.  Savvy's mom packed it up and sent it to me.  The UPS man arrived a few days later with a parcel that had MY name on it.  That's right...  it was addressed to Nerissa the Cat.  How proud I was to open that box and find my new gorgeous trophy.  I've never had a trophy before, you know.  I got Peep #1 to display it next to the teeny-tiny little trophy she once won for growin' some flowers or something silly like that.  Mine is four or five times the size of hers.  Prettier, too.  Way prettier.  It's a way better trophy, for sure.

And did you know that I got a box?  It's true!  The trophy came in a box.  I've been in it numerous times, now.  It's an excellent box. 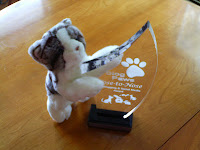 And I mustn't forget to mention the cat and dog food.  Two of the BlogPaws sponsors donated two hundred pounds each of cat and dog food to the winners' choice of charities.  That's right, Natural Balance Pet Foods and Petcurean both donated all that needed food.  I chose the Homeless Animal Lifeline, as the recipient for my award.  HAL is based in New Jersey but rescues animals from many other states, as well.  I know that the good peeps at HAL will put all that food to excellent use.  Those peeps work so hard at rescuing animals and do it so incredibly well.  If you've never heard of 'em before, please check out their website where you can read all about 'em some more.  And even if you have heard about HAL, you can still visit their website.  I'm pretty sure they love havin' visitors over at HAL.  Just love 'em, for sure.

So that's my big news.  My big new about BlogPaws and my award and HAL and how Savvy's mom helped me out in such a wonderful way.  Life is good, you know.  It's really, really good.  I'm a blessed kitty cat, for sure.

Posted by Seville at Nerissa's Life at 11:46