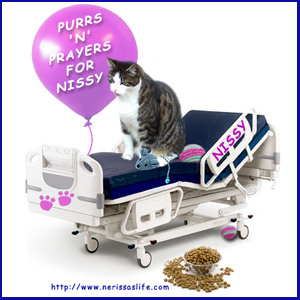 Well, the day has arrived.  Here I am, sittin' in my hospital bed, waitin' for my doctor to come and operate on my knee.  She's in the building, I understand.  She's supposed to be somewhere around here.  Probably operating on some other kitty right now.

My surgery isn't scheduled for another hour, I think.  Any moment now, a nurse is gonna come in and shave my knee.  Hopefully she won't be shavin' any other parts of me but just in case, I gave myself a really good bath, this morning.  I washed from the tip of my tail to the tips of my ears and everything in between.

Luckily for me, they allowed the peep to leave me my laptop.  They weren't gonna but ol' peepers explained that I needed it in order to keep in touch with my pals.  I explained it to them, too.  "I need my pals!" is what I said and I said it just like that.  Next thing I knew, I was bein' given the password so that I could log on with their wireless.  SWEET!

While I'm in the system, I might just see if I can create an electronic record of my doctor recommending my bein' served the Fancy Feast and those yummy Whiskas pouches, more often.  After I post my blog, I'm gonna see if I can figure out how to do that.  Bet I can.  Just gotta think about it for a bit.  And if I don't get it done this morning, I'll work on that after my operation.  I'll have plenty of time 'cause I don't think I'm gonna be goin' home until tomorrow, or something like that.

And speakin' of the Fancy Feast and the pouches...  I'm starving!  Yeah, I'm starvin' to death over here.  Literally!!!  I missed breakfast.  Gonna miss lunch, too.  Anybody headin' over to the burger place down the street or the chicken one at the corner?  I sure could do with a little somethin' for my tummy.  The peeps gave me my supper yesterday and then a snack later on but at nine o'clock all the food dishes were removed from the kitchen.  There was only water left.  A strappin' mancat such as myself can't survive on water alone.  Even prisoners get bread!  Not that I'd want bread but my point is that they get something.  Anything.  Actually, at this point, I'd even take the bread.  Did I mention that I was starving?

Anywho...  if you haven't heard by now, I had a little accident last Friday night.  Came in with a sore leg.  First thing Saturday morning, as soon as the clinic opened, peep #1 called and made me an appointment.  Dr. Teresa took some funny lookin' pictures of me.  They say that a picture says a thousand words.  Well, the two pictures she took of me said that I had torn all the ligaments in my right knee.  I think that means that there's nothin' holdin' my leg together.  That can't be good, you know.  MOUSES! 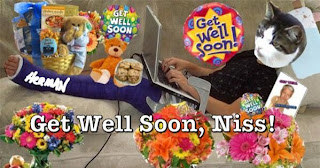 My doctor is gonna put some artificial ligaments in my knee to replace the ones I broke.  Hope they're of a better quality than the ones I had 'cause, as you might have heard, I tore those ones to bits.  Or was it shreds?  Either way, they're pretty much useless now so I need some new ones.

I heard the peeps say that I've got the best surgeon in the hospital.  Hope they're right about that.  I think they are.  My peeps wouldn't let a doctor who wasn't good operate on me.  I'm positive 'bout that.  They love me way too much to let anyone but the best near me!

And speakin' of bein' loved...  I've got some of the best pals in the whole wide world and they love me, too.  Just look at all the gorgeous cards I've received.  The top one was made by Maggy, Zoe and Ann.  You might know them as the Zoolatry Girls.  They posted this beautiful card of me on the Tabby Cat Club blog so that everyone would send me purrs and prayers today.

My BFF, Herman from It's a Wonderpurr Life, sent me the card showin' me workin' away on my laptop, publishing my blog and whatnot.  Yup, Herman knows you can't keep a bloggin' investigative reporter such as myself down.  Sore knees or not, I'm gonna get my blog to the presses!  The electronic presses, that is.

Last night, I recieved this stunning card from the lovely, and pretty stunning herself, Savannah or Savannah's Paw Tracks.  I just love how she shows me in her card how much she loves me.  Looks like she loves me lots!  Makes even a mancat like myself go a little pink in the ears.  Yes, it's true...  real mancats do blush.

My pal Cody from CAT CHAT sent me an e-card but I couldn't figure out how to post it here on my blog.  Apparently, tech support at the hospital is just as shoddy as what I've got at home.  Someone should write a book called "Blogging for Cats" or somethin' like that.  Hey, I'm a writer!  Maybe I should write that book.  I would, of course, have to bring in a technical expert.  Somebody who knows the techy side of the blogosphere.  Hmmm... 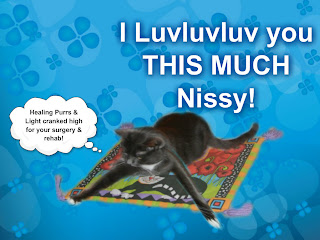 But all is not lost.  If you head on over to Facebook, I've pinned the card from Cody to the top of my fan page, Nerissa's Life.  It's a really neat card.  Musical and everything.

You know...  on second thought...  maybe I'll just skip this surgery thing.  Maybe I don't need it after all.  Maybe I've changed my mind.  I think I might just break out of this here popsicle stand.  I could teleport out, I think.  Peepers!  Prepare the teleportation device!  Peepers!  PEEPERS!!  PEEPERS!!!   Anytime 'bout now would be good.  Beam me up and out of here.  Oh...  MOUSES!