I just found out the other day that today, of all days, is the Chinese New Year.  I also found out that this great ol' year of ours - 2013 - is the Year of the Snake.  Well, truth be told, I already knew all that stuff.  I keep on top of all the newsworthy items of the world and whatnot, you know.  Besides, I had looked at the calendar earlier.  But what was news to me was that my very own Peep #1 is...  get this...  a snake!  That's right, she was born in a previous Year of the Snake so that makes her a snake, too.  Neat, huh?

So I looked up about the snakes.  One website listed lucky numbers and lucky plants for snakes along with a whole bunch of other stuff.  I looked up a Chinese Horoscope in the peep's magazine, too.  Research is very important for an investigative cat reporter such as myself so I knew I needed to research all 'bout these snakes.  Especially since I was livin' with one and all.

I was particularly interested in the snake's lucky plants.  I checked it out and the peep's lucky plants are cacti and orchids.  Hmmm....  she likes orchids.  She has grown a couple of cacti in her time but let's just say that maybe cacti are supposed to be lucky for her but she's not so lucky for them.  It is a very unlucky cactus, indeed, who ends up belonging to my peep.  From what I understand, they're pretty indestructable.  You couldn't kill one if you tried.  Maybe that's how the peep does it.  She doesn't actually try to kill them.  It just happens naturally.  The peep should write a book about it or something.  The Corpse of the Cantankerous Cactus.   Hehehe...  I like that.  I think I'll suggest it to her later.  Of course, if the peep was involved with the death of the cactus, there would be no mystery.  All paws would point directly at her. 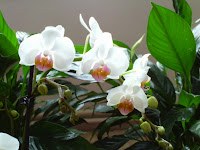 I kind of think the peep should stick to the growin' of the orchids.  In fact, we cats even got her a new one for Valentine's Day next week.  It's white with a little pink and very pretty.  But don't tell her 'bout it, okay?  The orchid is a surprise.  We don't want to ruin the surprise, right?  I think she'll like it though.  They bloom for weeks and weeks and weeks for her so she'll have the flowers for a really long time.

The orchid we got the peep is a moth orchid.  Hmmm...  the peep was just complain' the other day 'bout moths.  Oh-oh...  Let's hope that was a different kind of moth.  She found an old red coat of hers that was way at the back of the hall closet and it had a hole in it.  Now normally, when things have holes in them, we cats get the blame but this time we were lucky.  The peep is blamin' moths and said something 'bout needin' some cedar.  I don't really know what she's talking about.  Wait a minute...  maybe the peep is gonna plant a cedar tree inside.  We have some cedar bushes outside in my garden but it's winter here in Canada and cold and snowy.  We could do with an indoor one, for sure!  Hope she's not thinkin' of growin' it in the closet.  I don't think that would work.  No windows, you see.  But I digress... 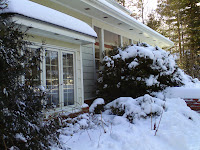 Back to the snakes.  Some of my research indicated that snakes are a creative lot.  I wasn't overly happy to hear that.  The peep is also a Libra and they too are supposed to be creative.  This is not good.  She'll be bragging 'bout her Libran snaky creativity all over the place.  I'll never hear the end of it, you know.  She'll be spoutin' snake this and Libra that...  MOUSES!  I say.  MOUSES!!!  Besides, we all know who the real creative genius is in this family is.  That would be me.

You know...  we have snakes livin' in our garden.  Some are green and some are brown.  All of them are pretty small.  My dad Jacob and my sister Constance like to catch snakes.  I'm not into that.  My dad and Connie will spend hours and hours and hours out in the garden, snakin'.  They don't eat 'em or anything.  They don't even hurt them.  They bring them home to the peep.  The peep then rescues the snakes and puts them back in the garden.  She puts the brown ones near the brush pile where they'll blend in with dead leaves and whatnot.  The green ones are released in spots where there's lots of green grass.  The peep is awfully intent upon rescuing those snakes.  She says they're good for the garden 'cause they eat bugs and stuff.  I wonder though...  could she think they're her kin or somethin'?  You know, from her snake side of the family. 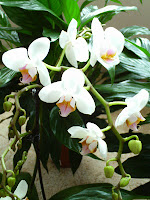 Do you know something else?  We have some of the peep's lucky orchids growin' outside, too.  They grow in woodsy spots.  Been there since before I was born.  They're called lady slippers, or somethin' silly like that.  I don't know why.  I've never seen a peep wearin' them on their feet, or anythin'.  I've never seen a fairy wearing 'em, either.  And fairies are way smaller than peeps so they'd be more likely to fit into those slippers.  What's more, fairies live in the garden all the time so the lady slippers would be convenient for them to pull on a pair when needed.  Although now that I think about it...  most fairies go barefoot.  They have wings so they spend far more time flying than walkin'.  That's probably why they don't wear shoes or slippers.

I just thought of something...  Snakes live out in the very same woodsy parts of my garden as those lady slippers and the fairies.  I sure do hope the snakes don't eat the fairies.  Maybe I should post a warning sign or somethin'.  Yeah...  I'll get right on that.  I'll ask the peep to hammer me up a sign post for posting.  Gotta run!