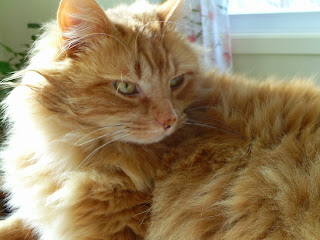 The other day, I wanted into the living room but the door was closed so, of course, I called for a peep to come and open it.  Any peep would have done but it was the first peep who answered my beck and call.  Before opening the door, the peep and I stood there for a moment, looking through the glass at my brother Rushton.  There he was, stretched out on the floor, lookin' as wistful as a wistful cat can look and staring at one of our new toys from Christmas.

The peep and I entered the living room and walked over to Rushton and the toy.  Immediately, we both knew exactly what was wrong.  It was broken!  Someone had broken it.  And it was lookin' like that someone was Rushton.

There was our beautiful new Catit Senses Circuit, lying on the floor with one of the dome pieces missing.  Well, it wasn't so much missing as it had been tossed to the side.  Most likely tossed to the side by Rushton.  The peep got down on her hands and knees, gave Rushy a good behind-the-ears-scritch to console him and attempted to fix the toy.  That was when she noticed that the ball that lives within the Catit Senses Circuit was missing.  A mystery for sure.  Duh, duh, duh, duuuuhhhhhhh......

Of course she couldn't fix our toy without the ball.  The ball is an intricate part of the toy.  That's the part we bat about sending it from one end of the circuit to the other and back again.  Where-oh-where could our little ball be? 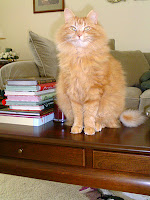 Since she was already on her hands and knees, the peep started crawling around the living room floor, looking for the ball.  Yes folks, she was crawling.  What a sight!  A funny sight, for sure.  Not the glorious sight Rushy and I were anticipating when she finally found the missing ball and fixed our toy but quite entertaining, I must admit.

The peep looked here and the peep looked there and she pretty much looked just about everywhere but then, out of the blue the peep said, "What is this?"  She was peering at something lying on the carpet and it was not the missing ball.  She peered closer.  "Is that...  no...  it couldn't be."  Yes, that is just what the peep said before adding, "and is that another one?  Are those really feathers?"

Rushy and I could tell that the peep was in total shock.  I just stood there, on all four paws, not darin' to move even a whisker.  Rushy jumped up onto the dining room table and feigned sleep.  He may have looked all innocent but I knew he was guilty of somethin'. 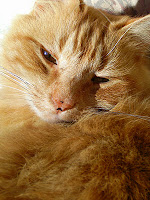 The peep continued to mutter stuff under her breath.  "Did someone catch a bird?  And they brought it into the living room without my knowing?  Could those nasty rumours started by that pseudo-scientific report on cats killing birds be true?  No, I can't believe that.  My cats aren't birders.  I refuse to believe I live with a dozen serial killers.  It just can't be.  I know for a fact that all twelve of our cats might catch a couple of birds between them in a year.  And that's in a good year.  Not a typical year.  In a typical year they don't catch any!  That nonsensical fluff piece about the Fluffies of the world was nothing more than a dangerous piece of junky science and ridiculous journalism.  No truth in it whatsoever."  Yes, my friends...  these are all things my peep said.  I swear on a stack of the nip that she said every single word.  The peep was on a roll, I tell you...  unlike our missing ball from the Catit Senses Circuit.  It was still missing.

The peep was still kneeling on the floor, looking at what she now knew to be feathers when something on the kitty condo caught her attention.  She reached over and touched the little sisal ball hanging from the lower level of the condo.  That sisal ball is a pretty neat toy, you know.  We got it for Christmas, too, and it's attached to the kitty condo using the magic of magnets.  The peep looked closely at this second toy and stated slowly, "I'm sure this ball used to have feathers," with used bein' the operative word.

Mystery solved.  We cats didn't catch a bird.  What nonsense!  No sirree.  One of us, however, did rip all the feathers out of the new magnetic toy.  I'm thinkin' it was Rushton.  I know it wasn't me.  I know that for sure.

As for the Senses Circuit toy...  the ball is still missing.  The peep thinks it's under the couch but hasn't bothered to pull the couch out to check.  I'm gonna send one of my sisters under there, later on.  Tobias and Tess are both little and will fit easily.  After the ball is retrieved, I'm sure the toy can be fixed.  Well, that toy can.  I'm not so sure 'bout the magnetic ball one.  I don't think the feathers can be reattached.  I think they're gone for good.  Oh well, you know what they say...  here today, gone tomorrow.  There's almost always a little bit of truth to every saying, I suppose.  Especially when you've got a brother named Rushton.

And just so you know...  Even though I've mentioned our wonderful Catit Senses Circuit toy by name, this was not a paid advertisement, or anythin' of the sort.  We got that toy from Santa.
Posted by Seville at Nerissa's Life at 10:47