As you know, I'm a Canadian kitty.  Many of us kitties, myself included, live in countries where we enjoy the right of free speech.  We get to pretty much say what we like, providin' it's not spreading hate or an out-an-out lie.  We're pretty lucky 'bout that.

But here's the thing...  just because we can say something, doesn't mean that we should.  Sure, there's lots of stuff we can say but we need to think twice before doin' so 'cause sometimes, that stuff just shouldn't be said.  We need to think about the words.  We need to ask ourselves questions like, are the words hurtful?  Are they distasteful?  We need to think about the consequences of saying those words.  Not just the consequences to ourselves but to others as well.   We need to temper our freedom of speech with kindness and wisdom.  We shouldn't just be spoutin' stuff off, like a mad garden hose out of control, all willy-nilly just 'cause the law says we can.  We're supposed to be smarter than that.

Peeps often say that words can't hurt us.  You all know how the saying goes...  Sticks and stones may break your bones but names will never hurt you.  MOUSES!  What a litter box load of poopies!  Words can hurt.  Words can maim the soul.  Words are not to be used unwisely.  Heads up all you peeps!  I've got a bit of biological knowledge to impart to you.  Your mouths are connected to your brains.  There's a reason for that.

So often peeps will say super-duper hurtful things and then hide behind the whole right to free speech thing.  And that's just what those peeps are doing, you know...  hiding.  And sometimes, other peeps will defend the ones doing the hurting 'cause...  you know...  the law says they have the right to do it.  At least, that's what they say....  Well my friends, it doesn't.  No where does any law say that you have the right to intentionally go around hurting others just 'cause you wanna.

A while back, my peep encountered a couple of these defender-type peeps.  They figured it was okay for this other guy to say hurtful things 'bout a whole group of people 'cause he had the right to say it.  If peeps didn't wanna hear it, they shouldn't listen.  Uhhh...  excuse me...  I don't know 'bout you peeps out there but my cat ears don't come with an off switch.  You say it, I'm gonna hear it.  Whether I want to or not.

My peep told me these two defender-type peeps were "a couple of ill-bred, ill-mannered young men who really weren't all that young anymore."  She said they "had the education to know about the right of free speech but lacked the intelligence to understand what that truly meant and the wisdom to know when and when not to exercise that right." 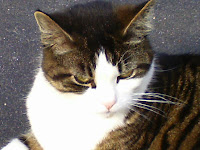 Now, you might be thinkin' that I'm being mean by repeatin' what my peep said 'bout these two defender peeps.  Well...  three things.  Firstly, I figure that if these two ill-bred and ill-mannered not-so-young men can dish it out so freely and all, they had better be able to take a serving or two themselves.  Secondly, I'm a cat and everyone loves cats so we get to pretty much speak our minds no matter what.  Not to mention the fact that we cats are almost always right 'bout...  well...  everything.  And thirdly, when we cats complete our mission of world domination - and it's closer than you might think - no one is gonna be questioning what we cats can and cannot say.  It's gonna be a world with yes sir, no sir, three mouses full sir.   Or somethin' like that.  Oohhh...  a day to which to look forward, for sure.  I'm purring just thinkin' about it.

I'm gonna end this post by quoting the immortal words of Bambi's mom.  At least I think it was Bambi's mom who said it.  I had to ask the peep 'cause I never got to see the movie myself.  Gosh, I must have had a deprived kittenhood or something.  The peep, being as ancient as the hills and all, says it has been a really long time since she saw the movie herself but thinks it goes something like this...  If you have nothing nice to say, don't say anything at all.   Boy-oh-boy...  Bambi's mom sure was a super-duper smart mom.  Smarter than a whole whack of peeps out there.  Don't you agree?

Posted by Seville at Nerissa's Life at 10:39