I could take him 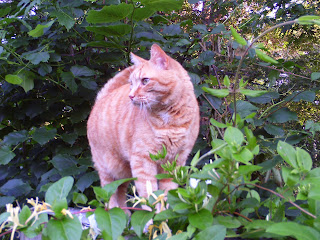 I could take him but I won't.  Santa is coming in less than two weeks and I'm doin' my very best to be on my very best behaviour and whatnot.   Don't wanna miss out on any prezzies or anything.  But...  I bet I could convince my brother Seville to take him on.  Seville is always up for a challenge.

Besides, it's not like he doesn't deserve it or anything.  The dog, I mean.  The little dog.  He doesn't know it but I saw what he did.  I just happened to be lookin' out the window when he did it.  Nothing escapes my watchful eyes.

I was sitting on the kitty condo in the family room, waitin' for the crow show to begin.  There was movement over in the cutting garden which caught my eye.  That's not the stage for the crow show so I wasn't expectin' any movement from over there.  I narrowed my eyes and peered closer into the garden.  And just what did my prying eyes see?  They saw the new neighbours' dog in my garden.  Well, the peep thinks it's her garden but what is hers is mine so...  it's mine.

Yes, there he was.  There was the little dog.  Or he might be a she.  I don't actually know.  To be honest, I don't think I really care.  He has been in my garden before.  The peep saw him once.  She told me all about it.  And who knows how many times he has been in there when we haven't seen him. 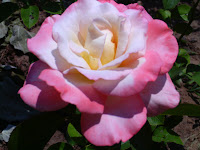 Hmmm...  I thought.  Just what is that little yapper-snapper, whipper-snipper, whack-a-doodley-doo doin' in my garden?  My jaw dropped in amazement when I realized.  Not the good kind of amazement like I was amazed he could do what he was doing 'cause I already knew dogs can do what he was doing.  It was the bad kind of amazement 'cause I was just amazed that he would do such a thing in my garden.  He was liftin' a leg and peeing!  Yes...  he was peeing...  in MY garden.  Did I mention that?  On one of the rose bushes, I do believe.

Then I thought to myself, this shouldn't really surprise me.  Nope, not one bit.  The dog just takes after his peeps.

One day a few months back, when the weather was warmer, my peep #2 was upstairs in the bathroom and just happened to look out the bathroom window.  What did the peep see?  The peep saw a grown man comin' out the side door, step a few feet away from said door and let all loose.  That's right...  he peed...  outside...  MOUSES!  The very next day, my peep #1 pulled into the driveway and she saw the very same thing.  What is it with these neighbours?  Do they not have litter boxes? 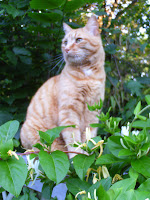 And this neighbour peep didn't seem to care who saw him doin' what he was doing 'cause he was doin' it in full view of not only my peeps but the street, as well.  Anyone could have seen him.  Maybe they did.  Maybe he likes people seein' him.  Hmmm...  I wonder if the two RCMP officers livin' nearby have heard 'bout this.  I'm thinkin' grown peeps are not supposed to pee in public.  I'm just thinkin' they're not.  Dogs on the other hand...

Dogs pee in public all the time but I sure do wish that this particular one would do it in his own garden and not mine.  I suppose it's not indecent exposure when the dog does it but...  littering?  Could be.  I'll have to have a think on that one.  Maybe I'll ask one of those RCMP officers.  The one who is practically my neighbour.  She and I are pals, you know.

In the meantime, I'm gonna suggest to my brother Seville that he might wanna explain a thing or two to that neighbour dog.  Yeah...  explain...  a thing or two...  with a paw or two...  a couple of paws filled with claws...  sharp claws.  Don't worry, I'll put in a good word for Seville with Santa.  I'll explain to Santa how Seville was just defending our property and whatnot from you-know-what.  Santa will understand.  He'll probably know I put my brother up to it, anyway.  The big guy in red seems to know everything.  MOUSES!