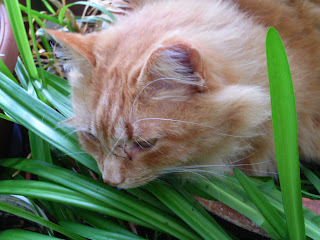 The peep #1 has some plants in the sunroom.  They're a bit of a nuisance, really.  I mean...  the sunroom is full of sunpuddles and those plants seem to always be occupying the puddles of sun.  Sunpuddles are made for cats, I think...  not plants.  Those plants are intruding upon our territory.  But that is the making of another post for another day.

Anywho...  today's post is about the pot of agapanthus.  Don't know why the peep keeps it.  It has never bloomed.  Not once.  Not ever.  Not even a hint of a flower or a bud or anything.  And as of late, it has stopped growin' too.  Not only has it stopped growing, but the growing has kind of gone backwards or something.  Where there used to be lush foliage there are now just little stubs protruding from the soil.

When I initially discovered the backwards movement of the growth of the agapanthus, my first thought was, of course, TIME DISTORTIONS.  What else would I think?  As plants move forward in time, they grow.  So if their growth is backwards, they must be movin' backwards in time.  I don't believe plants have a reverse gear like a car or a truck so...  obviously...  we're talking 'bout time distortions.

I thought to myself...  who would know about such things?  Who...  who...  who?  With a click of the claws I had my answer.  The Doctor, that's who!  I tried phonin' him but there was a poor connection.  It got lost in space or something.

Immediately, I thought of my peep and her caterwauling.  She had been practising a lot for those two caterwauling concerts of hers and as the sound waves from her caterwauling moved through the time-space continuum, who knows what damage they could have caused.  They could have warped the very fabric of space for light years all around us.  Plus, everyone knows that plants and worms co-exist.  What about plants and worm holes?  Just what would happen if the caterwauling sound waves interacted with the holes left by worms?  MOUSES!  The very thought sent shivers down my spine.  And that's a lot of shivers 'cause we cats have a lot of spine 'cause...  you know...  we've got tails and all.

I knew I had to find the answer before the time-space continuum was damaged any further.  I put in a call to CBS thinkin' that that cat who disguises himself as Sheldon on The Big Bang Theory might be able to help.  He knows about space and time and whatnot, for sure.  He never got back to me.  Another call lost in space.  MOUSES!  You know...  I really need to check on my long distance service provider. So my brother Seville and I got into the lower kitchen cabinets and found a few things we thought we could use.  There was an egg beater, a mixing bowl, a rolling pin and a couple of other things only the peep could recognize.  Actually, I'm not even sure that she could but we'll give her the benefit of the doubt since she bought 'em and all.  I figured we could maybe construct a time-space distortion meter-reader thingy.  If only I knew that guy named MacGyver.  He'd know how to make one for sure.  And he would probably need a whisker or two 'cause whiskers are so good at detectin' so I sent my sister Connie out on patrol.  I had her look on all the kitty condos and in all the cat beds for any stray whiskers that may have been left behind.

Anywho...  As Seville and I were dragging the egg beater into the sunroom, a beam of light appeared.  It shone through the window, illuminating the very spot where the pot of time distorted agapanthus sat.  The egg beater didn't even have a chance to start spinning and metering and doin' whatever meter-reader thingies do.  Seville and I immediately knew the source of the time distorting waves.  And believe it or not...  the peep was not involved...   this time.

Time came to screeching halt.  Then it started moving backwards in slow motion.  It was like the sunroom had been sucked into that shaft of light from the sun and drawn towards the heavenly body itself.  In the nick of time we escaped the pull of the gravity well - the well that surely was causin' all those puddles of sun - and came hurtling back towards earth.  I began to recall the many times I had seen my brother Rushton sleeping in that pot...  in that pot of agapanthus...  my brother who must weigh close to twenty pounds.  He's a big boy is Rushton.  A big boy with a lot of fur.  He takes up a lot of room in the pot.  Not much room left for agapanthus, I do suspect.

So I had my answer.  Obviously, Rushton had managed to create his own little gravity well.  That gravity well must have distorted the time waves within the pot of agapanthus, preventing the plants from growing and then sending them backwards in time. 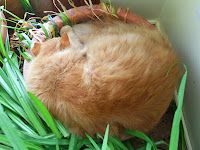 The good news is that the tears in space appear to have been confined to the one pot of agapanthus.  Thank goodness for that!  I'm thinkin' that those tears can be repaired with just a spool of thread and a needle.  I'll check with the peep.  She usually has some thread handy.  Wonder if the task will require any buttons.  Hmmm...  I like buttons.  They're fun to play with if you attach them to some twine and empty wooden spools.  I'll get the peep workin' on that right away.  Don't want the tear in space to rip any further into any more of the sunroom.  Might distort some of our sunpuddles or something and we simply can't have that, can we?
Posted by Seville at Nerissa's Life at 08:38