You all know 'bout the big guy in the bright red suit, right?  That would be Santa Claus.  And you all know how he has elves, right?  Well,what you might not know is this...  Most of those elves live up at the North Pole but there are a few livin' elsewhere.  They're just part-time elves, really.  It's called out-sourcing, I believe.

Anywho...  my peeps have been elfin' for Santa.  That's right...  my peeps.  Could you believe it?  Happens every year 'round this time.  The closer we get to December 25th, the more frantic the elfin' becomes.  And it has been pretty frantic, 'round here, as of late.  I can attest to that!  Luckily for us cats, the elfin' has appeared to have settled down a bit.

I'm sure the number one question on your minds is, "just what is this elfin' business?"  I can explain.

As you know, I'm kinda into the nip.  Nip toys are the best toys ever!  Nip mice, nip fish, nip biff bags...  they're all good.  Long as they contain nip, I'm a happy cat.  The rest of my fur-family are also into the nip big time.  We're just a clowder of lushes, I guess...  when it comes to the nip.  But for lushes, we're kind of particular about our nip.  We like the organic stuff.  And it must be fresh.  Well...  dried really...  but freshly dried!  Apparently, the peep has a couple of nip sources, capable of supplying the good stuff. 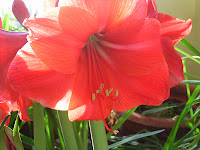 Around this time of year, the North Pole elves are pretty busy building train sets and baby dolls and whatnot so, luckily for Santa, he can hire my peep #1 to do a little part-time elfin'.  I don't think Santa pays her or anything for this elfin' work.  I think it's supposed to be an honour just to be asked, or something like that.  So, for the past couple of months, my peep #1 has been busy knitting up little toys that she then stuffs with the nip.  These are the very same toys, Santa will bring to us cats on Christmas Eve.  Neat, huh?  But wait...  it gets even better.

After the peep finishes her knittin' and stuffin' and whatnot, she puts all the toys in a big box.  Then she signals Santa that her elfin' work is done.  Believe it or not, I don't actually know the signal.  She has never told me.  It's top secret or somethin', I think.  Only elves know the secret signal.  But I have been doin' a little snoopin' and my peep has this red telephone tucked away in a closet.  I've never seen her use it.  I'm thinkin' that might be the direct line to Santa Claus.  Either him or the President of the United States.  One or the other, I am sure. 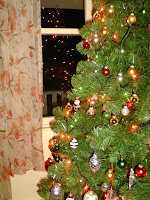 Once Santa gets the call, he sends a couple of flying reindeer over to our house.  The reindeer pick up the box of stuffed nip toys and head on back to the North Pole.  There, the toys are inspected by the Inspector Elves.  These are the elves in the upper echelons of the elf network.  They're in charge of quality control, of course.  My peep must be pretty good with her elfin' work 'cause she's never had any of her nip toys rejected.  Hmmm...  at least she's never told me 'bout that happening.  I'll have to just assume it hasn't.

Once inspected, the nip toys are sent along to the wrapping department at Elf Central.  Nip toys are always wrapped up in tissue paper.  That way, we cats can sniff out our prezzies on Christmas morning.  On each prezzie, a name is placed.  There are twelve of us cats so there are twelve prezzies in all.  Then they're put into Santa's sack for delivery on his big night.  The process sounds pretty simplistic but the peep tells me it's actually more complicated than that.  That's why Santa has to use his magic and all.  The magic makes everything work smoothly.  Plus, I think, the reindeer need it to fly.

Anywho...  the toys have been knitted and stuffed and the call to Santa was put in a couple of hours ago.  That means, the peeps' elfin' is done for another year.  The reindeer should be arriving any time now to pick up the box of toys and we cats can settle in and wait for Christmas morning when we can get into that nip! 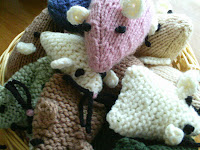 I suggested to the peeps, now that the elfin' was done and all, that they might wanna put on a little show for us cats.  I suggested they might wanna do a little song and dance.  I was even willing to choreograph the elfin' dance for them.  You know the sort of thing....   Shimmy to the right...  elf, welf.  Shimmy to the left...  elf, welf.   Spin in a circle.  Do a little back-flip.  Wiggle, wiggle, wiggle, wiggle, wiggle, wiggle, wiggle.  Jump up high.  Spin in mid-air.  Shake that booty.  Toss that pony tail.   Wiggle left.  Wiggle right.  Pas de chat.  Pas de chat.  Jazz paws!  Well, that suggestion didn't go over so well.  Peep #1 looked at me like I was crazy.  Peep #2 said I was.  MOUSES!  Apparently, elfin' peeps are even more temperamental than regular ol' peeps and you all know how temperamental regular ol' peeps can be.

I'm sorry I don't have any pictures of the peeps doin' the elfin' welfin' dance...  since they refused to do it.  So...  in lieu of the dance - gosh it would have been great - I'll just have to wish you all a VERY MERRY CHRISTMAS filled with love & cuddles and treats & nip.  Lots & lots of the nip!

MERRY CHRISTMAS EVERYONE!!!
Posted by Seville at Nerissa's Life at 10:50