Firstly, let me address this idea that he is a place.  This is not a reasonable idea, I think.  People say, "Houston, we have a problem."  Now, why would people say this if Houston were not a person?  People don't go around talking to places.  People talk to people.  Am I not correct?  I can assure you, I have never gone into my back yard and yelled out, "Hey, back yard!"  Nor have I gone into the kitchen and cried, "Hey there you kitchen!"  I have never done this in my entire life.  Not even in any of my entire nine lives.  Never, ever, ever.  In fact, if I were to do that, people would think I was crazy.  Would they not?

I believe my peeps may be confused because there is in fact a place called Houston.  I looked it up on the map.  Yes, it's there all right.  But there is no reason to believe that this place called Houston is the same as the person called Houston.  Peeps name their baby peeps after places all the time.  There are peeps out there named Dallas, Paris, London and what have you.  And by the way, they don't always stop at places.  Peeps name baby peeps after other things, too.  Things like months of the year, gemstones and fruit.  Yes, even fruit.  Peeps do this.  It's a fact.

So now that we're all in agreement that this Houston is in fact a person, let me address the part about his not being real.  I have heard peeps say, "Houston we have a problem."  I have heard it many a time.  I have heard it on the television.  I have heard it on different channels on the television.  If I spent more time going for rides in the car, where my peeps tend to listen to the radio, I'm sure I would hear it there, too.  If I spent more time at local coffee and doughnut shops, where I've heard that various peeps tend to gather in order to drink, eat and gossip, I'm sure I would hear it there, as well.  If I spent more time at political functions and whatnot, where peeps go to blather on and on and on for no reason I can possibly fathom, I'm sure I would hear them blathering on and on and on about this Houston fellow.  I'm quite sure of these things.  I'm as sure of this as I am of the whiskers on my face.  Everyone - and I mean everyone - tells this Houston they've got problems. 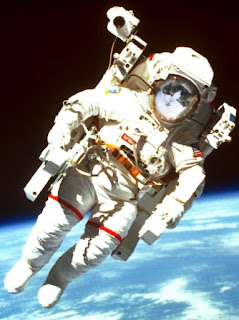 So if we were to believe that this Houston was not a real person, the peeps of this planet must all be suffering from some sort of a mass hallucination, I think.  This is the only reasonable theory available to me.  And to be perfectly honest, it's really not all that reasonable.  It's far more reasonable to believe that he is, in fact, real.  Is it not?  Yes, it is.  I'm so glad you agree with me.

Now that we have this matter settled.  It's time to discuss something far more important.

I still have a problem.  And even though I told this guy Houston all about it, my problem has not yet been solved.  There's still no one living up in the space station, reading my blog!  Houston, I repeat, we have a problem!!!

Thankfully my dear friend Sammy, author of the world famous blog onespoiledcat, has presented me with this incredible space suit.  I look very dapper in it, do I not?  Yes, I believe I do.  I am now prepared to go up to the space station myself and see what is the matter with the astronauts living there.  To ask them, for myself, why they are not reading my blog.  And let me tell you, they had better come up with some darned good answers.  I'm not going to accept any talk of mass hallucinations.  And once I discover the problem, I will inform this guy named Houston of it.  And if Houston doesn't come up with an appropriate solution...  well...  then for Houston, it's to the moon, baby...  to the moon!