and then it rained 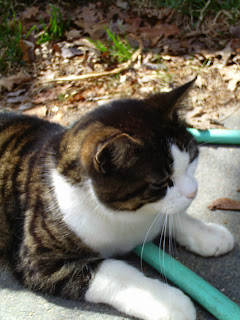 It's hot here in Nova Scotia.  Super-duper hot.  Not super in a good way, mind you.  Super in a like-it's-really-way-too-hot-and-I'm-really-not-happy-about-it kind of way.  Know what I mean?

Actually, many of my friends in the United States have been experiencing far hotter weather but for Canadian kitties like me, who aren't used to this kind of heat, it's pretty darned hot.  Also, once that ol' humidex thingy the weathermen have invented is used, then it gets really uncomfortable.  Especially for those of us wearing fur coats...  like us cats...  like me.

Like I said, it's hot.  But even though it has been humid and everything, there has been very little rain.  It has been really dry.  Way drier than I remember last summer to have been.  Last summer, I hardly ever had to send the peep outside to water my garden.  This summer, the sprinkler has been going full blast.  And that's even with all the mulching and stuff she does.  Of course, the peep would say we live in a sand pit.  I would say, then why can't I do my business outdoors instead of in those stinky ol' litter boxes you insist I use?  But I digress...

Late Saturday afternoon, it was 39C with the humidity factored in.  The peep headed out to set up the ol' sprinkler.  I practically had to push her out the door 'cause she was a little reluctant to go out in all that heat.  But it had to be done 'cause my plants were practically crying, they were so thirsty.  I watched the peep from a window.

The pansies and fuchsias on the veranda were the thirstiest so first she was gonna have to drag the hose over there and give them all a good drink.  She got the nozzle on the hose and turned on the tap and...  and...  and nothing!  Nope, not a drop of water in sight.  But I could hear the pump running - you know, with my excellent hearing and all - and I told her as much.  Well, she couldn't really hear me 'cause I was inside enjoying the cool air from a fan and she was outside in the blazing hot sun but eventually, she got the hint. 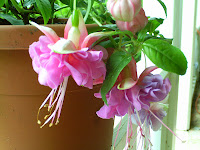 So the peep set out to find the problem and it wasn't long before she found it.  The hose was broken!  Yup, broken right in two.  Now, some of you might be thinking we cats had a little something to do with this but this time, you'd be wrong.  It wasn't us.  Don't know who did it, really.  Personally, I usually blame the peep when things go wrong but the peep isn't as likely to point the finger at herself. She says pointing is rude.  Pish posh.

Back to the hose.  Where two of the hoses had once been connected together, they were connected no more.  The metal parts had just come apart.  Age, I guess.  Hope the peep doesn't break in two like that when she gets old.  Actually, she's already pretty old, I think.  Way older than me, anyway, and I'm nine!

So on Sunday afternoon, off to the store the peep went on an emergency hose trip.  She came home with a big long hundred footer.  That should do the trick, she thought.  And it did.  She ran that ol' sprinkler for several hours Sunday evening, giving all the plants a good long drink. 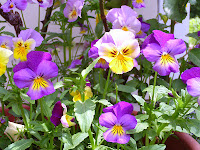 Monday morning...  it rained.  Hehehe...  All that effort in the blazing heat the day before, only for the rain to come after all.

When the rain stopped, I went outside and checked out a few puddles in the wet earth.  Then I came in and insisted that the peep pick me up for a little cuddle.  My paws were all wet, you see, and experience has taught me that most of the peep's clothing makes for good drying material.  The white tank top proved to be no exception to the rule.  The dirt from my paws along with some of my loose fur made a nice pattern on that top, once I was done with my cuddles.  Yes, very nice indeed.  I'll have her looking like a sterling silver tabby one of these days.  Actually, the top came pretty close to it Monday.  But that peep is so unappreciative.  Next day, I saw that very same top hanging out on the laundry line.  Some peeps just don't know what's good for them.  Peeps can be like that, I guess.  Hmmph!!!