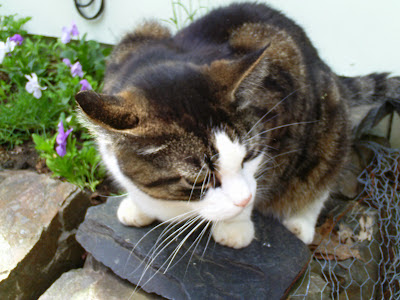 The peep grows trees for us.  As we're all allowed outside - providing that we stay in our own yard where it's safe, of course - having some trees in the garden for climbing is a pretty good thing.

Some of the trees were here before the peeps moved in.  Others the peep planted herself.  Some of them are just babies 'cause she's still starting trees every year.  Others are older than me and I'm nine so that's pretty old in cat years but maybe not so old in tree years.  Tree years are more complicated, I think.  Yeah, way more complicated.

There's this one tree in the middle of my front yard that's really, really big.  It's taller than the house by far.  Way taller than the peep, of course.  But the peep grew that tree from a teeny-tiny seed many, many years ago.  She says she planted that seed the first summer they lived in this house which was before I was born.  It was in the year 2000 which is like, oh...  eons and eons ago, I think.  Long before my time. 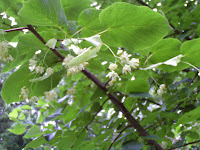 Well, this practically ancient tree was causing a bit of an uproar at my house 'cause the peep was all upset that it had never bloomed.  Personally, I didn't really care 'cause trees are for climbing not blooming but you know peeps.  She says she grew it specifically for the blooms which aren't very showy but are highly fragrant and magnets for the bees.  I thought I might be able to help her out on the flowery sniffing stuff but I wasn't too sure about turning it into a magnet.  I mean, magnets are made of metal, right?  Well, I don't think the peep realises it but...  trees are made out of wood.  That's a peep for ya!  And I'm beginning to wonder...  if she doesn't know the difference between metal and wood...  well...  perhaps all hope is lost, huh?

But back to the tree and this flowering business.  The tree is called a Tilia.  That's it's official botanical name.  I know 'cause I looked it up.  Most of the time though, the peeps just call it a linden 'cause that's its nickname.  I have a nickname, too.  Sometimes I get called Nissy or Nissy-poo even though my real and proper name is Nerissa.  My best friend Herman calls me Niss and I really like that one. 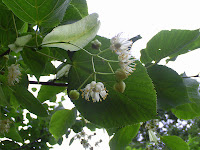 All these nicknames got me thinking.  What if the Tilia tree has more than one nickname, just like me?  So, I checked it out.  Actually, I just asked the peep.  She said that yes, sometimes people call these trees lime trees.  I said, "Limes?  Like in citrus?"  The peep reassured me that no, they were not any kind of citrus tree and that I needn't worry.  You see, we cats hate the citrus.  But peep #1 said that her grandmother from Scotland used to call linden trees, lime trees.

So I said to the peep, "Why don't you just lime that sucker?" although it's not actually a sucker.  I believe I mentioned it was a seedling.  Another topic for another post, I think. 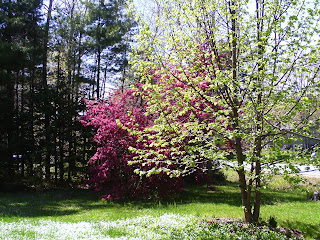 So last fall, the peep bought a big ol' bag of lime for the tree.  She gave that one tree the whole bag.  Actually, she went a little crazy with the lime and I had to say to her, "Whoa, Nellie!"  Not that the peep's name is Nelly or anything but that is what one says in situations like these, I think.  Bottom line is, the tree got well and truly limed.

Well folks, just guess what we have this year?  Flowers!  Lots and lots of flowers!  I wouldn't say the tree is covered completely in flowers but there are lots of them.  And when one goes from none to lots in one year...  well...  that's saying something, I think.  Oh, what a little gardening supervisor I am.  Purrs

Posted by Seville at Nerissa's Life at 09:38