it was already dead... honest!

Okay...  I kind of do know where it came from.  It came from where all mice come...  outside in the garden.  I mean, where else would it come from?  I'm not running some kind of mouse factory in the basement.  I didn't order it on-line.  And you peeps know darned well how I hate riding in the car so I sure as mouses didn't drive over to the mall and buy the mouse.  Clearly, the mouse came from the great outdoors.

And I guess I kind of do know how the mouse came to be inside our house, lying there in the middle of the kitchen floor.  Obviously, someone brought it inside.  No self respecting mouse has ever entered my house voluntarily.  I mean, I live with eleven other cats.  Plus, nosey neighbour cat visits on almost a daily basis.  You have to admit, he's a suspicious looking character if ever there was one.  And then there's the cat who came back.  Remember Carson?  So, that means I am only one for fourteen suspects.  And none of us are talking!

Wait a minute!  I'm one of sixteen suspects because there are a couple of peeps living in my house, as well.  Either one of them might have caught that mouse and brought it inside.  It would be just like a peep to do something like that and then blame one of us cats.  Just like a peep, indeed.  In fact, typical peep!  True to form, typical peep.  Mouses I've gotta get myself some new peeps, I think.

Peep #1...  when you came into the kitchen the other morning and saw me sniffing that ol' dead mouse lying there on the floor, all you saw me doing was sniffing.  You absolutely did not see me catching the mouse, killing the mouse, playing with the mouse or carrying the mouse around in my mouth.  You didn't see any of that stuff 'cause I didn't do any of that stuff.  It's all what they call circumstantial evidence.  Don't you pay attention to the television when Law & Order is on?  You need more than just the circumstantial kind of evidence, I think.  You need what they call the smoking gun.  Well, old peep of mine...  you don't have that smoking gun.  No smoke rising from my claws.  No sirree...  not a trace of smoke coming from my claws.  Probably...  most likely...  'CAUSE I DIDN'T DO IT!

And let me tell you something else.  When I came across the mouse that morning, lying there in the middle of the kitchen floor, it was already dead.  Didn't I mention that before?  Yes, I believe I did.  I didn't kill the mouse.  Someone else killed the mouse.  IT WASN'T ME!  HONEST!!!

And peep #1 o' mine...  had you really wanted to find the guilty culprit, you should have looked for the evidence right there and then.  I didn't see you doing any DNA tests on that mouse.  The mouse was probably covered in the saliva of the killer.  Did you check for saliva?  No, of course not.  Let's face it, Jessica Fletcher you are not! 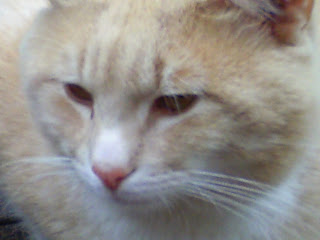 There could have been cat hair on that mouse and that cat hair might have led you to the killer.  But I can tell you this...  if there were any cat hairs, they weren't sterling silver tabby ones like mine.   'Cause when I came across the mouse, IT WAS ALREADY DEAD!  Didn't I mention that before?

For all I know, there might have been a long, 'medium golden brown' hair wrapped around that dead mouse.  That is the name of the colour on the box of stuff you use to cover up all that grey, right?  I see no reason - no reason at all - why you, peep #1, should be eliminated from the list of suspects.

Posted by Seville at Nerissa's Life at 09:07