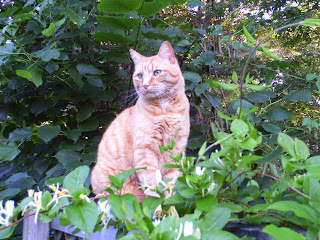 That's right...  the hummers have arrived!  Oh I'm so excited.

For those of you who aren't cats or gardeners, hummers are what I call, hummingbirds.  They're one of my favourite kinds of birds, too.  I don't chase 'em or catch 'em or anything naughty like that.  They're just fun to watch.  Really, really fun.

I would have included a picture of a hummer in my post today but let's face it...  that would require the peep to be a fairly decent photographer and, I'm afraid, that she isn't.  I mean, she can barely get me to cooperate with her picture taking endeavours and I'm a well behaved cooperative cat so...  how on earth is she gonna get a picture of a hummer?  It's a question that must be asked although I've already hinted at the answer...  she isn't!

The reason hummers are such fun to watch is that they can zip here and zip there and zip just about everywhere.  I live kind of near an air force base and sometimes, there are jet planes that fly overhead.  The fighter kind of jets you see on the television and movies.  Those fighter jets are a lot like hummers, I think.  They can zip and zap all sorts of places as well.  The biggest difference I can tell is that the planes are way up in the sky and never zip around in my garden.  The peep says this is a good thing but I wouldn't mind getting a closer look at one of those mechanical hummers.  Maybe someday I'll get the peep to take me over to that air force base to check 'em out.  On the other hand, that would likely involve a car ride and I am not a fan of car rides so...  scratch that idea.  I'll just watch my non-mechanical hummers.  They zip around in my garden all the time.  No car ride necessary.

As far as I can tell, when a hummer finds food, he or she stops imitating a fighter jet and turns into a helicopter mimic.  He hovers there by the flowers and eats and eats and eats 'til he can eat no more, I think.  He just gobbles up all that sweet nectar from his favourite flowers and whatnot.  On the other hand, if the hummers hover, maybe they're mimicking UFOs and not helicopters.  Hmmm...  I'll have a think and get back to you on that one. 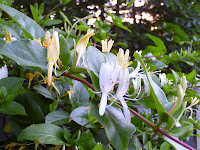 I should tell you that, in order to have hummingbirds visit your garden, you have to grow something they like.  Now, the peep is not too great with the picture taking - I believe I already mentioned that - but, I have to admit, she does grow one of my hummer friends' favourite flowers...  HONEYSUCKLE!  And the honeysuckles are in full bloom right now so my hummers are having an all-you-can-eat buffet...  whatever that is.

In my garden, the peep grows two kinds of honeysuckles for my hummers and me.  I'm including a picture of one but for some reason, the peep didn't take a picture of the other.  Don't know why.  Oh, yes I do...  I believe I told you 'bout her incompetence with the camera?  MOUSES!  I have got to do something 'bout that peep!  Anywho...  the picture she did take for me is kind of pretty, I think.  What you probably can't see in the picture is that they smell absolutely delicious.  Peep says they smell like orange blossoms but I'm not sure if I believe her or not.  I know what an orange smells like and it's not anything like that.  I would know 'cause I'm a cat and cats don't like oranges but I quite enjoy the smell of the honeysuckle.  So does my brother Seville, as you can probably tell from the pictures.

One other thing 'bout hummers is that, if you're not careful, they'll zing ya!  They never zing me 'cause I'm their friend and all but I've seem 'em zing the peep.  Sometimes, they'll be zipping around the garden so fast they can't keep track of where they're going or something - I guess - and they practically dive bomb the peep.  That's one of the funniest sights to see.  Afterwards, the peep does a little dance or something.  At least I think she's dancing.  It involves some ducking and spinning and her arms flailing around in the air and whatnot.  I've seen other peeps dance on the television and I have to say, she doesn't really dance like they do but...  well...  I just don't know how else to describe it.  Peeps do such odd things, you know.  Hard to keep track, quite honestly.  I'm sure you all know what I mean. 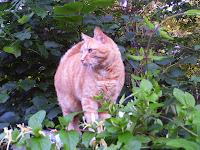 So anywho...  if you wanna have some fun in your garden, plant some honeysuckle and invite the hummers over for a meal or two.  They'll entertain you for hours on end.  And when you're done watching the hummers, you can watch your peeps do their little hummer-zinging dance.  You'll trip over your tail from laughing so hard watching that one.  I can promise you that!