they were doing her a favour! 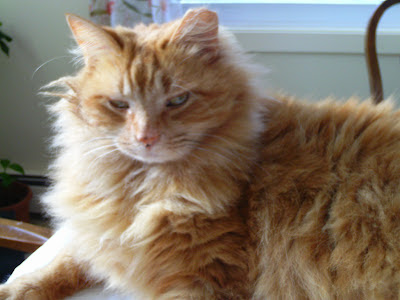 The weather here hasn't been all that great.  Not great at all.  Well, today is looking pretty decent and yesterday and the day before were kind of nice but on the weekend?  Well, let's just say that the weekend was pretty icky.

I didn't find a single sun puddle last weekend.  Nope, not a single one.  I looked and looked and looked but all my looking was in vain.  The sun was shy or something 'cause he was refusing to show his face, here, in these parts.  I don't know about you, but I find this to be pretty unacceptable behaviour on the the part of the sun.

The peep on the other hand was complaining 'cause it wasn't raining.  Complaining 'cause it wasn't raining?  That's the most ridiculous thing I've ever heard.  Who wants it to rain?  MOUSES!  Only a peep could come up with that one.  There was my peep wandering around, head up in some weird position as she stared at the sky, saying stuff like, "it looks like it's going to rain" and "it feels like it's going to rain" and my personal favourite, "didn't the weatherman say it was going to rain?"  Hehehe...  believing what the weatherman on television says.  When will peeps ever learn?

The peep did have a point though.  It did kind of look like rain.  It was cloudy all weekend.  And a little bit of the wet stuff did fall from the sky but not enough to call it rain.  Not enough to give the garden a drink.  I imagine the wet stuff pretty much just evaporated on contact with the ground.  Oh well, time for the garden hose.  Luckily, I don't have to deal with that sort of thing.  I didn't even have to supervise.  No, just pushed the peep out the door and said, "go water my garden!"  She dealt with dragging the hose around and whatnot.

So that was my weekend weather update:  lots of clouds,  no rain and most importantly and most upsetting...  NO SUN PUDDLES!

But then on Monday, it cleared up and the sun decided to show his face...  FINALLY!  It wasn't very hot but we cats had been pretty much cooped up in the house for the whole weekend - due to the threat of wet stuff - so we decided to take advantage of the situation.

That evening, when it was time for the sun to head off to bed, we cats didn't feel much like coming inside.  By midnight, the peep had managed to entice everyone in but my sister Beatrice and my brother Rushton.  There was no sign of either of them so out the peep headed in her nightgown, carrying a flashlight.  It was a pretty funny sight.  Oh, who am I kidding?  It was hilarious!  I have to wonder what the neighbours think 'bout my peep's nightly constitutionals.  Yes, constitutionals as in plural.  This has happened before.  This was the first time this year but you've gotta start somewhere.  It's still early in the summer.  By mid-summer, she'll be having these little outings in her nightgown two, maybe three times a week.  I wonder if the neighbours stay up late just to see the sight.  Could be...  like I said...  it's pretty funny.

Of course, the peep doesn't consider this stuff to be funny.  She gets all huffy and annoyed 'bout the whole situation.  I really don't know why 'cause it gives her a chance to get out and get some fresh air and stuff and that's a good thing, if you ask me.

And the best part is this.  The other night...  when the peep headed out into the great dark unknown...  she smelled the most delightful scent.  As she walked along the path leading from my front door, the scent of superb pinks hit her like a tonne of bricks.  But it was the good kind of tonne of bricks.  The kind that you want to have hit you right smack dab in the middle of your nose.  Right where you have all those olfactory sense thingies.  Superb pinks smell delightful.  Even us cats think so.  And I know the peep loves the scent 'cause that's why she grows the things in the first place.  I also know that they smell best at night.  So, if the peep hadn't been wandering about aimlessly in her nightie in the middle of the night looking for Beatrice and Rushton, she would never have experienced the wonderful scent of the pinks.  In a way..  you could say...  they were doing her a favour!

Posted by Seville at Nerissa's Life at 08:31